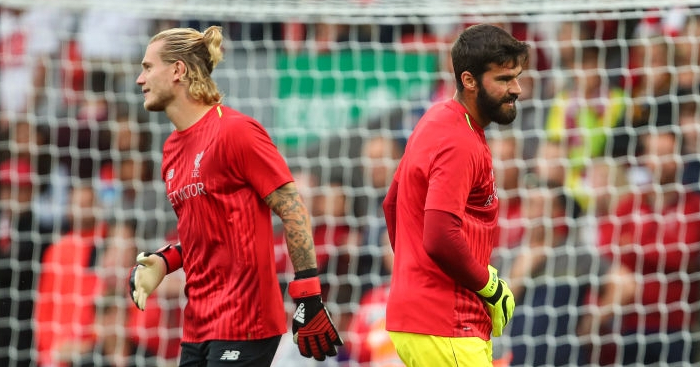 To qualify for this list, the replacement must have been signed in the same transfer window that their predecessor was flogged off. That’s the bloody point.

Loris Karius to Alisson
It was as late as July 7 that the Liverpool Echo reported that Loris Karius seemed likely to ‘retain his place’ as the club’s first-choice goalkeeper. Later that day, everything changed. Another mistake in a pre-season victory over Chester – or rather the reaction to it – helped Jurgen Klopp realise that his compatriot’s Champions League final hangover was more of an affliction problem.

Less than a fortnight later, Alisson became the most expensive shot-stopper ever. “There was a world-class goalkeeper on the market, and the club gave us the opportunity to sign him – simple as that,” Klopp said, his ruthless streak finally emerging beyond the ruffled hair and cartoonish grin.

The ‘final straw’ for Karius had apparently been his public response to setback, but his demotion was a long time coming. Within 37 days of Alisson’s arrival, he was loaned out to Besiktas on a two-season deal.

Liverpool can have no regrets. Alisson has kept ten clean sheets in 16 Premier League games, compared to Karius’ record of 13 clean sheets in 29. Alisson has already made more Premier League saves this season (36) than Karius managed last campaign (31). And Liverpool concede at a rate of 0.59 goals per game with Alisson, compared to 0.96 with Karius.

The difference is huge. Much of that is down to the imperious Virgil van Dijk and a slight shift in approach from the manager, yet the move from solid but error-prone goalkeeper to one of the best in the game right now has been the biggest evolution of all.

Jo to Sergio Aguero
Manchester City’s transformation from perennial also-rans to front-runners is a lesson in how to gradually upgrade every individual component to improve the overall machine. Mark Hughes was replaced by Roberto Mancini, then Manuel Pellegrini and now Pep Guardiola. Vedran Corluka was sold just over one week after Vincent Kompany joined, while David Silva and Yaya Toure were an instant succession of steps up from Stephen Ireland and Nigel de Jong. Even the move to the City of Manchester Stadium helped plant a seed that continues to grow at an alarming rate over a decade on.

Perhaps the most immediate and lasting improvement came in the summer of 2011, when Sergio Aguero made his grand entrance from Atletico Madrid just eight days after Jo had scuttled out of one of the Etihad Stadium’s side doors. The Brazilian had managed to score only six goals in 42 games; Aguero had matched that tally within 70 minutes of his fourth appearance.

Jody Morris to Claude Makelele
On July 2, Roman Abramovich finalised his takeover of Chelsea. Sixteen days later, Jody Morris became the third of an eventual five players culled by Claudio Ranieri that summer. By August 31, Claude Makelele was the 13th signing of a revolutionary transfer window at Stamford Bridge.

He was anything but unlucky. Morris was a fine player and, as legend has it, was once described by Xavi as his toughest opponent. But Makelele was on another level, a midfielder who would quite literally come to define the role over the course of five years in south west London.

The “entire engine” that Zinedine Zidane was so reluctant for Real Madrid to lose, Makelele became crucial under first Ranieri then Jose Mourinho. A winner of two Premier League titles, the Frenchman still has one of the best win percentages England’s top flight has ever seen.

Jody Morris might have dominated a young Xavi, but he could barely hold a candle to Makelele’s ever-lasting defensive midfield flame. And that is no insult.

Diego Forlan to Wayne Rooney
The Premier League regrettably never quite saw Diego Forlan at anything close to his brilliant best. The Uruguayan reached double figures for goals in nine of 11 seasons after turning 21 in 2000. The only two anomalies were his two full campaigns at Manchester United.

The forward started out at Independiente, rehabilitated his career with Villarreal and thrived at Atletico Madrid before indulging himself with moves to Internacional, Cerezo Osaka, Penarol, Mumbai City and Kitchee. At international level, a Copa America and a World Cup Golden Ball is a fine return.

United are the only blot on an otherwise enjoyable copybook. Forlan might well have made the Scousers cry, but he did precious little else for two-and-a-half years. He scored 17 goals in 98 games in Manchester; Wayne Rooney scored as many in his first season alone.

“I was very young at Manchester United and I feel that I was just starting to find my feet when I was sold and Rooney was brought in,” Forlan would later say of a player who joined just 11 days after he left for Spain. “If we had been paired together I think we could have formed the most devastating strike partnership in Europe but it wasn’t to be.”

In an alternate reality, Forlan might have benefited from being paired with a young, selfless, brilliant forward as opposed to playing second-fiddle to Ruud van Nistelrooy. As it is, Rooney joining as his replacement was best for all concerned.

Tim Sherwood to Mauricio Pochettino
“The record’s good. It is better than any Premier League manager in the history of this club. There has been no-one at this club who has done a better job at the Premier League. My record stands for itself.”

In pure statistical terms, Tim Sherwood had something approaching a point. His 59% Premier League win percentage was indeed the highest of any manager in the history of the club, he guided them to Europa League qualification after the early-season struggles of Andre Villas-Boas, and he helped them finish above Manchester United for the first time since 1990.

But Tottenham never grew during Sherwood’s tenure. They never showed any signs of developing into anything more meaningful – hence his 18-month contract was cut short after just five. He deserves credit for standing still instead of taking them backwards, but England’s sixth-best team simply finished sixth.

It was only when Mauricio Pochettino arrived that Tottenham’s potential became reality. Thirteen days after Sherwood was sacked, the club made one of the most important and impressive managerial appointments in modern history. Bluster was replaced with brilliance, swagger was swapped for substance, and egotism gave way to erudition. Tottenham had finally grown up, and they have not looked back since.