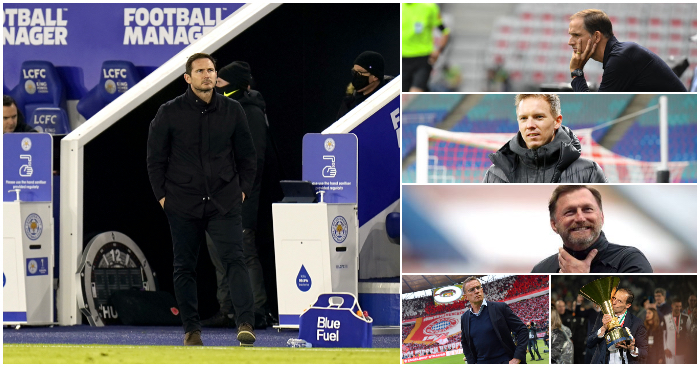 Chelsea will reportedly target a German-speaking manager to replace Frank Lampard. ‘The presence of Kai Havertz and Timo Werner in the ranks, players signed over the summer at huge expense’ is said to be behind the ‘logic driving their thinking’, according to The Athletic. Presumably the Chelsea boffins are aware that both Werner and Havertz speak perfectly good English and have taken that into account while making their logical decisions.

Anyway, fortunately many of the hottest managerial prospects around do speak German, many of whom are said to be on Chelsea’s radar. Here are five other (more logical) attributes that should be on the Blues’ checklist for their next manager. If it reads more like a critique of Lampard, that’s because it absolutely is…

Experience
No matter who you are or what you do there is always going to be an element of learning on the job – it’s a part of life. As you become more experienced, you hone your skills and learn progressively less. For the most part, managers of top clubs have had an opportunity to make their mistakes in lesser roles or at lesser clubs.

Has John Terry made mistakes at Aston Villa this season? Probably. Do we know? No. So do we care? No.

Lampard has made those rookie errors at his end-game club, in front prying eyes, with no-one to blame (though he has tried) but himself.

Sure, there are examples of world-class managers who – like Lampard – have had to learn on their dream job. But the likes of Pep Guardiola are very much the exception rather than the rule. And he had Lionel Messi.

Barcelona got lucky in a way. Despite a season with the B team, Guardiola was a risk, as Lampard was for Chelsea – a club that has usually, historically dealt in surety rather than pie in the sky ideals.

A Klopp-esque dynasty was an alluring prospect and remains one. Hiring a club legend was worth a shot – it would have been wonderful had it worked – but it always seemed too good to be true and there were and are plenty of very qualified managers far more suited to being the figurehead of such a project. Maurizio Sarri was one; Ralph Hasenhuttl has already explained why he could well be another.

These were Lampard’s comments after the defeat to Arsenal, but could easily have been the post-match interview after the Leicester loss or even the Fulham victory.

It definitely is about tactics (more on that later) but let’s for now focus on his staggering inability to recognise that one of any manager’s major roles is to effectively motivate the players. He’s right, there has been an alarming lack of effort from everyone but Mason Mount in an alarming number of games this season, but if saying ‘run more’ doesn’t work, perhaps a slightly more psychologically astute motivational tactic would.

Lampard has said he wants his management style to be an amalgam of the best traits of those he has worked under. He’s previously hailed the level-headed personal touches of Carlo Ancelotti and the unquestionable belief of Jose Mourinho, who told Lampard he was the best player in the world when he arrived at Stamford Bridge.

He seems to be caught in a weird middle ground between the two styles. His very literal interpretation of Ancelotti’s method means he has actually said he’s trying not to be “too up” when things are going well or too down when things aren’t. But the extreme alteration in his general demeanour and facial expressions reveals his true feelings, as does the contradictory content of what else he says.

And yes, digging out your players for a lack of effort is very Mourinho, but the team Mourinho next put out would sure as sh*t be running their asses off – they don’t play otherwise – and there’s a sense that the lines of what’s acceptable and what’s not are very clearly drawn in Mourinho’s teams. Lampard will insist the same is true at Chelsea, but that message has clearly been lost in translation. Scheisse!

In-game management
“Credit to the manager as well,” James Maddison said after Leicester’s win over Chelsea. “We had a little switch at half-time to go to a 4-4-2 out of possession, 4-3-3 in possession still.”

That was Brendan Rodgers and that is in-game management – the ability to recognise an area of weakness in your team or a chance to expose a weakness in the opposition and changing accordingly. Any manager can pick a team; decent managers recognise their errors and alter them in real time.

Lampard doesn’t do this, he sticks to his plan and watches it fail. Even his substitutions look suspiciously predetermined and – as a result – often completely ineffective.

Take Tuesday night as an example. Reece James was left on but should have been taken off. Kai Havertz was taken off but should have been left on. Mason Mount was unsurprisingly completely knackered after an hour – as he was the only one who gave a flying f*** – but was left on for the full 90 minutes, as was Mateo Kovacic, despite him giving the fewest f***s of anyone. And he only made two substitutions.

It was as though – like his players – he had already given up.

Team consistency
Lampard is yet to name an unchanged side in the Premier League this season. Injuries have played a part in that, as has the integration of the new signings into the team. But not once? Not even through their nine-game unbeaten run?

How can Lampard expect any consistency in performance if there is none in his selection?

Obviously it’s difficult not to make significant alterations when you’re losing and that is absolutely what has been required in recent weeks. But it doesn’t have to be changes in personnel…

Tactical flexibility
His unwillingness to budge from 4-3-3 is painful. A starting place for Havertz on Tuesday sparked hope, but that quickly vanished as the German slotted in alongside Callum Hudson-Odoi and Reece James on a ludicrously crowded right side, with a gaping hole in the middle begging for late runs from an attacking midfielder.

This is different to sticking to an ethos. Klopp or Guardiola don’t waver from their footballing ideals, but they also don’t blindly stick with one formation that clearly isn’t working. What were the “big elements” Lampard and his team were working on before the Fulham game?

What makes it all the more nonsensical is that the formation blatantly doesn’t suit the very expensive players signed in the summer. Trying to fit new players into your preferred formation makes total sense. If those players can’t adapt to those new positions but you’re winning with others, then sticking with that formation still makes sense. The new guys will be forced to adapt; it’s survival of the fittest.

But if the new guys can’t adapt to those positions and you can’t win with the other players, then why the hell would you continue to persist? Try something different: two up front? A diamond? 4-2-3-1? Just anything else.