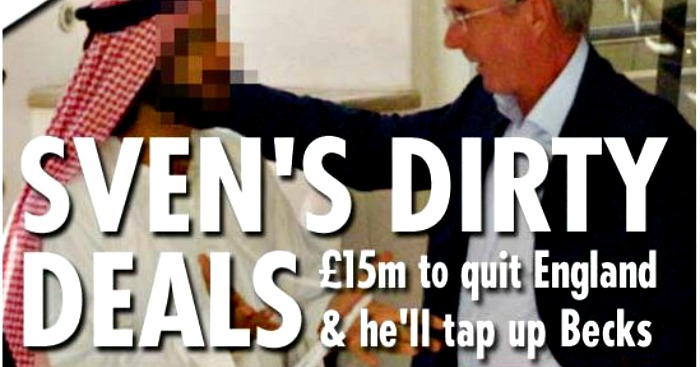 Sam Allardyce’s future as England manager is hanging in the balance after he made controversial comments during a series of secretly-filmed conversations with an undercover reporter. But he is not the first Three Lions boss to court rather public controversy. And he probably won’t be the last, either.

Glenn Hoddle
If the Football Association do deem Allardyce’s crimes grave enough to warrant his dismissal, he would become only the third England manager in history to be sacked. Steve McClaren suffered that ignominious fate in 2007, but Glenn Hoddle was the first to leave the post against his wishes.

It is testament to Hoddle’s standing in the game and among his peers that he remains a vocal and respected figure in football. His belief in ‘alternative methods’ – namely the reliance on faith healer Eileen Drewery – had brought criticism, but nothing overly controversial. That is until an interview with The Times in January 1999, three years into his tenure.

“You and I have been physically given two hands and two legs and half-decent brains. Some people have not been born like that for a reason. The karma is working from another lifetime. What you reap, you have to sow.”

Hoddle added his belief that people were reincarnated “to learn and face some of the things you have done – good and bad”. He vehemently denied ever making the comments, claiming they were “turned on their head…misconstrued, misinterpreted”. The Times, and journalist Matt Dickinson in particular, rejected the claims. Hoddle insisted he would not resign as England manager, despite widespread public censure.

But the damage had been done. Three days after the interview was published, the FA sacked Hoddle. He can now be found saying silly things – although not abhorrent and wholly offensive things – on television. He is also fifth favourite with bookmakers to replace Allardyce. Wonderful.

Terry Venables
Ask any England fan of a certain age what their favourite international tournament is, and there will generally be just one answer. Euro ’96 was wonderful for a number of reasons – football came home, Patrik Berger and Karel Poborsky happened, and Croatia had that delightful kit – but it was also the last time England, as a nation, truly believed.

The Three Lions reached the semi-finals on home soil, inspired by the goals of Alan Shearer, but guided under the management of Terry Venables. But it is often forgotten that Terence Frederick was coaching under a cloud of upcoming court cases and police inquiries.

Venables had been appointed in 1994, but, after the inability to qualify for that year’s World Cup, as well as automatic qualification for the following European Championships, he did not manage a competitive game until his second – and final – year. His questionable business dealings, allegations of accepting bungs in player transfers and legal wrangles with Alan Sugar meant that, for some, he was never a popular choice to manage his country. Five months before Euro ’96, he announced he would leave his post as England manager. He did so not as a figure of controversy, but as a key part of an iconic national side.

Fabio Capello
But who wants insults aimed at the disabled or potentially illegal business activities when you can have an ultimately harmless player ratings system?

It is strange to look back at 2010 and witness just how much of an uproar was brought about by the ‘Capello Index’. Its first mention in the media – in an article by The Guardian – referenced it simply as a measure of playing performance. That was on May 10, 2010, a month before the start of the World Cup.

A mere day later, Capello had announced his provisional 30-man squad for the tournament in South Africa, and the Capello Index was now branded ‘controversial’ by The Guardian, the Daily Mail, the BBC and many more.

The main crime the ‘Capello Index’ committed was that it put players’ noses out of joint. As a ‘senior England player’ told The Sun: “Now the players want to know when they’ll get the chance to mark him. There was an easy way to avoid all this — don’t mark the players in the first place.”

Capello and England would endure a difficult World Cup 2010, and the Italian would leave of his own accord mere months before Euro 2012. He was never a popular figure as England manager, and his Index, however inconsequential, did not help matters.

If you remain unconvinced, that point is typified by the respective newspaper ‘stings’ they suffered during their tenures. Allardyce seemingly drank a pint of wine as he mocked a fellow manager’s speech impediment and agreed a £400,000 deal to become a football spokesperson. A decade ago, Eriksson discussed his wish to leave England at the end of his contract while, in the words of The Guardian, ‘enjoying lobster and £900-worth of vintage champagne’. Polar opposites.

As 'newspaper stings' go, Allardyce is no Sven. pic.twitter.com/f0sFmPCNkS

When one thinks of Eriksson, they automatically think not of his impressive managerial CV, but of his reputation as a ladies’ man, of someone drinking champagne at 10am, celebrating life, and of the ‘fake Sheikh’. It was in January 2006, months before the commencement of the World Cup in Germany, that Eriksson fell foul of undercover reporting from the now defunct News of the World.

The Swede made clear his intention to leave his post after the World Cup, potentially for Dubai, as well as discussing David Beckham, Michael Owen and his desire to manage Aston Villa. Nothing controversial, indeed, and nothing truly damning. But something embarrassing enough for many to question his role. The FA, to their credit, insisted that Eriksson still had their “the full support” in a later statement.

In an interview a year after he did indeed leave as England manager after being knocked out of the World Cup at the quarter-final stage, Eriksson blamed the News of the World’s story for his exit.

“The real reason I left was because of a newspaper story about Dubai,” he said in May 2007, “and of course what was written in those stories was not true – or a lot of it. It’s very easy for a newspaper if they want to hurt you to do it”. Some things never change.

Harry Redknapp
The football world may have been robbed of the chance to witness an England side in Henry James Redknapp’s image, but it almost came to fruition in early 2012. With Fabio Capello’s sudden resignation as manager, the then-Tottenham boss was quickly installed as the bookmakers’, the fans’, the players’ and the pundits’ choice for the job.

Alan Shearer dubbed him as the “outstanding candidate”. Sir Alex Ferguson claimed he was “the best man” for the job. The Daily Mail’s Martin Samuel wrote that he was ‘the only show in town’. Gareth Southgate backed Redknapp’s cause, which was the biggest praise of all. Hodgson, a distant second favourite to replace Capello, added that “Harry’s receiving all the backing from virtually all quarters”.

It seemed a guarantee, but there was one small problem. On the day of Capello’s resignation, Redknapp had only just been acquitted of two counts of cheating the public revenue. After a two-week long court case involving Monaco-based bank accounts, revelations of not being able to read, write or use a mobile phone and a dog named Rosie, Redknapp emerged apparently unaffected.

The Football Association had other ideas, however. England handed the job to Hodgson within a matter of weeks, and Tottenham sacked Redknapp at the end of the season.