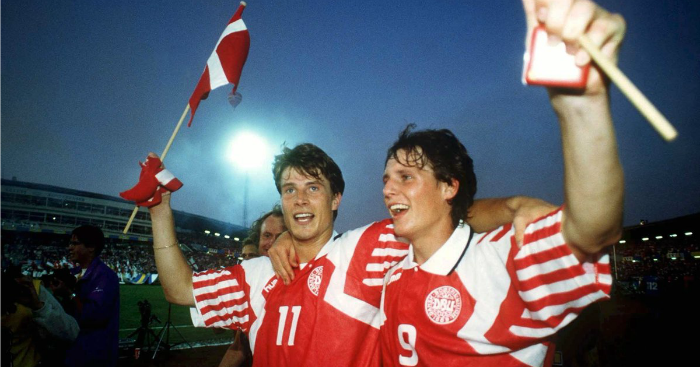 After the manner in which Wales and Iceland have captured the hearts of Europe (metaphorically, at least) during Euro 2016, we choose five other teams who got everyone rooting for them…

Cameroon (World Cup ‘90)
With Nigeria in 1994 and 1998, Senegal in 2002 and Ghana in 2010, Africa has done a produced line in heartwarming tournament teams over the last two decades. Yet those three were only following the wonderful example set by Cameroon in 1990.

The Wikipedia page for Italia ‘90 provides its tournament review under three headings: ‘Negative tactics’, ‘All-champion final four’ and ‘Emergence of Cameroon’. They were a breath of fresh air in a tournament littered with attritional games.

Cameroon beat holders Argentina in their first game, topping a group that also included European Championship finalists USSR and Romania, before beating Colombia and losing to England after extra-time in the quarter-final. The only non-England memory I have of the whole tournament is Roger Milla’s glorious dance.

Croatia (World Cup ‘98)
Croatia had laid the foundations for cult status in 1996, when the red and white chequerboard became scorched onto our footballing psyche. If Davor Suker’s stupendous chip over Peter Schmeichel left us desperate for more, the World Cup in France sated our appetites.

Croatia’s run to the quarter-finals in France was hardly met with great fanfare. Miroslav Blažević’s side beat Japan and Jamaica but lost to Argentina. England’s failure to win their group meant Croatia were able to beat a well-fancied Romania team to set up a tie against Germany. That’s when the magic happened.

Two years after winning the European Championship, Germany were embarrassed by Croatia in one of the best major tournament performances in the last 20 years. From the moment Christian Worns was sent off after 40 minutes, Croatia ran wild, scoring three unanswered goals.

Denmark (Euro ‘92)
A fairytale in which the wonder was not sourced via the rise of nobodies to somebodies (for Denmark’s team contained some excellent players), but the unlikely series of events that even made it a possibility.

With Yugoslavia in civil war, Denmark were given a week to prepare for the European Championship, and placed in a group with Sweden, England and France. A 0-0 draw was followed by a defeat to their Scandinavian neighbours. Only victory over France would take them through; of course they achieved it.

When Denmark followed up that triumph with victories over the holders (Netherlands) and overwhelming favourites (Germany) to lift the trophy, a continent rejoiced. In the space of two weeks, Denmark had established themselves as one of the world’s most renowned cult teams. As with Wales, this was a victory for the power of team spirit over individual brilliance.

Iraq (Asian Cup ‘07)
The greatest major tournament victory in international football history, bar none. Sorry Greece, you can sit back down.

Nobody had given Iraq a chance. Not of pulling a squad together and focusing on football. Not of progressing into the latter stages of the tournament from a group containing Australia. Not of beating Saudi Arabia in the final. Against a backdrop of a nation being torn apart by civil war and sectarian violence, Iraq brought a country together.

It may have only been for a few hours before another bomb blast killed 50 people, but in Baghdad the crowd gathered to celebrate. All troubles were forgotten during the blissful moments of celebration, and players shed uncontrollable tears on the pitch. The next time anyone tells you it’s only a game, show them this video.

Let me bring to you my favourite ever piece of football commentary, taken from that video. Try not to get the tingles:

Brazil (World Cup ‘82)
Until now, this list contains those countries whose heartwarming status comes at least partly through their over-achievement. With the Brazil squad of 1982, the opposite is true. There is an argument for labeling that Brazil team as the greatest in World Cup history, and they didn’t even reach the final.

Rather than be cheered by their success through adversity, with Brazil’s 1982 squad you just applauded the magnificence in open-mouthed amazement. Before the age of information, this was a team about whom precious little was known in detail. To watch Zico, Cerezo, Socrates and Falcao play together must have been to experience a footballing epiphany. This was a different sport to that played in England.

When the BBC commissioned a review of the tournament six months after its end, it was left to Jimmy Hill to remark upon Brazil’s glorious exit in typically simple style: “Brilliant, weren’t they?”. Failure has never been so sexy.