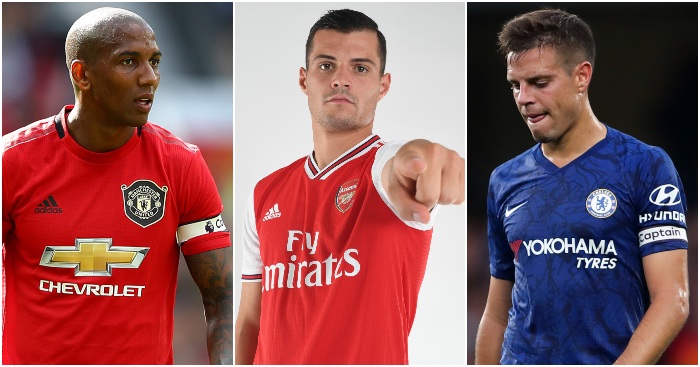 “We were scared in the second half. We knew they would come at us and push us hard…”

The Arsenal captain there, admitting that his side were cowering before the Premier League’s bottom-placed side while holding a 2-0 half-time lead. It’s bad enough thinking it, Xhaka. For the love of God, don’t say it.

It’s just the latest charge on the rap sheet Arsenal fans hold on Xhaka, who somehow retains the faith of Unai Emery despite his obvious flaws.

Arsenal fans and pundits have been lining up to suggest who should take the armband off the Switzerland midfielder. Paul Merson even said David Luiz is a better option: “People have a go at him because one week he’ll be 2/10 and the next a 9/10, but he’s going to play every week.”

The picture really is that grim. Xhaka had one of his better seasons last year in Emery’s first campaign and though he can be a tidy midfielder with an appetite to shoot from, well, everywhere, he makes far too many mistakes and appears to lack the mental stability required to lead. It adds to the batsh*t mental, mind.

Ashley Young (Manchester United)
“When Ash starts, he’ll be carrying the armband,” said Ole Gunnar Solskjaer in pre-season, and though the United armband is continually tossed around, it seems the only consistency around the captaincy is that when Young plays, Young leads.

That boils a lot of piss among United fans. There remain vast swathes of supporters who Young has never won over at Old Trafford since moving to the club from Aston Villa in 2011. Good enough for Sir Alex Ferguson, David Moyes, Louis van Gaal, Jose Mourinho and Solskjaer to trust but to many, his face just doesn’t fit.

It’s water off a duck’s back to Young now, but for a long time, he must have wondered why he was the one targeted for such vitriol. There are a lot of parallels between his status and that of Marouane Fellaini, who was seen as a symbol of United’s decline. Young, like Fellaini, has many more talented team-mates but few with a similar appetite for graft.

Who are the alternatives for the captaincy? The obvious one is Harry McGuire and no doubt in a year or so, he will assume the role. David De Gea has taken the armband three times this term but while his laid-back manner is an asset to his position in the United goal, many feel that his brand of quiet leadership is a little too quiet for a club accustomed to characters like Bryan Robson, Steve Bruce and Roy Keane. Paul Pogba was handed the armband by Jose Mourinho a year ago in lieu of an olive branch which, metaphorically (probably), he wiped his arse with.

That's what a captain is, he is responsible to instill a mindset into the players.
Meanwhile we have Ashley Young leading the side,who can't even string a proper cross,let alone instilling proper mindset https://t.co/dJRuuZBEGi

Cesar Azpilicueta (Chelsea)
Once the armband had been wrenched off John Terry’s left bicep, Gary Cahill assumed the role of Chelsea captain, even while he was frozen out by Maurizio Sarri. In his absence around the squad on a match-day, Azpilicueta carried the armband, almost by default. Upon Cahill’s departure this summer, it has been left in the Spaniard’s possession.

The only problem here is that many Chelsea fans don’t believe Azpilicueta deserves his place in Frank Lampard’s side, let alone be leading it out. Azpilicueta has had a ropey start to the season at right-back, with the draw against Sheffield United a particular low point.

Lampard acknowledged the criticism of his captain but the Blues boss is not yet ready to drop his former team-mate. “I played with Azpilicueta and I know him well,” Lampard said after dropping points to the newly promoted Blades. “He’s the first person to stand up which is the reason he’s captain because of that professionalism and attitude. I’m hugely behind him.”

That backing does not seem to extend to the stands at Stamford Bridge. Many fans would prefer Reece James to be given an extended run in the side, while a clamour is building for a midfielder to take the armband. And we all know that Twitter is the most accurate gauge of what the match-day fan is thinking…

The day Jorginho becomes captain will be a glorious one https://t.co/j7fRQSPziv

Aaron Cresswell (West Ham)
If you ask West Ham fans, they’d probably agree with Manuel Pellegrini over his decision to sit Cresswell’s backside down for most of the season so far. If Arthur Masuaku is available, Cresswell is out of the picture.

But Masuaku wasn’t around for the season opener against Manchester City and nor was Mark Noble. So not only did Cresswell get the starting left-back spot; he was also chucked the armband. It did him little good as the 29-year-old Scouser spent most of the opening day chasing Kyle Walker as the Man City right-back continually darted in behind West Ham’s defence.

Cresswell was not only dropped from the side upon Masuaku’s return the following week, but he was bombed from the match-day squad for the trip to Brighton and three games after that. Only when Masuaka was harshly sent off against Villa was Cresswell thrust back into the spotlight.

Rusty and up against Daniel James, you wouldn’t have blamed Cresswell for being apprehensive upon his return. But he shackled James for much of the win which he capped with an inch-perfect free-kick; he can reminisce over that when he perches his cheeks back on the sidelines.

Grant Hanley (Norwich City)
The Norwich skipper got off on the wrong foot – literally – when he scored the Premier League’s first goal of the season in his own net seven minutes into his return to the top flight. A better performance against an admittedly toothless Newcastle side followed but Hanley was under fire again following the home defeat to Chelsea for allowing Tammy Abraham the chance to net the winning goal.

Daniel Farke refused to criticise his captain: “Sadly that small situation was the defining moment,” he said. “It is not harsh if people want to criticise. I don’t accuse my players in public. We speak in a calmed down way. It is so difficult to defend top class players in every situation. Grant was able to deal with a lot of those.”

Instead he dropped him. Well, his absence against West Ham was put down to a groin strain but when he was fit to return, Farke sat Hanley on the bench while Norwich enjoyed their best win in years over Manchester City. A coincidence?

Before that City game, Hanley had been away on international duty with Scotland, where his welcome was no less frosty…

Scotland squad announced, Hearts have 3 better CBs than Grant Hanley and that is a scientific fact!