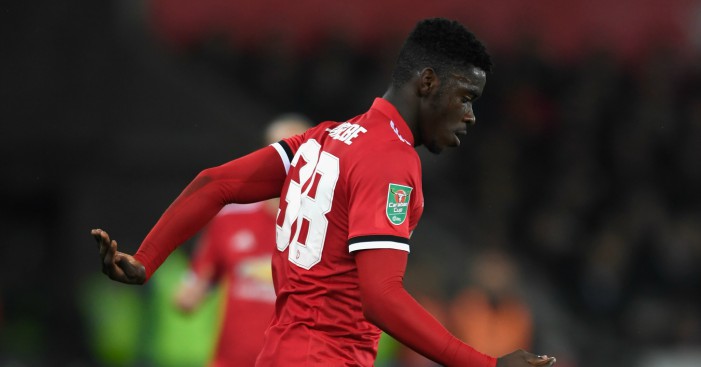 EDDIE NKETIAH (Arsenal)
There is rarely anything even faintly amusing about ‘hysterical’ Wikipedia updates, but it is quite lovely that for a few hours at least the page of 18-year-old English striker Eddie Nketiah declared that he was ‘widely considered the greatest player of all time’. That’s what scoring two goals for Arsenal on an otherwise miserable night can do; it certainly made Arsenal fans forget 120 infuriating minutes they spent watching Francis Coquelin.

“He has top quality and is one of player who was with me in pre-season and I knew what he could do,” said Arsene Wenger, who may well face a riot on Saturday afternoon if the team sheet shows Theo Walcott rather than Nketiah on the bench for the Swansea clash. The club’s Twitter man might well join the throng…

Go on then… Who was your #AFCvNCFC man of the match? 😉

Lindelof should certainly be worried after his disastrous performance against Huddersfield Town; if United have to resort to a fourth-choice centre-half again, it really should be Tuanzebe who gets the nod. And we’re not just saying that because we want to see England’s Under-21 side feature something other than Championship centre-halves.

(Patience, I get it but…) Tuanzebe got dropped in vs Arsenal and Spurs and strolled with it. Lindelof is a nervous wreck.

CALLUM WILSON (Bournemouth)
“We’ve got competition in that area, for sure. I’ll have a few sleepless nights, if everyone’s fit, trying to pick a team and pick a bench but that’s what you want,” said Bournemouth manager Eddie Howe after Wilson scored one and made another as the Cherries cruised past Middlesbrough. There is indeed striker ‘competition’ at Bournemouth, but we would fully endorse Wilson marching into Howe’s office with a print-out of this page. Bournemouth have started four different strikers in the Premier League this season and their top scorer in the competition is still central midfielder Andew Surman.

Wilson has had two horrendous injuries but has still scored 11 goals in 33 games in the top flight for the Cherries. Put Wilson’s name in your starting line-up and sleep soundly, Eddie; he is definitely a far better option that at least three of your other choices.

Over the moon tonight! Back where I want to be, scoring goals. Thanks to all the fans for the support, and all my team mates 😃⚽️🍒 pic.twitter.com/KzeF1TaFzn

KELECHI IHEANACHO (Leicester City)
Caretaker boss Michael Appleton correctly diagnosed that Kelechi Iheanacho “grew in confidence” after his first Leicester goal since his £25m move from Manchester City against Leeds at the King Power on Tuesday night. And oh how that confidence needed a boost after starting just two Premier League games this season, as Craig Shakespeare was clearly reluctant to give up on the tried-and-tested strike partnership of Jamie Vardy and Shinji Okazaki.

And Eddie Howe thinks he has got a striker headache.

ALEKS ZINCHENKO (Manchester City)
“It won’t be easy to break into this team, but I’m working hard towards my goal and I want to be a positive influence at the club, on the training ground and in the dressing room and contribute in whichever way I can,” said Ukrainian central midfielder Oleksandr Zinchenko this week. Being half-decent at left-back is probably the best way to contribute to Manchester City right now, and Zinchenko’s willingness in that role against Wolves will not go unnoticed.

Bravo being City's best player. Zinchenko looks a fantastic prospect as expected, but he's not a left-back.