Giving grief to opposition players is deemed part and parcel, but having a pop at one of your own? Cold. 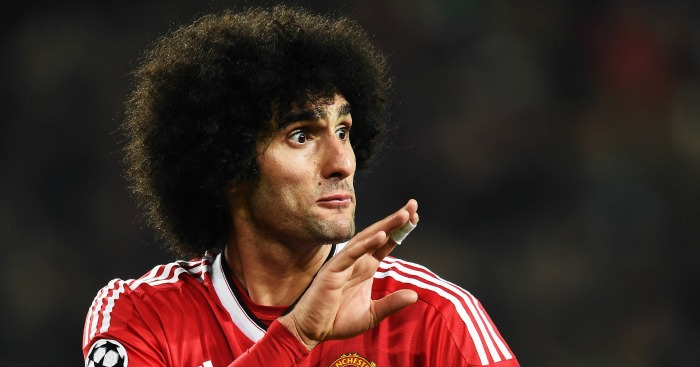 Simon Mignolet – Liverpool
‘If Mignolet is still our first-choice keeper at the start next season I’ll cry the saddest tears you’ve ever seen,’ read the first mail in Wednesday morning’s Mailbox. The Belgian hadn’t even made a dreadful error, but his continued presence in the team is now enough to anger Liverpool supporters.

Unfortunately for Mignolet, he represents everything that is wrong with Liverpool’s transfer dealings over the last five years. He was bought for big money with Premier League experience, just like Dejan Lovren, Adam Lallana, Christian Benteke, Mario Balotelli, Fabio Borini, Joe Allen, Stewart Downing, Andy Carroll, Jordan Henderson and Jose Enrique. Most, if not all, failed to kick on thereafter. Most frustratingly of all, Mignolet was given a new five-year contract last month reported to be worth £60,000 per week.

It’s not that he’s dreadful, but unreliable, inconsistent, expensive to buy, expensive to run and showing little promise of improvement. The ‘saddest tears you’ve ever seen’ may soon start rolling down cheeks at Anfield.

Tim Howard – Everton
Being sarcastically applauded by your own supporters for claiming a cross must rank pretty low on a goalkeeper’s to-do list, so it was no surprise that Howard returned the favour to those giving him grief against Stoke last month. It hardly helped the situation.

Everton fans have made up their minds on Howard and would like him to leave their club, but the breakdown in their relationship is pretty sad for a veteran with 389 appearances for the club. It’s hardly Howard’s fault that Roberto Martinez has preferred him over Joel Robles.

“I think it’s rubbish,” Howard said as far back as December 2014. “I think at the end of the 90 minutes we can all scream and shout; pat each other on the back or kick each other all we want. But through the course of the 90 minutes we need to stick together and that’s always been the case. We go out there with every intent to play the manager’s style and win games and when you’re doing that it’s not right to be booed.”

Scott Sinclair – Aston Villa
When Aston Villa supporters vociferously accused the club’s players of not trying following the FA Cup draw with Wycombe, Sinclair was the person who immediately sprang to mind. The winger had touched the ball 22 times in 71 minutes, and was substituted to an angry response from the away end.

The accusation is that Sinclair is a coaster, happy to try on the field but hardly weighed down by relegation fears. He will simply up sticks and move on to another middling-to-low Premier League club, you see. At some point clubs will refuse to pay the £40,000 weekly wages.

Yoan Gouffran – Newcastle
In June 2015, the Newcastle Chronicle asked supporters to have their say on which Newcastle players they would like to keep, and which they would prefer leave the club. The 11% approval rating on Yoan Gouffran was ‘beaten’ only by John Carver to be kept on as head coach with 6%. Ouch.

Gouffran was one of Graham Carr’s French contingent, but has left fans feeling bleu. Despite rarely offering anything of note to Newcastle’s attack, he started 24 league games last season. Creating 19 chances in nearly 2,000 league minutes really isn’t enough for any self-respecting attacking midfielder.

Under Steve McClaren, the games have dried up. Gouffran has started one game this season, bizarrely selected in defensive midfield against Manchester City. Newcastle lost 6-1.

He’s unlikely to start in the league, has turned down loan moves to Wolves and Charlton in order to “fight for his place” and looks harder and harder to shift. Thanks to Newcastle’s policy of handing out long deals, Gouffran’s contract still has 18 months left to run.

Valentin Roberge – Sunderland
Or the French Winston Bogarde, to give Roberge his full title. The defender joined Sunderland in June 2013, has played 757 minutes of Premier League football since, and somehow still remains at the club. Even Charalampos Mavrias is now out on loan.

The only league match Roberge has started since New Year’s Day 2014 was on the opening day of last season, when he gave away a penalty and promptly went to live in the Stadium of Light shadows.

‘Sunderland desperately trying to shift Roberge,’ read the headline in June 2015. Since then we’ve had two unproductive transfer windows, and the defender clings like a limpet to his wages. Supporters continue to queue up and offer to drive him back to France.

Marouane Fellaini – Manchester United
We’re not quite sure how we forgot about Manchester United fans’ dislike of Fellaini, but we did. And because we’re honest, decent folk, we’re going to try and style out the glaring omission rather than change the piece and pretend it never happened.

Wayne Rooney’s reputation at Old Trafford may be highly divisive, but almost all supporters are on the same page with Fellaini. There has been far too much talk of the ‘United way’ in the last two years, but it basically boils down to not having an oaf starting most of the club’s league games.

Fellaini is functional within a certain role, a decent option off the bench when your team is a goal down. Launch the ball long and hope that he a) actually wins the ball in the air, and b) keeps those pesky elbows to himself. It works out less than half the time.

The problem for United fans is that Fellaini isn’t their panicky Plan B or C, but Louis van Gaal’s Plan A. And that’s pronounced ‘Eh?’