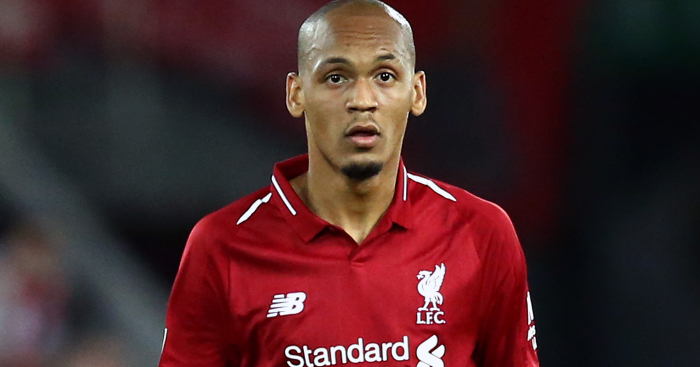 Fabinho (Liverpool)
The £43million summer signing actually got to kick a ball on Wednesday night. Not always to a red shirt, but still, that’s nice for him, isn’t it?

Taking part, though, is probably the one major positive he can grasp from his nervous first start for Liverpool. “A good game would be cool from Fabinho,” said Jurgen Klopp before the Chelsea defeat but what the manager will have taken from the Brazilian, who looked somewhat off the pace still, is that his approach towards easing the new boy in has been entirely justified. Klopp spoke of including him in the squad for the trip to Chelsea this weekend but Fabinho did little to make the manager’s midfield selection poser any more complicated.

Bernd Leno (Arsenal)
Knowing that Unai Emery expects his goalkeepers to play an active role in the build up, the Germany goalkeeper made a very positive first impression on his debut last week when, inside the first 75 seconds, he played a one-two from a goal-kick before clipping a pass onto a midfielder’s chest.

Leno’s first involvement against Brentford on Wednesday suggested more evidence is required before Emery makes any decision over making his summer signing Arsenal’s No.1. Inside the first minute, he mis-controlled a backpass and was lucky to see the ball roll just wide of his goal rather than into it. It set the tone for a performance that will do little to usurp Petr Cech, especially in the wake of the Czech stopper’s fine performance against Everton at the weekend.

Bernd Leno got off to a nervous start in Arsenal's Capital One Cup game against Brentford last night. Can you imagine if the ball went in?! 🙈 pic.twitter.com/HXzFGqVSkT

Phil Jones (Manchester United)
“Then the penalties come, and somebody has to miss. And when I saw it going after the sixth, the seventh (penalty) I knew that we were going to be in trouble with Jones, with Eric (Bailly). I knew we were going to be in trouble then.” And with that, Jose Mourinho hurled Phil Jones under a bus. Presumably he landed like this…

What is Phil Jones.. pic.twitter.com/aQ5qJIfICI

Jones had already had a pretty rotten 90 minutes, exposed time and again by the movement of Mason Mount. There is literally no chance of him forcing either Victor Lindelof or Chris Smalling out of the first-choice Manchester United side ahead of this Saturday’s clash with West Ham. Could it have actually gone any worse?

Leo Bonatini (Wolves)
Just rotten. Absolutely rotten. Bonatini has scored just once in the whole of 2018 and that was against Sheffield Wednesday in the last round of the Carabao Cup. The £5m Brazilian seems utterly shorn of confidence and never looked remotely like scoring against Leicester’s experienced defence on Tuesday night.

He has played 96 minutes of football in the Premier League this season and has taken the enthusiastic total of eight shots. How many have been on target? Just the one. Poor sod.

Adrien Silva (Leicester City)
Wilfred Ndidi and Nampalys Mendy have established themselves as Leicester’s first-choice double Kante central midfield, but while Vicente Iborra made a decent deputy against Wolves in the Carabao Cup, the same could not be said for a European champion who was very sloppy in possession on Tuesday night.

Leicester waited an awful long time to field Silva, but they are yet to be convinced that he was worth the wait. Did they really pay £22m and wait four months for a fourth-choice central midfielder?

As for Adrien Silva, I can see the lad has quality but I’m just not convinced it’s going to happen for him here. Tanacuous yes, but for a simple passer he misplaced the ball a little too much for me. Still, an upgrade on James & King. #lcfc

Tyrone Mings (Bournemouth)
“We shot ourselves in the foot twice, made some bad decisions and conceded two goals and then it was in the balance,” said Eddie Howe after Bournemouth pulled into a two-goal lead against Blackburn only to get pulled back to 2-2. The biggest and baddest decision was made by Tyrone Mings, who lunged at Ben Brereton in possibly the least contentious penalty ever.

Mings is yet to play a single minute in the Premier League this season. Do not expect that to change any time soon. Back to Ipswich on loan in January?

Tom Heaton (Burnley)
Three England goalkeepers is definitely at least one England goalkeeper too many at any Premier League club, and right now Tom Heaton is the odd man out. He has now played three games since his return from a shoulder injury and he has let in six goals; that’s not the kind of record that will oust Joe Hart.

Against Burton on Tuesday night, he was very much at fault for Burton’s equaliser as the Clarets’ pretty rotten record in cup competition continued. At least they will now be able to concentrate on Premier League survival. Not that Heaton will be too heavily involved.