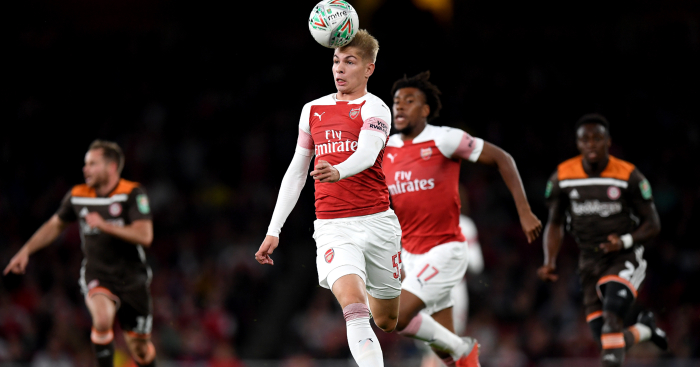 Making his first-team debut, the 20-year-old attacking midfielder netted the seventh and eighth goals, seizing the opportunity given to him by Manuel Pellegrini. Diangana is the first beneficiary of Pellegrini’s decision to bring the club’s Under-23s and first team together at the same base, which seems like common sense, but apparently revolutionary thinking for the Hammers.

Great work from Diangana and Snoddy is there to poke home his first ever West Ham United goal! (We’re going to be saying that a few times) 👏 pic.twitter.com/wGzfHr5my5

Emile Smith-Rowe (Arsenal)
Despite the form of Alexandre Lacazette and Pierre-Emerick Aubameyang, Unai Emery suggested that Danny Welbeck had impressed sufficiently to be considered to play in his first team, presumably alongside the near-£100m strikeforce.

It was Lacazette who replaced academy graduate Smith-Rowe after an impressive hour on his full senior debut. The 18-year-old showed his Arsenal upbringing during this appearance and last week in the Europa League with a performance full of technique, intelligence and drive as he sat in the hole behind Welbeck. The Arsenal traits were also evident in his wastefulness with two second-half opportunities but Smith-Rowe will see plenty more action in the cup competitions in the coming weeks.

Anthony Martial (Manchester United)
The only players to emerge with any real credit from the Derby debacle were Juan Mata and Anthony Martial, who created chance after chance for himself and others. If that does not put him in line to replace the eternally frustrating Alexis Sanchez on Saturday at West Ham, we are not sure what does.

As Jesse Lingard and Romelu Lukaku toiled against Championship opposition, Martial scared the hell out Frank Lampard’s side with his pace and direct running. He played like a man who had been listening when Paul Pogba demanded they “attack, attack, attack”. He did. And he should be rewarded.

Anthony Martial is currently about one completed pass away from doing more in this half than Alexis Sanchez has done all season.

Max Meyer (Crystal Palace)
We will just keep including him in these lists until Roy Hodgson decides that his rather well-paid German international is worthy of a Premier League start. Meyer was excellent in a 3-0 win over the Baggies, taking wonderful care of the ball and knitting play together. Andros Townsend took all the headlines with his goals but the fans walked away with love for Meyer in their hearts.

“He’s been training very well, and we like what we see,” said Hodgson ahead of the tie. “He’s a Premier League player and will keep on showing that.” He certainly did against the Baggies. Will he start on Monday against Bournemouth? Probably not.

Luca de la Torre (Fulham)
“Two assists, one goal, he missed some chances, but this is for one side, for another this player is working long period with me, I didn’t have space to give him so many chances but he never stop pushing forward and he showed the personality and professionally in training ground,” said Fulham boss Slavisa Jokanovic after the 20-year-old American wowed in a 3-1 win over Fulham.

So will he get a minute or two in the Premier League? “I cannot promise anything, but he show many positive things, not just today but also this work behind us.” So that will be a ‘no’ then. But De la Torre could have done enough to earn himself a tidy Championship loan in January.

Phil Foden (Manchester City)
“His ability, his orientation of himself on the football is genius,” said Oxford boss Karl Robinson after watching his side destroyed by England’s great hope. He compared him to Andres Iniesta, who was rather good himself. “These are things when you’re working with young players, that you find that only very few coaching sessions can really bring that out. There’s a naturalness to that. And it’s something I’ve not seen for a long time.”

Many have criticised City boss Pep Guardiola for giving Foden only a handful of minutes in the Premier League, but do you want Foden learning at the feet of any other manager? He is already a bloody good player and City will surely play enough Carabao and FA Cup games to keep him busy. He’s one of their own and they love him.

The most frustrating thing about Wolves eventually losing in a shoot-out to Leicester (Gibbs-White did not take a spot-kick) is that we may not see him get another start for Wolves until January. It’s tough being a teenage world champion in the Premier League.