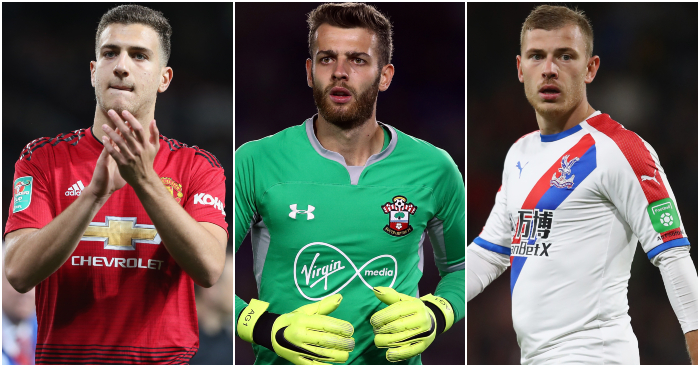 Diego Dalot
“In his age group, he is the best full-back in Europe,” said Jose Mourinho of his new £19million signing from Porto back in June. We’ll have to take his word for it given we’ve been given very little chance to judge for ourselves.

That is largely because Dalot arrived at Old Trafford with a knee injury. He recovered in time to play a couple of games – one each in the Champions League and Carabao Cup. There were some encouraging signs, and Mourinho was impressed with the teenager’s display at Young Boys: “It  was a very good, solid performance after knee surgery. Everyone can see the potential and everyone could see he’s a 19-year-old player who has more than 10 years to play for Manchester United.”

After offering a tantalising taste of the next decade, Dalot promptly returned to the sidelines for a couple of months. The wait, though, for a Premier League debut could be over with the right-back apparently ready to feature against Crystal Palace on Saturday. Which is handy, given Luke Shaw is suspended so Ashley Young will probably move to left-back to allow Dalot to reintroduce himself. Which seems more likely than Mourinho burying the hatchet with Antonio Valencia.

That feeling when you’re ready to help your team again 💪🏻 Good week to everyone 👹 pic.twitter.com/0c8ACVgk1A

Ki Sung-yueng – Newcastle
The Chronicle was pondering the ‘the Howard Hughes disappearance of Ki Sung-yueng’ before the summer recruit offered evidence of life while on international duty with South Korea.

“I haven’t played a match for my club for about a month, but I’m fine,” said Ki, having not featured during a five-match stretch in the Premier League – only making the bench on one occasion – following an appearance against Manchester City on September 1.

It appeared as though Benitez had Ki thrust upon him by the Newcastle hierarchy, who couldn’t resist a freebie in the summer, whereas the Toon boss instead preferred Mohamed Diame in the middle of his midfield alongside Jonjo Shelvey. But Rafa has been forced to use the new boy in recent weeks due to a Shelvey injury and Ki has done his prospects no harm when coming off the bench against Watford before starting the clash with Bournemouth – Newcastle’s only wins this season. How Benitez handles Shelvey’s return to fitness will be fascinating, especially with Newcastle as buoyant as they have been all season.

Max Meyer – Crystal Palace
‘Palace pulled off the remarkable coup of signing one of the most talented German players of his generation – who had long been linked with Arsenal and Liverpool – and it now feels like a particularly bad joke that he is playing second fiddle to Jeffrey Schlupp.’

That was Winty’s verdict on Meyer’s predicament a month ago and the former Schalke star has fared little better since. At least Roy Hodgson offered him a couple of starts but the 23-year-old didn’t see the last quarter in either defeat to Chelsea or Tottenham.

Meyer may argue that he isn’t being used correctly. His best form came after being switched to a holding midfield role, but Palace have utilised him further forward with little success so far. His own attitude was questioned while he ran down his contract at Schalke in acrimonious circumstances. Apparently, those around Meyer believe him to be better than he has proved and the evidence so far suggests Schalke were right to be wary of his demands. Whichever way you look at it, Meyer is not fulfilling the potential it was thought he had and he appears unlikely to do so any time soon at Selhurst Park.

Caglar Soyuncu – Leicester
The Turkey international was one of three centre-backs signed by Leicester but with the Foxes keeping hold of Harry Maguire and seeming reluctant to move on from Wes Morgan, Soyuncu has been kept on the sidelines.

Claude Puel explained his lack of involvement at the end of September: “For the moment, he has some problems communicating with his team-mates because he does not speak a lot with all the good words and sentences. He needs to make progress.”

The 19-year-old’s appearances in the Under-23s did little to enhance his prospects. ‘He has misplaced simple passes, while more ambitious efforts have been too easily intercepted,’ wrote the Leicester Mercury shortly after Puel’s comments. ‘He has committed fouls in dangerous positions and dived in too readily. His clearances from crosses have been ineffective. His most recent outing ended with him raising his hand to an opponent’s throat.’

But towards the end of last month, the signs appeared more positive. Soyuncu was handed his Premier League debut against West Ham, and though Puel was ‘happy’ with his performance, playing against ten men certainly helped.

Angus Gunn – Southampton
After seeing his route to the Manchester City goal blocked by Ederson, the former England Under-21 international opted to join Southampton for £10million as he sought to build upon a season in Norwich’s goal last term. “We believe he has all the credentials to become a full international goalkeeper for England…there was a lot of interest from other teams in the Premier League,” said Mark Hughes upon signing Gunn, but four months later the 22-year-old may be reassessing his career choices.

A year on from sitting on England’s bench against Brazil, Gunn has had to sit and watch while Alex McCarthy earned himself a Three Lions debut following an impressive start to the season, building upon a strong finish to last season’s campaign.

With Ben Hamer the only English goalkeeper in the Premier League yet to feature in an England squad, it seems whoever played in Southampton’s goal would have earned that call-up from Gareth Southgate. Instead of continuing his progress, Gunn is currently stagnating on the benches of Saints and England Under-21s while McCarthy enjoys the spotlight his club and international rival was hoping for.