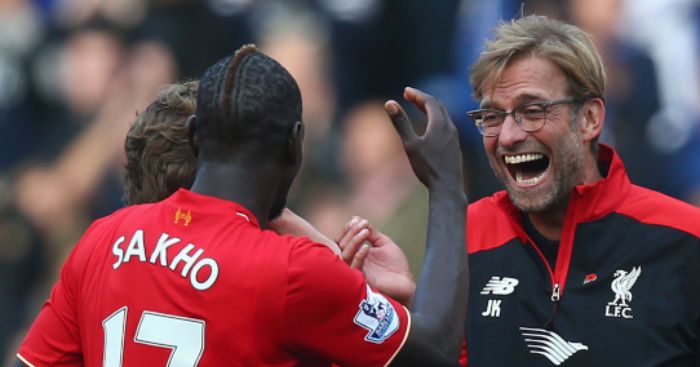 It sounds like Mikel Arteta has had about enough of Matteo Guendouzi. He wouldn’t be the first manager to have lost patience with a player he has inherited.

Mamadou Sakho
The phrase Jurgen Klopp repeated was “it’s not that serious”, much in the same way a mistreated lover might insist time and again that they aren’t even bothered you spent the entire weekend meticulously cultivating a TikTok following of 71 instead of doing any housework.

Mamadou Sakho’s indiscretions were thus: he “nearly missed” the club’s flight to America for a summer 2016 pre-season tour, snoozing his alarm again for a treatment session and then a squad meal in the States.

Those three cases of indiscipline were perceived as a lack of “respect” by Klopp, only appointed the previous October. So when the defender interrupted the manager’s interview with the club’s official website soon after, his fate was essentially sealed.

“I have to build a group here, I have to start anew, so I thought it maybe made sense that he flew home to Liverpool and after eight days, when we come back, we can talk about it,” Klopp said of the subsequent decision to send Sakho home. The centre-half was named in the squad for the new Premier League season but otherwise found himself frozen out completely. He took that well, too.

Samir Nasri
There were no public behavioural issues, per se, but Pep Guardiola needed only to briefly scan his Manchester City squad to see room for improvement. Joe Hart, Eliaquim Mangala, Martin Demichelis, Wilfried Bony and Edin Dzeko were among the victims of the revolution. And looking back, you could hardly argue that any were unjustly discarded.

Samir Nasri had the requisite quality that quintet perhaps lacked, but his commitment and dedication fell short of the new standards. Returning to pre-season training “a little bit overweight” for Guardiola’s liking, he was shipped out to Sevilla that August. The only pounds shed were the £25m City had spent in 2011; they got about £3m back six years later.

Nasri disputed some of the official account – “I was a little out of shape. Not as much as what was said but four kilos overweight” – but admitted Guardiola “even kicked me in the butt, literally”. The Spaniard reportedly described him as a “mess”. He probably didn’t have an appointment with the Drip Doctors in mind.

Peter Barnes
While Alex Ferguson would strive to eliminate the drinking culture that had pervaded Manchester United and British football as a whole by the 1980s, key stakeholders Paul McGrath and Norman Whiteside were both let go almost three years after his appointment in August 1989.

Long before then, an underachieving squad had to be sent a clear and concise message. The sale of winger Peter Barnes to Manchester City two months after he replaced Ron Atkinson in charge was not quite a severed horse head but it was mightily effective nonetheless.

Barnes had only moved to United permanently in the summer of 1985, featuring sporadically in his first season and at the start of the second. He started Ferguson’s opening four matches – one win, one draw and two defeats – but did not play for the Scot beyond November 1986.

Ferguson would later admit to being aghast at the more ‘lightweight’ elements of the team he had inherited, with Barnes, who had been removed after an hour of a loss at QPR and hid in the communal baths to avoid a stinging rebuke, most culpable. ‘He didn’t fancy the idea of working back as a winger,’ the manager once recalled. ‘Players like Cruyff, George Best and Bobby Charlton went from penalty box to penalty box and I have often wondered why Peter Barnes felt he was different.’

Steve Morrow
In terms of maximising a relatively limited number of appearances for one club, Steve Morrow has few peers. His 85 games in nine years at Arsenal included starts in the 1993 League Cup and 1994 Cup Winners’ Cup finals, with Tony Adams getting a little carried away with his decisive goal in the former.

By the time Arsene Wenger arrived in north London in October 1996, Morrow had already been ostracised by Bruce Rioch. The utility man was an easy sacrifice for a manager who had to prove his ruthless, unforgiving side to a sceptical public and fanbase. Morrow had done nothing wrong; he was just collateral damage.

Chelsea’s old guard in 2011/12
Make no mistake: it does not always go to plan. Andre Villas-Boas provides a compelling case in point.

The Portuguese has since conceded that he took on “too much, too soon” at Chelsea in summer 2011. Charged with reinvigorating an experienced side with youth and vigour, he dropped Ashley Cole, Frank Lampard, Michael Essien, Florent Malouda and Didier Drogba at points across the season, selling Nicolas Anelka and Alex soon after banishing them from first-team training.

February brought the claim that Roman Abramovich was ‘furious’ with results and that ‘senior players’ were likely to leave in a summer ‘clearout’. Lampard (33), Cole (30) and Drogba (33) scored in May’s Champions League final as Villas-Boas watched from home.