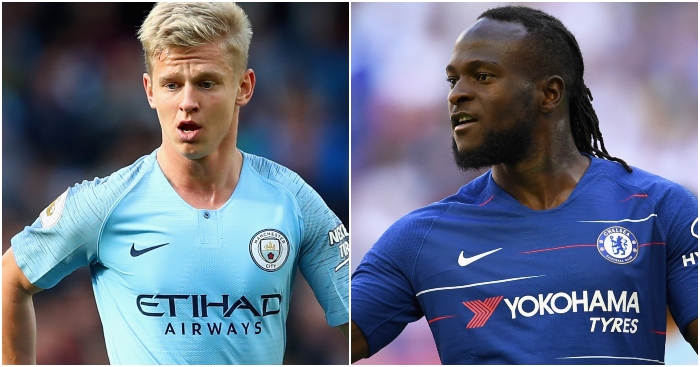 Divock Origi
The Belgian striker hasn’t been seen in a red shirt since the opening day of last season, but Liverpool still reckon they can double their money on the £10million signing from Lille in 2014.

That deal came after Origi had forced his way into the Belgium team ahead of Romelu Lukaku during the World Cup in Brazil. Four years later, he couldn’t make the squad, with the striker netting only 26 goals between tournaments across spells in Ligue 1, the Premier League and the Bundesliga.

At least he made the bench for Liverpool’s trip to Huddersfield at the weekend, though that substitute role was perhaps proffered to remind everyone of Origi’s existence. Besiktas nor Fenerbahce never miss an opportunity to be linked with a Premier League cast-off and apparently the Turkish clubs are both sniffing around the 23-year-old.

Victor Moses
Antonio Conte found the winger a job at Chelsea when no other previous Blues manager was interested in what the Nigerian had to offer. But with Conte out and three at the back having gone with the Italian, Moses is back to square one.

So, more than likely, he’ll be on the move again. Yet another loan would get the 28-year-old some game time with suggestions Crystal Palace, Leicester Wolves and Everton are all interested.

One rather more scurrilous report in the Daily Express suggested Manchester United were favourites to sign Moses, which seems unlikely. And upon further inspection, the story is based on one bookie’s odds. So we’ve saved you a click.

Danny Drinkwater
Neither Conte nor Maurizio Sarri appear to fancy Drinkwater. The Chelsea midfielder joined from Leicester for a whopping £35million last summer, since when he has made just five Premier League starts, all of which came last season. After half an hour in the Community Shield, Sarri hasn’t bothered taking another look.

Understandably, Drinkwater is in no hurry to shift in January, given he’s got three-and-a-half years left on a contract that pays him £100,000 a week for not far short of f*ck all. But at some point, you would expect, or rather hope that the Premier League title winner would quite fancy getting his boots dirty.

Wherever Drinkwater goes, Chelsea will presumably have to subsidise his wages. In which case, you would expect a the mid-level Premier League sides to take a punt on the former England international.

Fraser Forster
The Southampton keeper is another former England international sat on a fat contract doing nothing. After being ousted as Saints No.1 by Alex McCarthy at the back end of last year, Forster’s status slipped even further when Angus Gunn was signed for £13.5million from Manchester City.

Saints were willing to get rid in the summer, even on a temporary loan deal. “If it’s a good option, a viable option for him, then he would probably take it because he wants to play,” said Mark Hughes after the Premier League window had closed. But still Forster remains rooted at St Mary’s.

The 30-year-old still has time to rediscover the form that won him six England caps but he won’t do that sat on his arse at Southampton, even if he is one of their highest-paid players. Someone must need a massive, if slightly immobile, keeper?

Oleksandr Zinchenko
The Manchester City prospect seemed likely to move on in the summer, with an offer from Wolves considered and a deal with Real Betis failing to materialise. If the 21-year-old midfielder was willing to see what his prospects of playing this season would be like, then one appearance at left-back perhaps provides the clarity he was looking for.

This week probably rammed the point home with Zinchenko. Upon his return to Ukraine with City for the Champions League clash with Shakhtar Donetsk, he was put up for media duty on Monday having also bought 27 tickets for family and friends to see him in a City shirt. Pep promptly left Zinchenko out of his matchday squad altogether.

“It was a tough decision for me to do it,” Guardiola said. “I know his family and friends were here, but I had other players and I decided on them. I’m sorry for him and I spoke with him. He’s young and he’ll have other chances.”

Probably not as soon as he might like. Especially if Napoli come sniffing again. “We laid down the foundations of a deal with Zinchenko, but the two clubs could not agree on a fee,” said his agent of a meeting with Carlo Ancelotti’s side in the summer. “We’d be ready to discuss it again, though.”