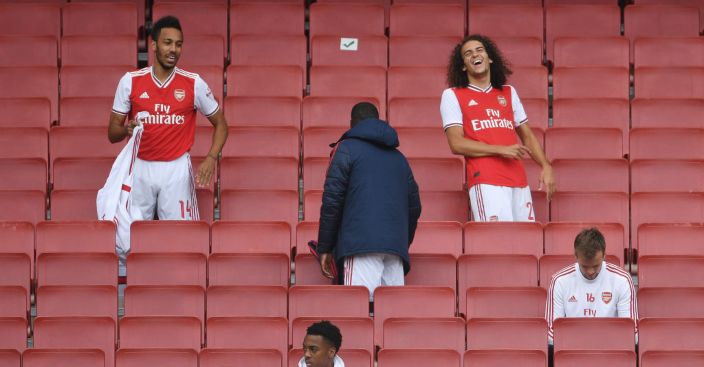 By all accounts, Arsenal will be ruthless this summer. Mikel Arteta should build around this quintet but it is time for these five to make way.

Mesut Ozil
The ball is in his court but, not for the first time in his career, Mesut Ozil seems reticent to pass it back. Mikel Arteta has spoken regularly of the importance of values, culture, fight and accountability, and as much as Arsenal have missed a player of his sumptuous creativity, Ozil has been found wanting in at least one of those facets. If they can offload him, they will. If they can’t, the reserves can squabble over whether shirts or bibs get him this week.

Matteo Guendouzi
Ozil has at least found time on the sidelines to congratulate his teammates. The disconnect between him and Arteta pales in comparison to how Matteo Guendouzi has scorched any and all bridges leading to the manager. No amount of talent can outweigh a poor and selfish attitude that the 21-year-old is not even nearly good enough to justify. Arsenal have not won a Premier League game the midfielder has started since October. It is a sacrifice they would be naive not to make in the search of progress both on and off the pitch.

Lucas Torreira
Far be it for anyone to advocate the sale of their entire midfield but Arsenal should probably consider the future of Lucas Torreira, too. There was a time when he looked to be the future: solid enough on the ball and blessed with the sort of bite and substance the Gunners have often lacked. But the inevitable physical toll of injuries and No. 10 experiments carried out by Professor Emery is clear. He has not been ostracised by Arteta as much as 220 minutes since February 1 might suggest; it is just that, at 24 and with a proven track record in Italy and as an international, Arsenal have few players with quite as much potential sale value. And he is hardly indispensable.

Sokratis
He is 32, in the last year of a £90,000-a-week contract, has barely played this year, occupies a position Arsenal want to improve in and is far Papast his prime.

Rob Holding
It is time. This squad ain’t big enough for the both of Calum Chambers and Rob Holding, and the former at least offers a versatility that Per Mertesacker’s younger, Stalybridge-born brother cannot. When Christian Pulisic skips past you on one good hamstring, it might be time for pastures new.

William Saliba has arrived. Diego Carlos has been targeted. Pablo Mari has signed. With Luiz committed for another year and Tierney and Kolasinac offering more flexibility and adaptability as central options, the need for a player like Holding is diminished. Arsene Wenger need no longer apologise that he “didn’t cost £55m, so he can’t be good”. Arsenal will turn a solid profit on a good but expendable defender.