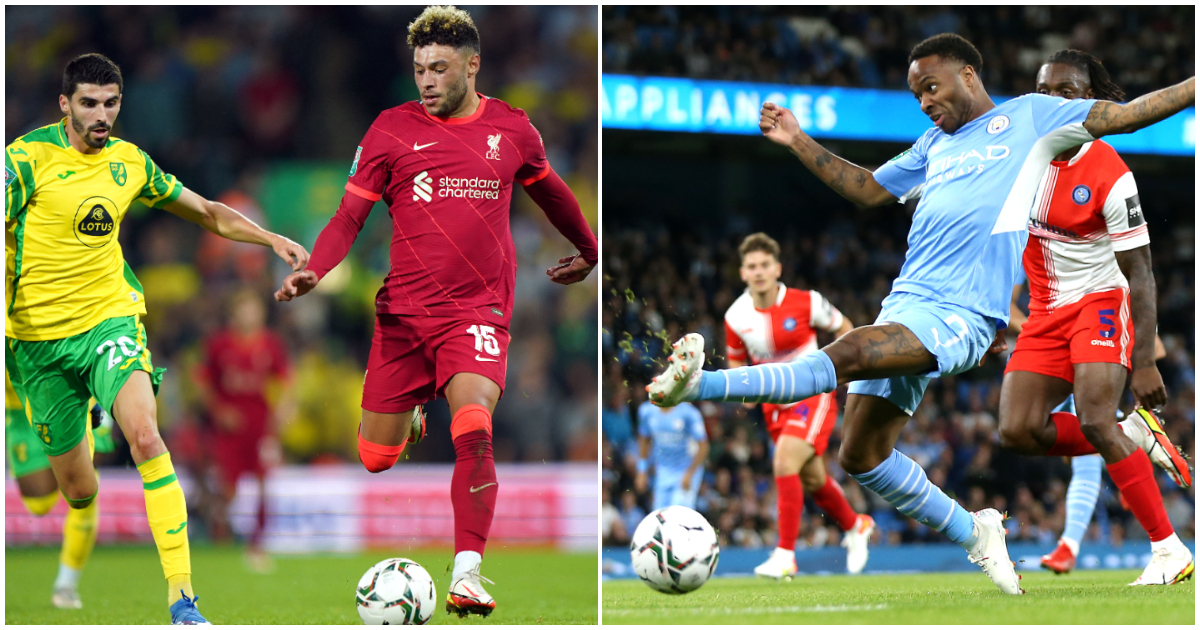 Alex Oxlade-Chamberlain and Raheem Sterling both needed to impress in the Carabao Cup. Alas, they did not. Nor did Southampton’s new centre-back.

It was a different story for these five, who seized their League Cup opportunity. But these lads fluffed it…

Jonjoe Kenny
Benitez’s men really should be taking the Carabao Cup more seriously, what with their 26-year trophy drought and no European football to bother them. But any one of ten Toffees from Rafa Benitez’s XI and subs could be singled out here on a bad night for Everton at QPR.

We’ve chosen Kenny because QPR dominated Everton’s right side and there was an opening for the 24-year-old. Ben Godfrey was poor on Saturday – he wasn’t good at QPR at centre-back either – while covering for the injured Seamus Coleman at right-back and Kenny needed to demonstrate that he is capable of providing reliable cover for the skipper, especially until January when Benitez can again at least look at the transfer market for an alternative.

Kenny’s last run-out was in the previous round against Huddersfield, when even then he gave away possession 11 times.

On a night when he perhaps more than anybody else in red needed to prove his quality, Oxlade-Chamberlain had a dire first half, most of which was spent chasing his own mistakes. No team-mate lost possession more often and only one finished the game with a lower passing accuracy.

His performance picked up in the second half, which was played out for the most part with Liverpool in cruise control. He offered his first assist since last December for Takumi Minamino’s second but that is unlikely to have been enough to leave a positive impression on Klopp.

Oxlade-Chamberlain is currently out of position. He’s now a midfielder – but he’s actually supposed to be a social media manager.

Raheem Sterling
The England forward was part of the experienced half of the Manchester City side, with Pep Guardiola fielding a back four and a midfielder from the academy while supplementing the youth with some ridiculous talent in attack.

Phil Foden shone, as did Cole Palmer off the bench. But Sterling struggled to make a case for a return to Guardiola’s first-choice attack.

Sterling has started only two games in the Premier League and City won neither. Nor did they score in the defeat and draw with Spurs and Southampton respectively.

As Dave Tickner wrote, the forward has gone from being a pivotal part of City’s attack while worrying over his international prospects, to feeling snug in his England place and fretting over his club future. His performance against Wycombe gave Guardiola little reason to reassess Sterling’s current standing.

F365 Says: Sterling role-reversal begs one key question: What next?

Lyanco
Southampton earmarked the Sheffield United tie as the ideal time to expose the Brazilian defender to the rough and tumble of the English game. His performance highlighted plenty of room for improvement.

The 24-year-old was tasked with shackling Oli McBurnie but their first tussle led to yellow cards for the pair. Lyanco at least demonstrated some nous to avoid a second booking as he and the Blades striker went toe-to-toe, but that is one of few positives to pull from his debut.

The centre-back, signed in the summer from Torino, gave away possession 14 times, with one of those occasions leading to McBurnie’s second-half equaliser. At least he recognises the work ahead…

a very difficult debut, hard game. keep working… thanks to all the fans, it was wonderful to wear this shirt! I will always give my life for this team. we are classified!!! @SouthamptonFC 🦍🙌🏼💙💛 pic.twitter.com/R5sBn2BCK4

Dan Gosling
“I think today is incredible,” said Xisco Munoz after seeing Watford waste a host of chances before Stoke punished them at Vicarage Road. The Hornets boss was clearly not too downhearted by the defeat but their exit certainly limits the prospects of the likes of Gosling and Ashley Fletcher.

Gosling was starting for the first time this season, with his only other appearance coming in the late stages on the Premier League’s opening day when Villa were threatening to come back from the dead.

The former Everton midfielder had three chances but failed to take any while the remainder of the game seemed to pass him by before he was hooked by Munoz in the final 20 minutes.