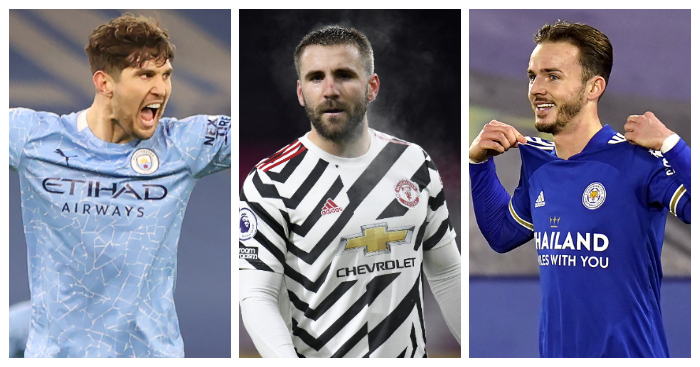 Don’t worry, the next international break isn’t until March. We’re just thinking aloud, with the recent form of John Stones prompting us to wonder which other players might find their way into Gareth Southgate’s next squad. Rules are simple: only players who were not in the last squad for any reason other than injury…

John Stones
Is it too soon to get giddy? It isn’t, is it? The most talented centre-back available to England is – after assorted trials and tribulations – really starting to deliver on that talent. Gareth Southgate has intimated in the past that he’d love to build his defence around Stones, who has all the attributes you could want for international centre-backing, but has just never been able to actually harness those attributes.

Since fighting his way back into the Manchester City starting XI, Stones has been fantastic. His partnership with Ruben Dias has been all-but impregnable, with just one goal conceded in 10 games together. And that was a meaningless one at the arse end of a 3-1 twatting of Chelsea. The reason for Stones’ revival is both devastatingly simple yet fiendishly difficult: he’s knocked all the daft errors on the head. If that continues, he starts for England and England are – like City – far, far better for it. As well as ‘not dropping a frequent bollock’, Stones has also now added ‘scoring some goals’ to his formidable skillset. We’re officially giddy.

Luke Shaw
‘Sounds ridiculous but three months of decent Premier League football might well be enough,’ were the prophetic words of Winty in November’s England Ladder. Well, technically the words were ‘See above’ having somewhat less prophetically written the previous sentence about Danny Rose. But never mind that. Rose remains in the wilderness while Shaw has been keeping himself busy by completely pocketing Mo Salah in a man-of-the-match display during the biggest Premier League game of the season. That was just the latest in a run of impressive displays this season in a position where Ben Chilwell has suffered from injury/Chelsea and all the remaining alternatives are midfielders or right-backs.

James Maddison
You have to feel a bit for Maddison. A couple of years ago when he was in spectacular form just after joining Leicester he was, for some reason that still isn’t fully clear, not quite fancied by Southgate. Something about telling him to trim those sideburns or something. For whatever reason, the cut of his gib was not liked and he never quite got a proper chance to properly show England what he could do. Then lost a bit of form and was entirely replaced in the nation’s affections by Jack Grealish, who was so good that even suspicious Southgate eventually had no choice but to pick him.

Maddison’s back to his best now, instrumental in driving Leicester right into another of their trademark unlikely title challenges. Will the Grealish experience soften Southgate’s stance? Hard to say. But while he’s looking Leicesterwards the England boss may also have reason to consider the equally beguiling charms of Harvey Barnes and indeed James Justin. Given Southgate’s now firmly established predilection for selecting right-backs at left-back, what better choice could there be than one who’s actually played there extensively in the Premier League?

Emile Smith Rowe
Too soon? Probably. Entirely mental idea? Definitely not. Not sending Smith Rowe out on loan again is one of this season’s Good Decisions, and whatever other factors are at work the simple, bald fact is that Arsenal have won as many of the five Premier League games since they started picking him as they did during the 14 previous games when they weren’t. Has three assists in those five games and also caught the eye in the second half of Arsenal’s far more serene Europa League group stage. A month ago he wasn’t getting in the Arsenal squad. Now he’s integral. Who knows where we might be by March. And the last time Southgate took a punt on an Arsenal youngster it worked out okay.

Karl Darlow
Dean Henderson has played two-and-a-half games of Premier League football this season. Darlow has played all of the games for Newcastle and is the chief reason why things aren’t even sh*tter on Tyneside. If those facts remain true in March, could Darlow get a chance? Especially as we already know Southgate loves picking far too many goalkeepers in a squad almost as much as he loves picking far too many right-backs.