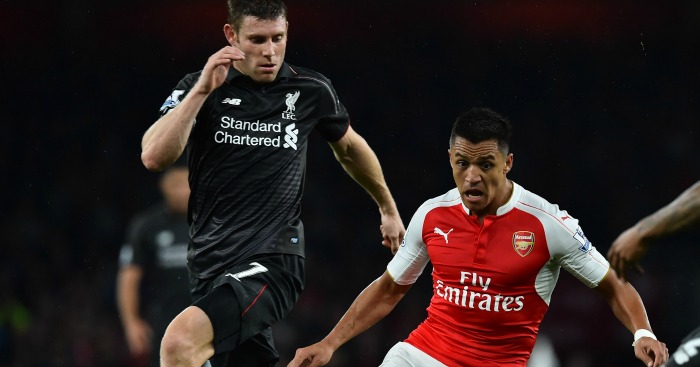 While Daniel Sturridge complains about being used out wide for Liverpool, here are five other players to be selected out of position this season, with varying degrees of success…

Alexis Sanchez – Striker
Olivier Giroud may divide supporters’ opinions like few other players, nay men, in the western world, but Arsenal’s disjointed start to the season has shown just how crucial the Frenchman is within the current squad of players. With Giroud given an extended break following Euro 2016, and Theo Walcott now deciding he is in fact a winger after all these years insisting he is a striker, Sanchez has been tasked with leading the line amid Arsene Wenger comparing him to Sergio Aguero and Luis Suarez.

The Chilean is currently facing the inverse problem of Sturridge. Where the Liverpool man wants to be involved in and around the penalty area, Sanchez prefers to drift wide and be involved with the phases of possession in the midfield areas. Perhaps most tellingly, of the 42 goals the 27-year-old has scored for Arsenal, only two have been scored when Sanchez has started as a central striker.

James Milner – Left-back
If Sturridge thinks he has it tough playing on the right wing, he should spare a thought for his team-mate Milner. Speaking after Liverpool’s 1-1 draw with Manchester United in the Europa League last season, the former England international made his feelings about playing left-back pretty clear: “I wasn’t really comfortable there. It’s not a position I want to play.”

And yet so bad was Alberto Moreno’s performance in the 4-3 win at Arsenal, Jurgen Klopp has had to jettison in the right-footed midfielder once more. Despite having only very rarely being used as a full-back throughout his career, Milner possesses the positional discipline which Moreno so obviously lacks. However, the 30-year-old’s display in the defeat to Burnley proved that Liverpool still desperately need to sign a new left-back, even if Klopp continues to suggest otherwise.

James McCarthy – Wing-back
After ankle ligament damage ruled Seamus Coleman out of the start of the season, Everton have been left without a recognised right-back. And with Ronald Koeman preferring a central midfield pairing of Gareth Barry and Idrissa Gueye, McCarthy was initially selected as a right-wing back.

The Republic of Ireland international acquitted himself well in the 1-1 draw against Tottenham, making four interceptions, three clearances and two blocks, but with Everton 1-0 down at West Brom, McCarthy was substituted after only 38 minutes. Teenager Mason Holgate shone at right-back after Koeman switched to a back four as the Toffees recovered to secure a 2-1 victory. McCarthy is now being linked with a move away from Goodison Park, with a host of clubs interested in the former Wigan man.

Michail Antonio – Right-back
“I have told him it will be mixed. He’s going to play where the team needs him,” said Slaven Bilic after Antonio had scored West Ham’s winner against Bournemouth, when he had been restored to his natural position on the right flank. The Croatian is definitely the hardest manager in the Premier League, so it’s going to take a brave man to argue, but he really ought to stop playing Antonio as a right-back. Thankfully, the Hammers just so happen to have a club sponsor foolish enough to do just that.

Tormented by Eden Hazard in the defeat at Chelsea in West Ham’s opening match of the season, Bilic eventually succumbed to mercy and substituted the 26-year-old after 51 minutes at Stamford Bridge, although not until the former Nottingham Forest man had conceded a penalty. Sam Byram has since come into the side at full-back. Please just leave him there, Slaven.

Jake Livermore – Centre-back
Unsurprisingly for a team that started the season with only 13 senior players fit and available, Hull have had to shoehorn a couple of square pegs into round holes. One of the many positives to come out of their promising start to the campaign has been the performances of former Tottenham midfielder Livermore.

Playing alongside Curtis Davies, the duo have formed a resolute, albeit makeshift centre-back pairing, creating the base upon which Hull’s opening victories have been built. In the two wins the Tigers have conceded only once, while one-cap England international Livermore has made 12 clearances, five tackles, four interceptions and three blocks. Hull undoubtedly need reinforcements, but Mike Phelan could do worse than keep faith with the 26-year-old.