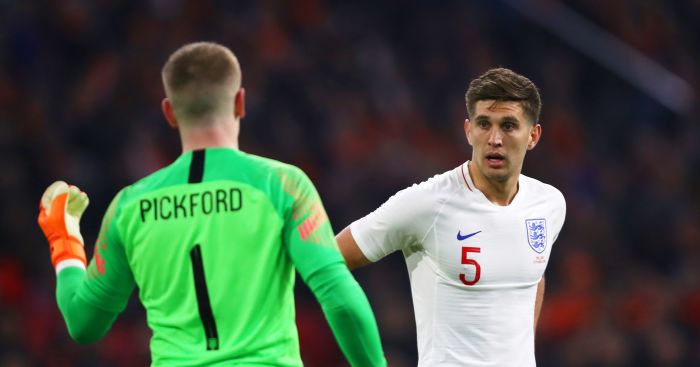 After abandoning this quintet, England should build around these fellas…

Jordan Pickford
It’s easy to forget how many difficult decisions Gareth Southgate had to make before this World Cup. In the goalkeeping department alone, there were calls from some for Joe Hart to be taken to Russia and calls from others for Jack Butland to be England’s starting goalkeeper. As Andy Dunn, chief sports writer of the Daily Mirror wrote with no little snark: ‘That’s a goalkeeper, with a relatively ­recent relegation to his name, who has done little but fish the ball out of his net in the last two seasons.’

Pickford has emerged as one of England’s best players in this tournament, the goalkeeper that Hart thinks he still is. There is passion and a degree of chest-beating after spectacular saves, but also consistency and calm to go with it. Most importantly for Southgate’s style, Pickford’s distribution is exemplary.

History shows England that while competition for places in goal is positive, regularly changing a goalkeeper only creates unhelpful uncertainty over the position. Pickford has the gloves; his display in Russia proves that he deserves to keep them.

John Stones
There are 12 defenders and goalkeepers in England’s World Cup squad, and it catches you slightly off guard to realise that Stones is the second youngest. Only Trent Alexander-Arnold is Stones’ junior.

At the age of 24, Stones has finally established himself as England’s senior central defender. It was his slight mistake, brought on by fatigue in the depths of extra-time, that gave Mario Mandzukic the space and time to score, but that should not cloud Stones’ excellent tournament. Boy became man.

Southgate wants to play the ball out from the back, and will want a central defender who can be the poster boy of that system for the next two World Cups. Stones will only be 32 at World Cup 2026. Cherish him.

Ruben Loftus-Cheek
If Southgate had his time again, you wonder whether he would do anything different. The lack of substitutions in midfield or attack between bringing on Marcus Rashford for Raheem Sterling and Eric Dier for Jordan Henderson in extra-time was telling. England lost control and lost the ability to find Harry Kane or Sterling/Rashford.

What England lack is an advanced midfield controller, someone to protect the ball, look as if they have more time than any other player and play passes through the lines. Dele Alli and Jesse Lingard both have the potential to be excellent England players for the next four years, but neither fit the description.

Loftus-Cheek might. It was he who most changed the game in England’s favour against Tunisia, and he who could have come on for the tired Alli against Croatia in the hope of having the same effect. With his stock never higher, an injury-free season at club level – at Chelsea or otherwise – should see him start for England.

Harry Kane
This has been an odd tournament for Kane. He will most likely end it as the Golden Boot winner and England’s joint-highest goalscorer in a single major tournament. He has led his country as captain to their best major tournament performance since 1996. And yet he also played a selfless role in Southgate’s system, dropping deep to hold the ball up and link play. He did so while looking half-fit ever since the injury sustained against Colombia.

There is no England player ranked higher in the world in their position than Kane. He is a magnificent goalscoring centre forward who also understands the need to be sacrifice himself for the good of the team. There is not one iota of arrogance of self-obsession.

What’s more, Kane does not turn 25 until the end of this month. He is the key player in the next four-year cycle. He can take England on from here.

Trent Alexander-Arnold
A man so disgustingly young that he was not even born when Michael Owen scored his beautiful goal against Argentina in 1998. Alexander-Arnold was taken by Southgate to Russia for experience as much as use, with Trippier establishing himself as the best right-back in the tournament. His time will come.

Alexander-Arnold is exactly the type of player England must build around, and who you suspect Southgate will. He’s young, can play in multiple positions, is a regular for an elite club and has shown no fear in taking several large steps forward in a short period of time. These are the boxes that Southgate demands are ticked for you to become part of this journey.

The only question is where he fits in. If Trippier has the right wing-back slot sewn up for now and Kyle Walker, Stones and Harry Maguire look a reasonable bet to keep their places, there is no obvious fit in the starting XI. Could Southgate consider a central midfield role next to Jordan Henderson?