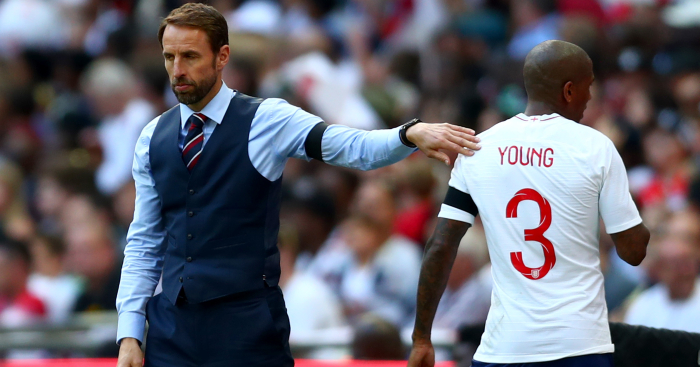 After the five to build around, here are five for England to discard.

Ashley Young
No player let England down in this tournament, but Young might just have been our weakest link. It is hardly his fault that he doesn’t offer the ability to hit the line and cross the ball with his left foot, but the defensive side of his game also came slightly unstuck against Ante Rebic in the semi-final.

Young has been an excellent stopgap for England – better than anyone thought he would be – but it is now time to thank him for his service and shuffle him away from centre stage. At 33, he has passed his peak and will surely soon start slowing down.

The great hope is that Danny Rose can have a better 2018/19 than 2017/18 or that Ryan Sessegnon takes the Premier League by storm and can be used as an attacking left wing-back. We do have options. Which is lovely.

Gary Cahill
An unused substitute for England’s two friendlies against Germany and Brazil and left out of the squad entirely for the two matches in March, Cahill was a slightly surprise member of this World Cup squad. The reasoning was that Hart’s absence created a vacuum of defensive leader, and Cahill fitted the bill.

He has remained a reserve throughout, Cahill’s only minutes coming in the mid-tournament friendly against Belgium. That doesn’t mean that the decision to bring him to Russia was a mistake, but it does offer evidence that England have moved on.

With Alfie Mawson, Jamaal Lascelles, Joe Gomez, James Tarkowski and Steve Cook (leave it, I’m delicate today) waiting in the wings, we can move on with gratitude to Cahill but bright hopes for the future. Two years ago, he seemed like the only reliable central defender we had.

Danny Welbeck
There was an argument that the final 75 minutes of last night were made for Welbeck. Run the channels, try his hardest and give Croatia something to think about that might stop them surging forward at will. He might have kept Sime Vrsaljko busy – it was his cross that set up the equaliser.

But if Welbeck isn’t going to be used in this situation, when England needed a spark, he never will be. His selection for this tournament, having scored 15 league goals in 82 matches since the last World Cup, was by default rather than merit. The other strikers to have been called up by England in the last year and didn’t go to Russia: Tammy Abraham, Daniel Sturridge, Dominic Solanke, Jermain Defoe.

That has to be Welbeck’s last whimper for England. He is unlikely to command starting minutes in the Premier League at Arsenal this season, with Pierre-Emerick Aubameyang and Alexandre Lacazette beginning their first full campaign together, and Europa League goals just won’t do. And I say all this as a huge Danny Welbeck fan.

Jake Livermore
If England lack a midfield controller, they certainly don’t lack a midfield sitter. Need a player who can screen a defence adequately without doing much tackling or intercepting, but will play simple passes? England have you covered. Jordan Henderson, Eric Dier and Fabian Delph were three included in this squad alone.

Which all means that we don’t ever need to resort to Livermore again, who unfathomably made it onto England’s list of back-ups for the 23-man squad. He’s now 28, a Championship footballer who didn’t play particularly well during West Brom’s relegation season and hardly has Premier League clubs falling over themselves to drag him back out of the Football League.

If this all sounds harsh, it is. This England squad might be likeable and have harnessed a mood of friendly optimism, but progress doesn’t come through ducking tough decisions. Beneath the gentle exterior and Marks and Spencer waistcoat, Southgate must be steely.

Adam Lallana
Undoubtedly the most controversial member of this list, but it’s quite hard to see how Lallana makes it back from here. Having got injured at the worst possible time, just as Liverpool started soaring, he faces a difficult battle for a starting place at club level. That list of Liverpool midfielders competing for (probably) three positions: Naby Keita, Jordan Henderson, James Milner, Fabinho, Alex Oxlade-Chamberlain, Georginio Wijnaldum, Lallana.

At international level, Lallana suffers from an awkward reputation: he was England’s Player of the Year after a 12 months that had produced our most humiliating tournament elimination in history. For all the plaudits for those performances, he is slightly tarnished by what he was part of rather than celebrated for what he was.

Now 30 years old and with serious injury doubts still lingering, it is difficult to see a way back. The only way he commands a start is in a 4-3-3, and Southgate isn’t going to abandon three at the back.