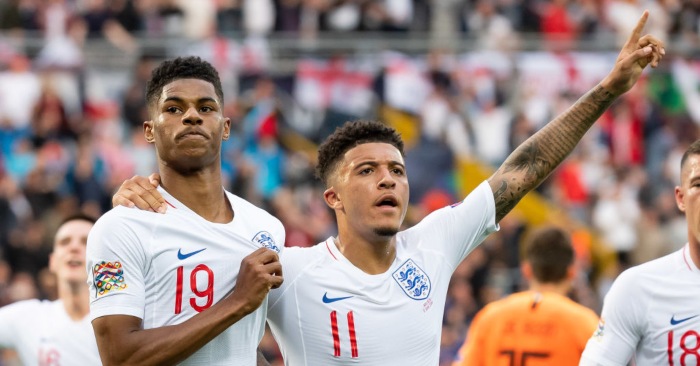 There are plenty of reasons to be cheerful at Old Trafford, but the reality remains that Manchester United sit a staggering 37 points behind rivals Liverpool in the Premier League. It’s a gap that won’t be bridged by their current squad – they need reinforcements. The quality of their summer (or autumn) signings will likely depend on whether they can avoid their season ending in disaster, but assuming they do, here are five players Man Utd have been linked with that would improve them for next season…

Five players (other than Werner) that would improve Liverpool

Jadon Sancho
Like Kai Havertz and Chelsea, Jadon Sancho and Manchester United would be a perfect match.

After a good start, Daniel James has looked more and more out of his depth as the season has gone on at Old Trafford. He’s a fantastic option from the bench – with his frightening speed – but is far from a starter in a title-challenging side. Liverpool have Mo Salah, Manchester City have Riyad Mahrez and Bernardo Silva, while Chelsea have Hakim Ziyech arriving from Ajax; United need a right winger of similar quality. And Sancho – if he isn’t already – certainly has the potential to be the best of the bunch.

He’s 20, and English, which ticks the youth and homegrown boxes on Ole Gunnar Solskjaer’s transfer checklist, and the strife he’s caused Borussia Dortmund with his off-field antics, which in some cases could be described as youthful exuberance and in others downright stupidity, would be less of a problem at United.

Firstly, securing a move to one of the biggest clubs in the world brings scrutiny no matter the circumstances. Add to that the fact he’s arguably the best young player in Europe, English, and will cost north of £100million, every little thing he does will be analysed and picked apart; he’ll quickly realise the benefit to keeping his head down and playing football.

And in Marcus Rashford, he’s got the perfect role model for doing just that, who’s not only kept his head down when he should, but more importantly, lifted it when it matters most.

Dean Henderson
Ole Gunnar Solskjaer leapt to David de Gea’s defence after Roy Keane’s scathing criticism of the Manchester United goalkeeper after their 1-1 draw with Tottenham. The Spain international was at fault as he was unable to keep out Steven Bergwijn’s fierce drive on Friday, but Solskjaer maintained that “David is the best goalkeeper in the world”.

Does the United boss actually believe that or was he giving confidence to a player lacking in his own? Either way, he’s wrong. De Gea has made a number of high-profile errors this season, and while previously he often single-handedly won United games of football, he’s now more likely to cost them points than earn them.

And there’s an easy fix: United already own a better goalkeeper with Premier League experience in Dean Henderson. Solskjaer has insisted Henderson will at some point be United’s No.1, and the future is now. Particularly with the loanee reportedly ‘wary’ of signing a long-term deal at Old Trafford.

It’s difficult to drop a player that has made such a significant contribution to your club, and De Gea is a United legend, winning the most Player of the Year awards in the club’s history (admittedly during a pretty lean spell). But it’s those sorts of decisions that made Sir Alex Ferguson so brilliant, the tough calls Solskjaer will have to learn to make.

Raul Jimenez
The Wolves man is just a brilliant striker; a proper number 9. He has a tidy technique, he’s great in the air, his movement in the box is second to none, he scores goals, is unselfish – he leads the line better than anyone in the Premier League. And United do need a striker.

Marcus Rashford has had a great season, but with him playing better from the left, Anthony Martial has been United’s focal point down the middle, and it just doesn’t work.

The Frenchman goes missing for large periods in games. He rarely threatens in behind, doesn’t have the physicality to win the ball in the air or bring it down, and most of the time appears to be standing still. In truth he would probably much prefer to be on the left where Rashford is, but the England international has surpassed him this season and if he wants to play there he will likely have to do so from the bench.

The creativity of Paul Pogba and Bruno Fernandes is wasted if they don’t have a striker willing to make the runs for them to find, and Jimenez simply offers far more than Martial in that regard.

Wolves are rumoured to want anywhere between £40m and £100m for the Mexican, depending on the source, and while the top end of that valuation would be far too great an outlay for a 29-year-old, United signed a not dissimilar player in Robin van Persie for £30million in 2012, who at the same age fired the Red Devils to the title.

Benoit Badiashile
Harry Maguire and Victor Lindelof have been great for United this season, particularly recently, conceding just three times in the last 12 games. But the last goal – Steven Bergwijn’s opener for Spurs on Friday – highlighted their biggest issue, the lack of pace and mobility.

Which Benoit Badiashile, Monaco’s 19-year-old, has in abundance. The Frenchman broke into the Ligue 1 side last season under Thierry Henry – who gave glowing reports of the centre-back, despite not being too impressed by his manners…

Thierry Henry isn’t impressed after Benoît Badiashile forgets to tuck his chair at the end of the press conference. 😂 pic.twitter.com/Dt5RoeWU2X

And after initially catching the attention of Valencia and Bayer Leverkusen, United are now among ‘bigger’ European clubs thought to be interested.

Badiashile is the sort of centre-back it’s easy to assume was moved back from playing in midfield. He brings the ball out from defence, and unlike Maguire – whose forays into opposition territory are often a cause of tension rather than a release of it – he exudes confidence as he does so. His touch is assured in tight areas and he’s got that knack for picking passes through the lines, a valuable commodity, particularly in a United team containing Pogba and Fernandes.

Badiashile is unlikely to displace either Maguire or Lindelof immediately, but would provide some much needed depth given Eric Bailly’s injuries and Phil Jones being, well… Phil Jones. He could be available for as little as £15million. Worth a punt.

Nuno Mendes
Again, more one for the future, the teenager has been described as ‘one of the pearls of Portugal’ and the president of his club Sporting Lisbon claims he is “the best Under 19 left-back in Europe”.

Nuno Mendes made his senior debut in Sporting’s 2-0 Primeira Liga win over Tondela on Thursday, which immediately prompted the club to hand him a new five year contract the very next day, with a £40million release clause included. Clearly quite the performance.

Known for his pace and attacking intent, Mendes could offer something United don’t currently have – a real attacking threat from left-back. This is not an observation made to denigrate United’s current options, but Brandon Williams – for all his quality – isn’t known for his cutting edge in the final third and Luke Shaw is a far more defensive player than when he arrived from Southampton six years ago.

While Liverpool’s wonderful full-back duo have shown what is capable on the attacking front, Ole Gunnar Solskjaer of course doesn’t have to copy Jurgen Klopp’s style simply because they are the current benchmark. It may be that the United boss prizes defensive solidity over creativity in those areas, that certainly appears to be the case. But with Klopp himself said to also be targeting Mendes, if Solskjaer does fancy dipping his toe in the water of raiding full-backs, he might just want to pip his counterpart to his signature. What’s £10million anyway?