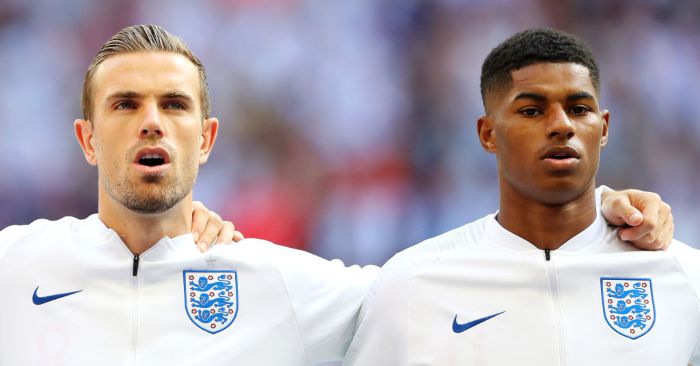 Marcus Rashford
“I think that everybody needs to play their part in this national effort – and that means Premier League footballers, too,” said Matt Hancock at the beginning of April.

“Given the sacrifices that many people are making, including some of my colleagues in the NHS who have made the ultimate sacrifice of going into work and have caught the disease and have sadly died, I think the first thing that Premier League footballers can do is make a contribution, take a pay cut and play their part.”

Marcus Rashford and his contemporaries would have been forgiven for indulging in similarly aimless finger-pointing. But the response of Premier League footballers has been to swap condescension and political point-scoring for far more subtle, purposeful and powerful messages.

Hancock and those of his ilk, fluent only in the language of shouting, scoffing and aiming cheap digs at the opposition, have been helped down from their herd of high horses and had pressing issues pointed out to them.

“Make a contribution, take a pay cut and play their part,” was the glib platitude offered by the Health Secretary, who tweeted that ‘only’ 36 people had died from the global pandemic on Saturday as proof that ‘we are winning the battle against this horrible disease’. While he pats himself on the back for a UK death tally that ticks towards 42,000 and sits third worldwide, Rashford insists that the three million meals a week he and FareShare have secured for vulnerable children ‘is just not enough’. The difference is stark.

That open letter is powerful and stirring. Rashford expresses his ‘determination to become part of the solution’, calls out the ‘system failure’ that has led to 200,000 children being unable to access food and says ‘this is not about politics; this is about humanity’.

‘Political affiliations aside, can we not all agree that no child should be going to bed hungry?’ he adds. ‘I would be doing myself, my family and my community an injustice if I didn’t stand here today with my voice and my platform to ask you for help.’ What an absolute hero.

An Open Letter to all MPs in Parliament…#maketheUturn

Jordan Henderson
The juxtaposition was obvious. At the end of a week that started with Liverpool making an embarrassing but welcome furlough U-turn, their captain led by example. The PlayersTogether initiative was launched and Jordan Henderson was at the forefront.

It was an important solution at a time Premier League players were coming under intense pressure to take pay cuts. This way, they could raise and donate money that would go directly to the NHS, instead of benefiting only billionaire club owners.

Henderson was, by all accounts, the quiet orchestrator behind the movement, the “brilliant” unifier of players from all 20 top-flight teams to help the nation at a time of immense need. He impressed in meetings and even bore the predictable tabloid brunt. His contribution has been understated but incredible.

Troy Deeney
Troy Deeney is like Marmite: salty, jarring and invented by a 19th century German scientist. People also tend to love or hate him, with no middle ground, on the basis of him being a sentient human with an opinion.

Yet without the Watford striker, Project Restart would look considerably different. It might even have encountered insurmountable road blocks further down the line instead of the considerable number of bumps it has already overcome.

“I think the concern is very much that Phases Two and Three have not been clearly laid out,” he said last month. “There has been a lot of what I would class as simple questions that have not been answered. For example you can talk about the BAME situation. Government guidelines are saying it is four times more likely for people of colour to get the illness and twice as likely to have lasting illnesses, but there is no extra screening and no additional checks being done on any players because it costs too much money.

“Simple things like that are where people are asking questions and it’s not being answered. When people can’t answer the questions, you start to panic and start to worry.”

It was an important public statement at a time communication was a key problem. Deeney would have known the vitriolic response he was opening himself up to in some quarters but the difficult questions had to be asked.

Cedric Soares
“We have our hearts full. We’re not used to people giving us a lot of value. We were very touched by your attitude, I think it was a wonderful gesture,” said a nurse at the Montijo hospital that received a donation from Portugal international Cedric Soares last month.

The Arsenal right-back described it as a “small” deed but the list of supplies Cedric contributed suggested otherwise. Cardiac monitors, cars, puncture benches, thermometers, chairs, clogs and much more went towards the cause in his native municipality.

That it was the hospital and not Cedric or his representatives who highlighted the charitable act spoke volumes; this was no token gesture. Shkodran Mustafi has also donated 16,000 meals to people in London and Mesut Ozil has pledged £80,000 to help Muslims in Turkey as Arsenal players have used their platform to help others.

Weston McKennie
As perhaps the most prominent American playing in the restarted Bundesliga, Weston McKennie perhaps felt obliged to send a message. Jadon Sancho inevitably dominated the headlines with his own tribute to George Floyd over a weekend which saw Marcus Thuram and Achraf Hakimi make their voices heard. But it was McKennie who led the way.

Wearing a ‘Justice for George Floyd armband’ against Werder Bremen, the Schalke midfielder dismissed the idea that it was “a political statement” and accepted whatever “consequences” may have come his way. The German FA and FIFA thankfully thought better of it.

To be able to use my platform to bring attention to a problem that has been going on to long feels good!!! We have to stand up for what we believe in and I believe that it is time that we are heard! #justiceforgeorgefloyd #saynotoracism pic.twitter.com/TRB1AGm0Qx

“I felt like it was my responsibility and my duty, especially being American, and with the situation going on in America,” he added. “I felt like it was my duty and my responsibility to go out to show justice for George Floyd. This is a problem that’s been going on way too long. We’re the only league that’s playing right now, all eyes are on the Bundesliga. So I felt like there’s no better way and no better time than now.”