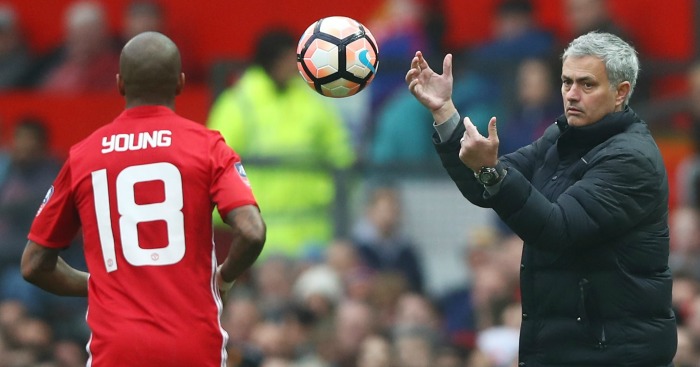 Ashley Young
“I don’t know if I can say this but – oh well. If I’ve gone to get a takeaway and I get chips. I like to match up the chips in length.”

I originally searched for the quote above as I pondered opening this section with a laboured pun involving Ashley Young, chips, shoulders and failed transfers, but there’s no need. The man measures his chips, and that is neither euphemism nor laughing matter.

Nor is Young’s situation – or at least not to him. The 31-year-old carved out a reputation as a utility player under Louis van Gaal, starting games on either flank, and even being introduced as a centre-forward in some games. But Jose Mourinho likes his specialists, and while Young can fill in in numerous positions, the new United manager prefers to put square pegs in square holes.

All this means that while Young has not featured in the Premier League since November, Mourinho ensured he would not leave in January. So no moving to another top-flight club, and no taking a hefty wedge to move to China. You’re needed for the assault on sixth place, chief.

Mathieu Debuchy
When Gabriel Paulista is doing a better job at right-back, it’s probably time to call it a day. And when Carl Jenkinson is in the same predicament but is attracting interest and you are not, retirement is a genuine possibility. Such is the stock of Mathieu Debuchy, part-time Arsenal injury-sufferer, part-time Daniel Storey lookalike.

This is not the first time Debuchy has found himself back in the arms of Arsene Wenger after failing to find himself a new home. This time last year, the Frenchman accused his manager of blocking a move to Manchester United, which seems awfully hilarious even 12 months on.

Debuchy turns 32 in July and has played 16 minutes of first-team football this season. The poor bairn just wants to fly the nest, but Wenger simply won’t let him. It’s not like Arsene to show too much loyalty to a fringe player.

Leonardo Ulloa
‘I need to feel like a footballer again,’ stated big old loser Leonardo Ulloa last week. The 30-year-old joined Leicester in 2014, was their top scorer as he fired them to survival in 2015, and played an unheralded part in their most remarkable Premier League title victory in 2016. But 2017 was supposed to signal new beginnings for the striker. After starting just eight games across the last one-and-a-half league campaigns, he wanted a new challenge.

Claudio Ranieri is claimed to have promised him as much in the summer, but the Italian has since reneged on any agreement. Sunderland made three separate bids for Ulloa, with David Moyes briefly forgetting he has never played for Everton, and the Foxes rebuffed each of them. The striker is thereby left at a club he is refusing to play for. It’s a sorry affair.

Gaston Ramirez
Perhaps Ulloa would have allowed a smirk to break across his James Bond villain-esque face when he first discovered that Leicester were victims of someone else’s hardball stance this winter.

The Premier League champions – because we can still say that for five months – made their interest in Gaston Ramirez known and, for what it’s worth, the player repaid the favour: he handed a transfer request in at Middlesbrough.

He soon discovered that this was not Football Manager, and transfer requests mean diddly f*** all. Aitor Karanka rejected an offer from Leicester for the midfielder, and told them to bugger off unless they were going to match their valuation. They did not, and so the 26-year-old will return to the first team after a brief hiatus. His last appearance? Against Leicester on January 2. Jamie Vardy clearly tapped him up.

Asmir Begovic
“For me, it is about wanting to play. I find it very difficult, not playing for a long time and that’s something that I would like to do.”

Asmir Begovic would go on to outline his intention to leave Chelsea in January. The Bosnian has played five games this season, each appearance coming in either the FA Cup or EFL Cup; he is yet to play a single minute in the Premier League.

The 29-year-old almost got his wish. Bournemouth expressed an interest, while Watford came in with an offer which included Heurelho Gomes as part of the deal. Chelsea, refusing to allow Heurelho Gomes to become a Premier League winner, turned down both offers.

It leaves Begovic back where he started, and in the very same role he was assigned when he joined in summer 2015. Quite why he is surprised that he is back-up goalkeeper 18 months after joining Chelsea as their back-up goalkeeper is anyone’s guess.