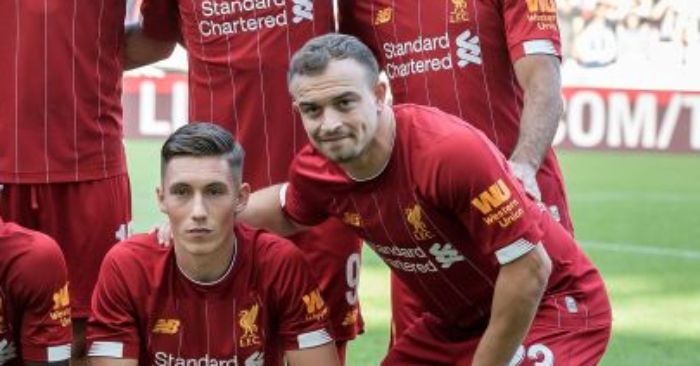 Oh bloody hell, really? Five? And we can’t count Lovren or Lallana on the spurious grounds that they’ve already left? Ah for fu… Okay, fine. Here are five players that Liverpool simply must ditch if they are ever to achieve anything. Oh, and they should probably keep these ones.

Xherdan Shaqiri
Huge fan of Shaqiri. Love the way he plays, and also got on second mentions once for describing him as a “barrel-shaped magician” which WAS OBVIOUSLY ITSELF A JOKE ABOUT ELEGANT VARIATION BUT I’M NOT BITTER AND I’M TOTALLY OVER IT BECAUSE IT WAS TWO YEARS AGO NOW AND I’M NOT THAT PETTY.

Anyway, despite all that, he’s clearly the sparest part in the current Liverpool first-team squad now Lallana and Lovren have made this feature even more impossibly difficult than it already was. Still has three years left on his contract and remains, improbably, only 28 years old, but it’s surely time for the barrel-shaped magician to seek out pastures new after making just seven Premier League appearances in Liverpool’s title jaunt.

Loris Karius
Look, technically he’s still a Liverpool player and that’s more than good enough for our needs. Spent last season on loan at Besiktas and clearly 2018 Champions League final’s Karius should not be spending next year or any other years at Anfield.

James Milner
Several hundred years old and can’t keep going forever, surely? Is in fact only 34 according to “The Internet”, having made his earliest professional appearances as a toddler. Um. What else is there? Bad attitude. Dressing-room poison. Dreadful on Twitter. Look, we’re struggling here, okay?

Roberto Firmino
Nine goals? Nine? All season? That is absolutely dreadful. Completely unacceptable. You’re just not going to win anything with a striker who only scores nine league goals all season. Should he be Liverpool’s striker? Firmino, Clive.

Harry Wilson
Okay, this is partly (mainly) to nudge this up to the five names that are legally required for this feature, but there’s also something there. Wilson is nearing an age when a decision has to be made. His path to the first team at Liverpool looks extremely torturous, and his loan season at Bournemouth got increasingly taxing. At 23 he does need to be playing. Whether that’s another loan or a permanent deal, it would seem like a move to a slightly more ambitious mid-table side might be beneficial for all concerned. There, that’s five names. Invoice attached.