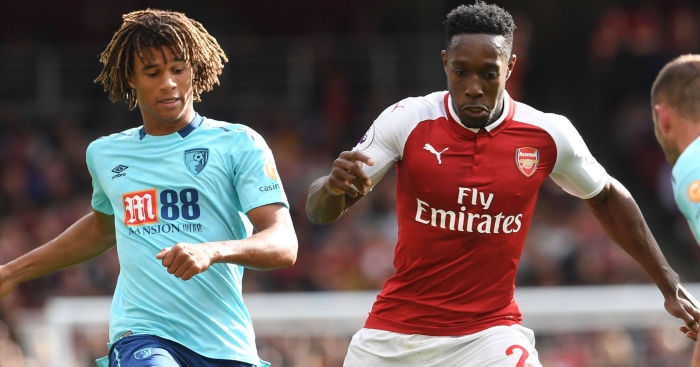 A few of the big boys will be looking at centre-backs and strikers. Here are five who will have caught the eye who are ripe for transfers…

Aleksandar Mitrovic
The Fulham striker’s start to the season has a few Newcastle fans doubting Rafa Benitez’s judgment. If Chelsea are willing to double Fulham’s £22million investment in just a few short months, then Mike Ashley will be choking on his spaghetti bolognese.

Mitrovic seems almost too convenient for Chelsea. The Blues have two centre-forwards: Olivier Giroud is contributing but not scoring and out of contract at the end of the season, while Maurizio Sarri still needs convincing about Alvaro Morata and his ability to lead the Chelsea line.

The evidence so far suggests Mitrovic can make the step up. The 24-year-old has followed his 12 goals in 15 starts that fired Fulham to the Premier League by keeping pace with Harry Kane and Sergio Aguero in the opening weeks of the new season. As Giroud pointed out, Sarri needs his centre-forward to do more than just score but Mitrovic appears willing and capable to press from the front and link play when Chelsea win possession. Of course, Fulham would be daft to sell for anything other than silly money in January, but that wouldn’t – and maybe shouldn’t – stop Chelsea asking.

Danny Welbeck
Most of the focus on Arsenal players approaching free-agent status has centred on Aaron Ramsey, with the Gunners said to have decided to allow the midfielder to walk away, rather than stretch themselves by offering a salary increase. The future of Welbeck is rather less clear and there may be a few clubs looking at the striker as a possible bargain.

The England frontman has done what he can to convince Arsenal he is worth the investment with four goals in nine appearances this term, though three of those have come in the Europa League and Carabao Cup. Prior to starting at Fulham last time out – a London derby which came less than 72 hours after an away tie in Azerbaijan – the most Premier League action Welbeck had been given in one chunk was 15 minutes. And at Craven Cottage, his replacement for the last 28 minutes, Pierre-Emerick Aubameyang, weighed in with two goals and an assist.

So Welbeck’s prospects of being anything other than a squad player at Arsenal appear bleak. The former Man Utd striker will be 28 come January and during his spells at Old Trafford and the Emirates, he is yet to reach 100 Premier League starts. If he is ever going to be a starting striker, then it needs to be now and almost certainly away from Arsenal.

Everton were keen during the summer and Welbeck’s contribution since will have done little to put off the Toffees.

Nathan Ake
The Bournemouth centre-back was asked about speculation over his future during the international break and Ake responded as you might expect, simply to say that it was just “rumours that come on the internet”.

Those whispers involve a £40million bid from Tottenham and interest from Manchester United, who are both in the market for centre-backs. Doubts persist over Jan Vertonghen and Toby Alderweireld’s future at Spurs, while Jose Mourinho’s urgency to strengthen the centre of his defence is even greater than in the summer.

Having taken the step down from Chelsea, initially on loan in 2016 before a permanent move to Bournemouth a year later, to assert himself in the Premier League, Ake has demonstrated that he is ready to return to the top six. His style would complement both United and Spurs, though the 23-year-old appears tailor-made for Mauricio Pochettino. Bournemouth would also welcome a 100 per cent return on their investment and they are well-stocked for centre-backs if they cannot source an immediate replacement.

James Tarkowski
The Burnley defender is highly rated by Gareth Southgate and his performances this season will have caught more than just the England manager’s eye.

Tarkowski had to wait for his opportunity at Turf Moor while Michael Keane earned his big move, but it could now be the former Brentford and Oldham centre-back’s turn to step up. His partnership with Ben Mee was a big factor in the Clarets’ Europa League qualification and the 25-year-old has built on that impressive debut season in the Premier League by starting the new one in even more impressive form.

No one has made more blocks or headed clearances this term, and Tarkowski is also in the top three for clearances and duels won. For any side looking for more solidity in defence, Tarkowski would feature on their list. And – similarly to how Tarkowski replaced Keane – Burnley already have a replacement ready to go in Ben Gibson.

Declan Rice
The teenager is taking his sweet time in deciding which country to pledge his allegiance so he’s not likely to rush into signing a new West Ham contract.

The Hammers are desperate to persuade Rice to extend his terms beyond the end of the season and his form indicates why. The 19-year-old had already demonstrated his quality at centre-back prior to this season, when he has been pushed into a defensive midfield role. That the Hammers’ first win and subsequent improvement came after Rice was given his first start of the campaign at Everton last month is probably no coincidence.

Of all the Premier League’s midfielders, only Jordan Henderson has a better tackle success rate while Rice’s passing accuracy is equal to that of N’Golo Kante and Nemanja Matic. Rice was already catching the eye as a centre-back last season and his versatility, coupled with the fact his contract is ticking down, will perhaps give West Ham a headache in the coming weeks. Man City may well be sniffing…