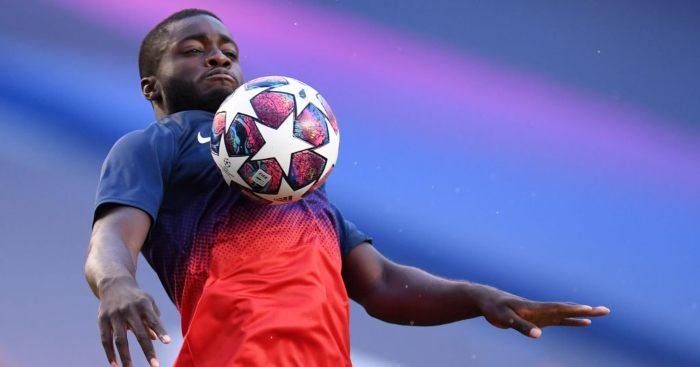 Manchester United have finally arrived at the Chelsea-hosted Premier League transfer party. Donny van de Beek is an excellent bit of business, but Ole Gunnar Solskjaer and Ed Woodward have got much to do if they are to challenge for the title, or at least challenge the challengers. Signing these five players would put them in a position to do just that…

Dayot Upamecano
Diego Costa – Atletico Madrid’s veteran war horse, the scourge of many a world-class centre-back – saw his bad guy image torn to shreds in just 72 minutes of Champions League action against RB Leipzig. Faced with Dayot Upamecano, the cantankerous bully turned into a world-weary, petulant child: he had no answer to the centre-back’s superior power and presence.

Costa may be a shadow of the player that led Chelsea so brutally, but he still possesses the dark art shithousery: the pinches; the ‘accidental’ foot stamps; the elbow digs. Nothing fazed Upamecano – his skill was obvious, his confidence was extraordinary.

Leipzig recently extended the 21-year-old’s contract through to the summer of 2023 as they attempt to ward off the many clubs targeting his signature, but Upamecano has revealed that this does not preclude him from discussing his future with interested parties.

“I’ve been in Leipzig for more than three years, I feel good. I’ve been in demand, I talked to some clubs, it’s true, but I’m not in a hurry.”

Apparently his confidence knows no bounds, and his comments suggest that he’s simply waiting for the right offer, whenever that may come. Now would be as good a time as any for United, who have loads of centre-backs but few – if any – close to his class.

Thiago Alcantara
Thiago Alcantara’s desperation to leave Bayern Munich is strange enough: the fact that no-one has bitten Bayern’s £27million hand off is even weirder.

He is the Tom Brady of proper football; there is no-one better at dictating the pace and flow of a game. His first touch is exemplary, his awareness of space and positioning is near-perfect and his range and speed of passing – whether when switching play or threading through the lines – is always on point.

It seems Thiago has his heart set on a move to Liverpool. But the Reds are reportedly yet to open talks; the Spain international has hung his hat on a rumour built on nothing but hearsay and an off-the-cuff “world class” comment from Jurgen Klopp.

United, however, have reportedly ‘made contact’, with Bayern ‘inviting’ them to bid for Thiago. Why do they need to be invited? It’s baffling.

Donny van de Beek is a wonderful midfielder, but Solskjaer will struggle to play him, Paul Pogba and Bruno Fernandes in the same team. Thiago can be the aspirin to the welcome selection headache Solskjaer and Woodward have created. With him at the base of midfield, the other three can be rotated ahead of him; it would be the best midfield in the Premier League.

Sergio Reguilon
Zinedine Zidane does not want the best left-back in La Liga at Real Madrid. Voted into the team of the year after a stellar season on loan at Sevilla, Sergio Reguilon is still deemed below Marcelo and Ferland Mendy in the pecking order at the Bernabeu.

If the widespread interest from some of the top clubs in Europe wasn’t evidence enough of Reguilon’s ability, United – and Aaron Wan-Bissaka in particular – saw first-hand the damage his marauding runs down the left flank can do.

The full-back positions at United aren’t a problem per se, but they’re far from a strength. Brandon Williams has been impressive and will likely develop the attacking side of his game, but as the Van de Beek signing has illustrated, Solskjaer wants competition for places to drive the improvement of everyone in the squad.

United are said to have submitted a ‘very interesting offer’ for Reguilon. A reported fee of £18million would be an absolute steal.

Ricardo Pereira
The loss to Sevilla was one of very few (possibly the only) time last season that Wan-Bissaka struggled defensively. His speed, positioning and Inspector Gadget-like limbs make him arguably the best one-on-one defender in the Premier League.

But while the realisation has been slow, it does now appear to be dawning on United fans that he does limit them at right-back. The temptation to shoehorn him into the side, by using him in a back three like Cesar Azpilicueta in Chelsea’s title-winning season, is understandable but flawed.

Adding another defender may improve their defence but weakens the team as a whole. United’s strength is in attack; to reduce numbers on the front foot to get Wan-Bissaka in the team by any means necessary makes little sense.

Leicester may have sold Ben Chilwell for £50m in yet another bit of transfer sorcery, but they still have retained their best full-back in Ricardo Pereira. We’re not saying the Foxes would have secured Champions League football had the Portugal international been fit for the last nine games of the season but, in fact no, f*** it, that’s exactly what we’re saying.

Pereira is solid defensively and doesn’t go all light-headed in the final third – he’s a better all-round option than Wan-Bissaka.

They now have one proper (borrowed) No. 9 in Odion Ighalo and three sort-of strikers in Anthony Martial, Marcus Rashford and Mason Greenwood. Come January, when Ighalo returns to China, Solskjaer will have three players for the front three positions and no worthy replacements.

Raul Jimenez is the best line-leading striker in the Premier League and is someone you could easily picture fitting in brilliantly with United’s forward-thinking players, but Nuno Espirito Santo and Wolves have again managed to shield their top stars from potential suitors with their unfathomable nothing-to-see-here magic.

United still hope to bring Jadon Sancho to Old Trafford, but may now have to wait until next summer. But the prospect of that makes the task of luring striking reinforcements more difficult, leaving them out of the running for the likes of Jimenez. Not only would a new signing have to fight for his place against the current front three, but will then likely find himself more firmly rooted to the bench if or when Sancho does arrive.

Andrea Belotti was linked with a move to join United in 2017 after a standout 28-goal season for Torino, but the Red Devils were put off by the sky-high asking price. The Italian has not reached that impressive goal mark since, but has double figures in each of the last five seasons, scoring 16 in this campaign as he captained his side to avoid relegation.

Belotti is a leader and an experienced goalscorer: not a guaranteed starter, but someone who will push from the bench. That sounds kind of ideal right now.