If Manchester City are going to catch Liverpool, Guardiola would be advised to make these five players key. 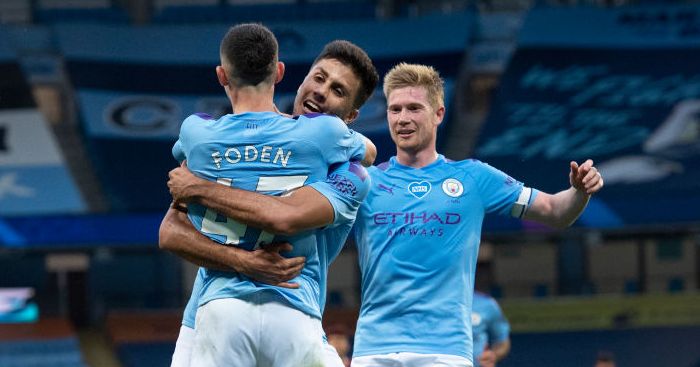 Long way to go if Manchester City are to catch up with Liverpool. Starting point: build the team around these fellas having cast these ones aside…

Phil Foden
We’re all sorry to see David Silva leaving the Premier League, a player who has become so celebrated upon his departure that he might now in fact be in danger of becoming the most correctly rated under-rated player of all time. Just another accolade for the great man.

Anyway. The upshot is that it might finally be Phil Foden’s time to shine. He already seems like the oldest 20-year-old in history, so long and loud have been the demands from outside the Etihad for the midfielder to get more minutes for a team that spent the seasons before this one quite literally smashing all records while the teenaged Foden mainly watched on. Increasingly more involved these days, though, and really does look ready for the challenge. Scored five goals and added two assists in 892 minutes of Premier League football this season. If he can maintain that kind of record across thrice the minutes then all will be good.

Raheem Sterling
Nothing much has felt normal or reassuring during the last few months, but Raheem Sterling putting his weird 2020 goal drought during the Before Times firmly behind him has been one of them. It’s hard to know what the future holds for any of us in the New Normal, but we can be enormously confident that for Sterling it involves an awful lot of arriving at the back post to provide the finishing touch to a slick passing move and being the subject of dreadful tabloid headlines.

Kevin de Bruyne
Always worth including the obvious ones. No need to try and be too clever. He’s the best player in the league and the absolute definition of the type of player around which to build a football team. Twenty league assists in a season is a daftness, especially when you also chuck 13 goals into the pot.

Rodri
Filling Fernandinho’s shoes is no easy task and Rodri hasn’t always got it right in his first season in England. The signs are growing more and more encouraging, though, with his performances during Project Restart notably impressive. Pep Guardiola has made a point of praising the 24-year-old midfielder in recent times, and while other factors are at play the results with and without him have been stark in recent weeks. In all competitions, City won six of the seven games Rodri started after football’s return, by an aggregate score of 29-2; they lost two of the five he didn’t.

Riyad Mahrez
It would be wrong to say Mahrez has been a peripheral figure at Manchester City since his move from Leicester, but he’s certainly never felt quite so important as he does right now. Even in this City side, reaching double figures for goals (11) and assists (12) in 33 Premier League appearances represents an impressive return.