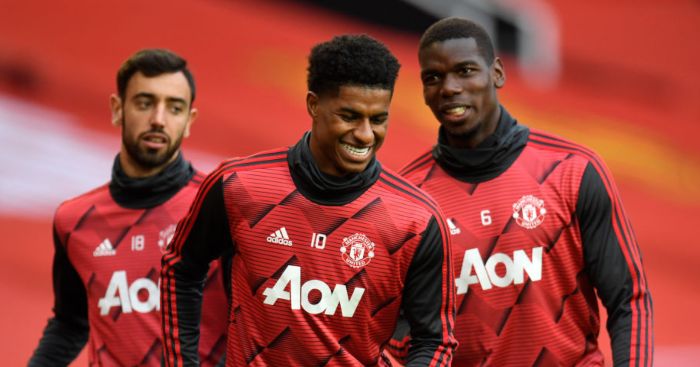 Bruno Fernandes
‘United have been monitoring Fernandes since 2015 but distanced themselves from him last summer because they decided to prioritise other areas,’ said the BBC Sport report in January. ‘They have assessed Fernandes closely this season and feel he has improved by becoming more mature, influential and tactically astute.’

The idea that Fernandes showed anything different in his final five months with Sporting Lisbon compared to his previous two seasons in Portugal is humorous, if only because it proves that every club will go to great lengths to save face rather than admit a potential mistake. Quite how he became ‘more mature’ or ‘tactically astute’ from August to January is a mystery. New year, new him, perhaps.

Manchester United should have signed him last summer. That is said in the sharp glow of glorious hindsight but it stands to reason. It is laughable just how much he has improved them.

Marcus Rashford
Whisper it so quietly that it barely registers but Marcus Rashford’s four full Premier League campaigns have returned five, seven, ten and 17 goals from a nominally wide position, compared to Cristiano Ronaldo’s four, five, nine and 17. That’s not to say that Manchester United have Wythenshawe’s first Ballon d’Or winner within their ranks, ready to emerge as a talent capable of defining not only a generation but an entire genre. But with as many Premier League goals this season as in his last two combined, Rashford is starting to develop from a fine forward into a genuinely brilliant one.

The second and third most expensive centre-halves in Premier League history even benefited from better goalkeepers being signed in between; the first man on that podium has had no such fortune. He has handled the leap from mid-table to top-four captain with confidence and poise, but without grace, pace and a small head.

Mason Greenwood
He does not exit his teenage years until October 2021 but Mason Greenwood has already left this sorry lot behind in his quest to kick footballs really rather hard and accurately. Ten Premier League goals in a single season is a phenomenal achievement for a player who didn’t start in the competition until December and ended up playing less than Andreas Pereira. Whether Jadon Sancho joins or not in either the immediate or distant future, Greenwood has a squad place at United for as long as he wants it.

Paul Pogba
It was in May of last year that Paul Pogba was named on a list of five players Manchester United should ditch going forward. How times change.

In mitigation, the reasoning was that, as the lightning rod for criticism, Pogba’s presence potentially prevented proper introspection. He was too easy an excuse, too convenient a scapegoat.

Both parties do seem to have moved on and matured since. Fernandes has been vital, sharing much of the burden Pogba has carried alone for years, and showing the Frenchman that the club can match his ambitions. Those two could form part of a title-winning midfield if the third wheel is good enough.