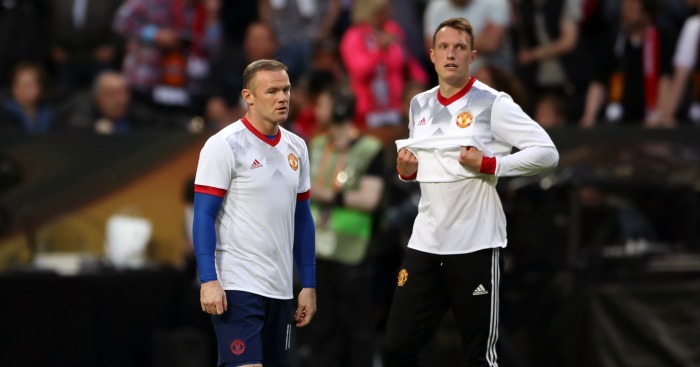 You’ve read the ones they must keep, now take a look at those who must be turfed out. Sorry, England…

Phil Jones
I want it to work out well for Phil Jones. I want him to overcome injury problems and show that, when fit, he can be a capable defender for Manchester United and England. Not first-choice, necessarily, but a good guy to have around.

But that’s the thing about back-up players: they need to be available. It may be a thankless, galling task to follow the team around the country and sit on the bench in 80% of matches, but it is also crucial at a time when strength in depth has never been more important. Yet if your reserve central defender is injured for at least three months of every season with various niggles and knocks, he becomes unreliable and therefore unfit for purpose. It is time for United to cut their losses.

Chris Smalling
Superb in the Europa League final, albeit against an Ajax team who barely laid a finger on United’s defence, Smalling is probably the United player whose potential sale would divide the most supporters. He enjoyed a run of form where he was the club’s best central defender, but has also regularly slumped into his old, unreliable ways.

With Eric Bailly the club’s future, and Jose Mourinho reportedly after a new central defender this summer, the best Smalling can hope for is to be the next cab off the rank. You only have to look at the clubs reportedly interested in signing him (West Ham and West Brom) to conclude that United surely need an upgrade.

Wayne Rooney
“I told him yesterday that he could be the key man but he can perfectly be here next season. He is a very important player for us. If he stays next season I’d be very happy.” Those were the post-Europa League final words from Mourinho on a player who has been firmly pushed from centre stage this season.

United supporters must hope that those were just post-victory platitudes. One of Mourinho’s biggest achievements this season has been easing Wayne Rooney out of the side with the minimum of fuss, paving the way for a summer exit to somewhere warm with a lower intensity league. What is the benefit of keeping a player in his physical condition and paying him £300,000 a week for the privilege? That’s more than Antoine Griezmann can expect.

Michael Carrick
A wonderful servant, and one who completed the set of club trophies available to him on Wednesday night. There is an argument for United giving Carrick a new one-year deal and using him as an adviser to the club’s younger players as much as a bit-part midfielder, but Mourinho can no longer rely on him.

With United’s midweek-weekend schedule hardly likely to ease next season, they need a reliable holding midfielder who can sit in front of the back four and recycle possession without breaking a sweat. And they need someone that can do it twice a week.

Ashley Young
Yeah, I’d forgotten about him too. It takes a special kind of squad player to start five league games in April and then be entirely forgotten by May, but that is the status of Ashley Young in this Manchester United squad. He has provided two league assists since September 2015, and scored one league goal since April 2015.

Quite honestly, Young is a bottom-half player at a side with title aspirations, given a new contract in August 2015 as a thank you for his fine form the previous season and a pay rise up to £110,000 a week. For a club that should pride itself on being cut-throat in its pursuit of excellence, it was a ridiculous decision.