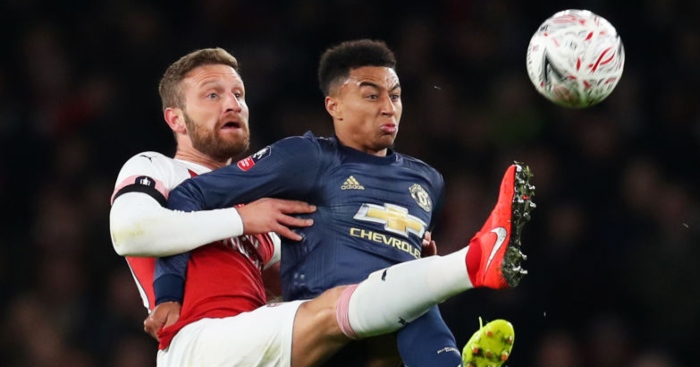 Jesse Lingard – at risk from Bruno Fernandes
The arrival of a genuine goalscoring No. 10 (eight in 17 league games this season for Sporting) is not good news for any of those who have bumbled along in that position for Manchester United this season, switching between ineffective and downright infuriating. Jesse Lingard, Juan Mata and Andreas Pereira have scored a grand total of one Premier League goal this season. Between them. In totality. When you add them all up.

But it’s particularly bad news for Lingard, who was on the pitch being sworn at by Ole Gunnar Solskjaer at almost the same time that Fernandes was landing in Manchester for his medical. “One more time and you’re f***ing off!”? How about one more game and your United career is over? Out of contract next year, United will surely cash in on Lingard this summer – though we cannot fathom if they would value him at £5m or £50m.

Shkodran Mustafi – at risk from Pablo Mari
Mikel Arteta has said all the right things – “I can accept a mistake, no problem. What I’m not going to accept is someone who makes a mistake and then stops playing, doesn’t want the ball and doesn’t want to make decisions” – about backing Shkodran Mustafi after his re-integration into the Arsenal squad. But even after learning that the German’s ankle injury would sideline him for only weeks rather than months, Arsenal still moved for Spanish centre-half Pablo Mari.

With the best will in the world, Arsenal’s long-term future is not David Luiz or Sokratis – and nor does it seem to be Rob Holding, who remains low on Arteta’s list of favourites – but it could be Mari alongside William Saliba. We would be surprised to see Mustafi start another game for Arsenal that’s not being played on a Thursday night.

This makes sense, providing Mari adapts well. By the start of next season, Luiz will be 33, Sokratis will be 32 and Mustafi will either be gone or have one year remaining on his deal.

Lucas Moura – at risk from Steven Bergwijn
“Every player wants to play, it doesn’t matter the position. But everyone knows I am not a No. 9, it is not my best position,” said Lucas Moura, full of praise for new boss Jose Mourinho before his supposed saviour pushed him back up front as a No. 9 in the absence of Harry Kane. Six games later and Lucas has scored just once against Middlesbrough and largely looked a little lost.

And when he looks around the dressing-room at Mourinho signings and favourites Gedson Fernandes, Giovani Lo Celso and Dele Alli, he will know that he is probably the odd man out when Bergwijn claims his place on either wing or up front. He will likely leave in the summer and Spurs fans will shrug but remember the glorious hat-tricks. Such glorious hat-tricks.

Manuel Lanzini – at risk from Tomas Soucek
No, they do not play the same position, but can you see David Moyes dropping either of his Brexit midfielders for his new giant Czech? It’s far more likely – especially as Soucek has scored more league goals this season than any of his new Hammers teammates – that he will form a three-man central midfield with Mark Noble and Declan Rice, leaving Lanzini, Pablo Fornals, Robert Snodgrass, Felipe Anderson and Andriy Yarmolenko to battle for two wide positions when all are fit.

Lanzini was booed from the pitch on Wednesday night as the Argentine really is carrying the air of a man who cannot really be arsed. His last goal for the Hammers came on the final day of last season. And Moyes is at risk of alienating the fans as he insists: “I trust him, I believe he can get back to those levels. He has had a bad injury and I need the supporters to be right behind him because we need him. At the moment he is our flair, he is our person that might make the difference. There is nobody more behind him than me.” Which is literally true.

Lanzini by a country mile. https://t.co/gTfM6yX9KA

John Lundstram – at risk from Sander Berge
You don’t break your club transfer record to sign one of the most promising midfielders in Europe and then put him on the bench, even if you are the fabulously loyal Chris Wilder. And Lundstram is likely the misshapen jigsaw piece in that midfield as he has been usurped in recent weeks by Everton loan man Muhamed Besic, having seemingly run out of steam after a barnstorming start to the season.

Lundstram is yet to sign a new Blades deal – and he is unlikely to be persuaded to commit by the sight of handsome giant Berge walking onto their south Yorkshire training ground. The good news is that he has probably done enough to earn another Premier League gig.