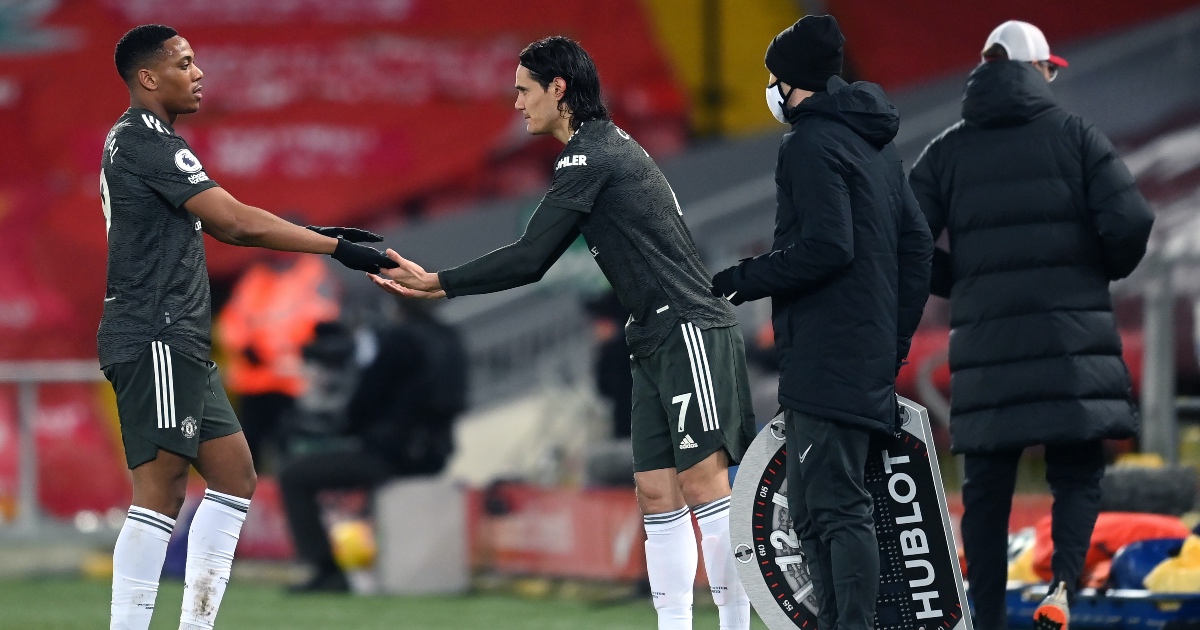 Things weren’t quite right before they made these changes. We’ve picked five examples of upgrades made during this Premier League season…

Bukayo Saka for Willian
It feels like Bukayo Saka has been raiding down the Arsenal wing for years, such is his confidence and standing in the side. He is now the go-to man, the player to drag them out of holes and spark them into life. But he started this season as a back-up: the Jack of all trades before becoming the master of one.

The first five games of the season saw him play two in central midfield and one at left-back, while he was left on the bench for the other two.

Two assists from Willian on his debut had Arsenal fans jeering at their blue rivals, while the Chelsea faithful knowingly waited for the inevitable slump following a good performance from the Brazilian. But his woes have served to highlight the brilliance of Saka, who remains remarkably grounded for a young player of such obvious talent.

Edinson Cavani for Anthony Martial
Back in June last year, we tipped Manchester United to sign a proper striker as ‘Anthony Martial as the focal point, just doesn’t work’. Literally the same day that article was posted he banged in a brilliant hat-trick against Sheffield United and finished the season on a high, claiming six goals and four assists in the final eight games. Typical.

It was Raul Jimenez we suggested United should sign, but with pandemic-tightened purse strings they instead opted for Edinson Cavani. And he has proven our point remains valid. While the Uruguayan busts a gut to get in the box, makes smart runs and is in place to convert some of his multiple chances, Martial still seems to spend ‘most of the time standing still’.

Martial has contributed four goals and four assists in 15 Premier League starts – a frankly pathetic return for such a frustratingly skilful individual; Cavani has six goals and two assists from eight starts in his first season in English football.

It could be Cavani, or Erling Haaland, or even Harry Kane, who leads United to Premier League glory next season. It will not be Anthony Martial.

Mateo Kovacic for Kai Havertz
Having been voted by the fans as Chelsea’s player of the season last term, Kovacic started just seven of the opening 16 games of this Premier League campaign and was hooked at half-time on two of those occasions – the 3-3 draw against West Brom and the 3-1 defeat to Arsenal.

Frank Lampard had lost faith in the shining light of the season before, preferring his off-the-pace coronavirus-addled £72million summer signing to play in his stead.

Kovacic has started every Premier League game since Thomas Tuchel took charge and looks back to his press-breaking, tempo-controlling best alongside Jorginho in a double pivot that undoubtedly suits him. While the expectation remains that N’Golo Kante will force his way back into the team – most likely for Jorginho – with a ludicrous number of options for the two attacking midfield slots in the current set-up, Havertz has a fight on his hands.

John Stones for Aymeric Laporte
It felt like John Stones was closer to the Manchester City exit than a place in the first team in the summer. After just 12 starts in the 2019-20 season, City spent £100million on Ruben Dias and Nathan Ake.

With Aymeric Laporte an absolute must in the heart of defence, Stones was set to be fourth choice at best. And with wantaway Eric Garcia and 35-year-old midfielder Fernandinho often preferred to the Englishman last season, he could have been as low as sixth in the pecking order.

But drafted in following City’s 2-0 defeat to Spurs in November, Stones has formed an unbelievably solid partnership with Ruben Dias. City have won 13 of the 14 games he’s started this season, conceding three goals across all of those games. You could say he’s been the bedstone of their success… but don’t.

Fulham’s entire defence
In the first three games of the season – in which none of Antonee Robinson, Joachin Andersen and Tosin Adarabioyo featured – Fulham conceded three goals at home to Arsenal and Aston Villa and four away at Leeds. Various combinations of Tim Ream, Michael Hector and Denis Odoi were not cutting it.

Since the new trio have been in the first team, Fuham have conceded three on just one further occasion – in the 3-2 defeat to Everton – and have let in 18 goals in 18 games. The fact that they haven’t scored more than two goals in a game in that period is the reason for their continuing strife rather than what originally threatened to be their downfall.

Will they regret not having that defence in place from the start of the season? Probably.