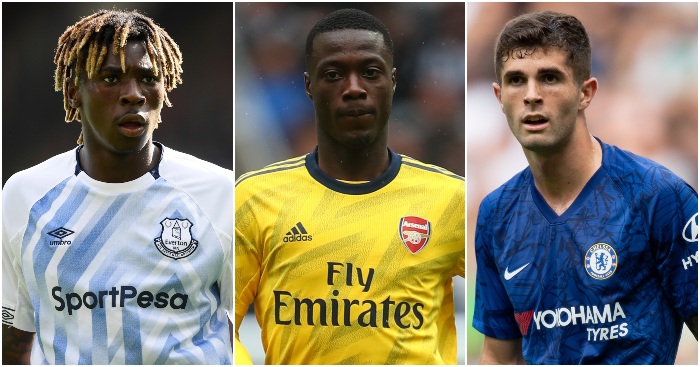 Christian Pulisic (Chelsea)
The USA star faces a near-impossible task in filling Eden Hazard’s boots but judging from early glimpses, Pulisic appears determined to give it his best shot. Indeed, Tony Cascarino reckons the 20-year-old is capable of hotting Hazard’s heights: “I don’t remember a young Eden Hazard being as quick and direct and there’s no reason Pulisic can’t develop into a player of Hazard’s standing.”

That reference was offered in the wake of a first competitive start for Chelsea in the Super Cup final defeat to Liverpool when Pulisic suggested that he is already two-thirds of a Hazard. His performance in Istanbul where he teed up Olivier Giroud for Chelsea’s opener suggested that it might be a while before he again sees the bench, where he spent most of his Premier League bow. Given the paucity of options open to Frank Lampard, Chelsea should already be building their attack around Pulisic, not easing him gently into it.

This is an absolutely phenomenal assist from Pulisic and it’s why I think he could be a number 10. pic.twitter.com/Ffb2WrXCA8

Nicolas Pepe (Arsenal)
Unai Emery’s defence might still be a bit shonky but it won’t matter quite so much should his attack fulfil their potential to rival any in the Premier League. Alexandre Lacazette and Pierre-Emerick Aubameyang papered over plenty of the cracks running throughout the rest of the Arsenal squad last season but with Nicolas Pepe champing at the bit to join them in a front three, the Gunners boss need not waste any time in blooding his record signing.

A visit from Burnley in Arsenal’s first home game of the season seems like the perfect opportunity for Emery to get gung-ho with his strike force. The manager was coy when asked about his immediate plans for Pepe and his fellow new recruits, but one has to hope that the teasing is over come Saturday lunchtime. Pepe, Lacazette and Aubameyang all fit snugly into either a 4-3-3 or 4-2-3-1 depending on how Emery wants his side to line up in the face of different opposition, and there seems little need to bed in the new boy given the lack of alternatives in wide positions.

Nicolas Pépé is already fitting in quite well with his Arsenal teammates 😎 (via @Arsenal) pic.twitter.com/trUNY6h6uD

Moise Kean (Everton)
Marco Silva has a choice to make over his headline summer recruit. Does the Everton manager through the 19-year-old straight into the hustle and bustle of the Premier League, or should he continue with last weekend’s approach of employing the £29million as an impact player?

Go for it, Marco. Who else is there? The Toffees created plenty of chances in their 0-0 draw at Crystal Palace last weekend and Kean has been bought from Juventus to apply the finishing touch that Everton have lacked for far too long. The teenager might not have the same fitness work banked from a full pre-season that his team-mates enjoyed, but Everton supporters turning up to Goodison Park for the visit of Watford this weekend will be hoping that Silva uses Kean as a statement of intent against a Hornets’ defence that crumbled in the face of Brighton last week. From a neutral’s perspective, let’s hope Javi Gracia is similarly brave with Ismaila Sarr on Saturday.

Daniel James (Manchester United)
You would have to be a special kind of b*stard not to feel any goodwill towards the Manchester United new boy last week when he added the flourish to the Red Devils’ win over Chelsea by scoring on his Premier League debut. Coming on his first competitive appearance since joining the club and the start of the first season following his father’s death just before he signed for United, a deflected finish was the highlight for most of the home supporters on an afternoon that went better than many probably expected.

A 16-minute cameo on the back of some impressive performances in pre-season was enough to offer some resemblances to Steve Coppell. James has plenty more to do to become a regular, let alone sit in such esteemed United company, but the 21-year-old’s qualities as an old-school wideman have provoked plenty of excitement from supporters keen to see what he could do in a front three having become tired of watching the likes of Jesse Lingard and Alexis Sanchez spend most of their time on the wing trying desperately to seek a way inside.

Safe to say Daniel James enjoyed that one 🙌

Giovani Lo Celso (Tottenham)
The Spurs new boy watched last weekend’s win over Aston Villa from the plush seats in the Tottenham Hotspur Stadium directors box having only arrived from Real Betis 48 hours previously. For more than an hour, Spurs lacked the type of guile that Lo Celso has been signed to provide until Christian Eriksen arrived to provide the Argentina star with a helpful guide of how to play between the lines in the Premier League.

It is unlikely that Eriksen will be kept on the bench this weekend and equally unlikely that Lo Celso will be chucked in at the deep end against Manchester City this weekend. Which is a shame – Pep Guardiola and Pochettino have become extremely familiar with each other and the City boss has surprised his Spurs counterpart with team selections on more than one occasion. Seeing Guardiola force fed a dose of his own medicine this weekend when Pochettino takes Spurs to the Etihad for the third time in their last 11 competitive matches would be a fascinating sight for any neutrals tuning in on Saturday evening. Picking Lo Celso would also give Pochettino the chance to make a forceful point to Eriksen over the continued doubts surrounding his immediate future.