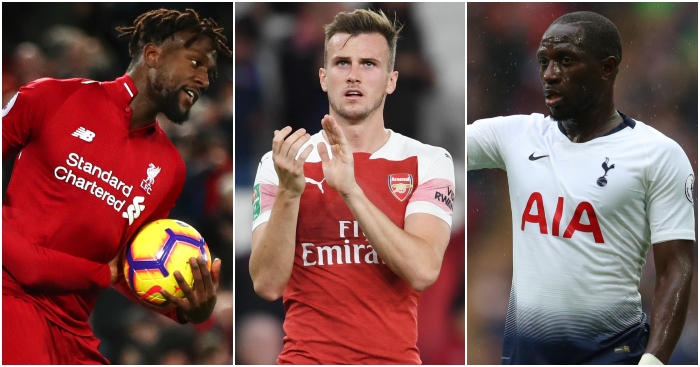 Matteo Darmian
The Italy defender has been leaving Manchester United in each of the last three windows, if the Gossip columns are to be believed. Speculation was rife in the summer that Darmian was heading back to Serie A but still he remains at Old Trafford.

It has always been somewhat puzzling why United were apparently so keen to push the 29-year-old out of the door. Darmian isn’t a defender to build a back four around and though it’s not often he rates above 7/10, he also rarely strays below 6/10 and his versatility makes him a useful squad player. The former Torino defender can do a job in all the positions across a back four and as a wing-back on either flank. Unlike many other United players, when he takes the field, you always know what you are going to get.

Darmian also gives Jose Mourinho very little grief considering he doesn’t get the playing time he would like. Playing at left wing-back against Arsenal was a third appearance of the season for a player Mourinho dubs his “emergency man”. “He is always ready for everything,” said the manager in September, which is in stark contrast to a lot of his other erratic defenders.

Robert Snodgrass
Half a season after joining West Ham from Hull for £10.2million in January 2017, Snodgrass was told he could go to Aston Villa on loan after only two assists in 15 appearances. Slaven Bilic expected more of a signing seen as the replacement for Dimitri Payet, but the Hammers hardly prospered while Snodgrass was rebuilding his confidence at Villa Park.

The Irons are now reaping the benefits of Bilic’s decision to exile the Scotland winger. Snodgrass was linked with a return to Villa and Steve Bruce was extremely keen to make it happen, but Snodgrass opted to give it another go at the London Stadium. Manuel Pellegrini is bloody glad he did.

Despite nine new arrivals in the summer, Snodgrass has emerged as one of the Hammers’ most impressive performers of late. Even Mourinho has been impressed.

While Pellegrini has been considering a deal for Samir Nasri, who hasn’t played football for a year, in an attempt to solve a lack of creativity from the left, Snodgrass has weighed in with three assists in the last two games, having started the last six games for which he has been available.

Divock Origi
“That’s football, sometimes things change in a second in the wrong direction, and sometimes in the right direction. It was such an important thing and so nice.” That was Jurgen Klopp’s rather more considered response compared to his immediate reaction to Divock Origi’s last-gasp derby winner against Everton.

Origi certainly needed a change of direction because the only way he was heading was towards the exit. Having spent last season at Wolfsburg, it seemed he would be off in the summer with Turkish clubs interested, as they generally are in Liverpool’s cast-offs, while Wolves had an offer of around £20million accepted, but the striker didn’t fancy Molineux.

Klopp and the Kop were grateful on Sunday for Origi’s refusal to go, even if it was beginning to look like the 23-year-old had made the wrong decision. Prior to his 84th-minute introduction on Sunday, the closest Origi had got to a Premier League pitch was the bench, and it took until the end of October for Klopp to give him a seat there. His unlikely intervention led to a start at Burnley and far rosier immediate prospects for the Belgian forward.

Moussa Sissoko
The Spurs midfielder was another star linked with Turkish clubs in the summer but Fenerbahce issued an official statement to distance themselves from a player widely regarded as a £30million flop.

Sissoko earned that tag following two ropey seasons since moving from Newcastle after starring for France during Euro 2016. A couple of years later and the 29-year-old wasn’t in Les Bleus’ squad for the World Cup and it seemed Tottenham were more than happy to ship Sissoko off to anyone daft enough to pay for him.

So you can understand Spurs fans’ befuddlement at the midfielder’s nomination for November’s Premier League Player of the Month award. Not that it wasn’t deserved. Sissoko played 90 minutes in four games out of five during a perfect month for Spurs and though he doesn’t contribute a great deal in defensive or attacking thirds, he has made the middle his own.

Rob Holding
“Over the off season, with my dad and my agent, we were thinking should I go out on loan and hopefully get some game time.” West Ham and Burnley were among the clubs supposedly willing to offer the Arsenal defender some action. Then Arsene Wenger left.

Holding thought he’d stick around during pre-season in an attempt to catch the new manager’s eye and, to some extent, it worked. The centre-back was kept in reserve for the first five matches of the Premier League season but when Sokratis’ injury offered Holding a chance, he grabbed it with both hands.

Prior to the trip to Man United, he had not missed a single Premier League minute since late-September. The 23-yer-old has also played all but the last half-hour of Arsenal’s Europa League campaign – substituted early against Vorskla only because Unai Emery wanted him fresh for the north London derby. The fact he sustained what could be a ‘big injury’ at Old Trafford comes as a far bigger blow to Arsenal that it might have at any other point during his Gunners career.