Following a dream debut for Liam Delap, we pondered players who became better than their dad. 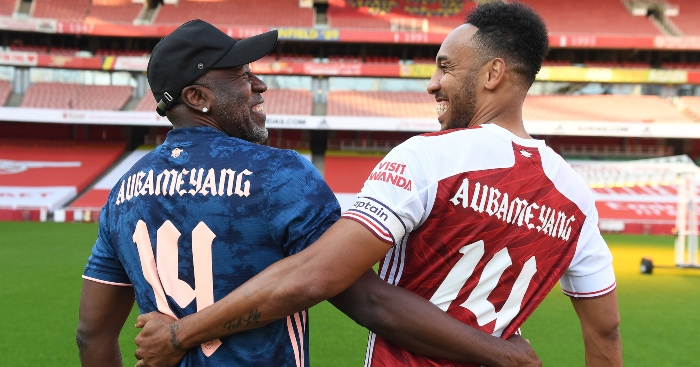 Following a dream debut on Thursday night for Liam Delap, son of football’s longest thrower Rory, we started thinking about players who went on to be better than their dad…

Not sure if you’ve heard because Liverpool fans don’t like to talk about it, but they signed Thiago last week. The lad can play and, amazingly, he can talk too.

He obviously comes from good stock. Indeed, Thiago’s father, Lomar do Nascimento – Mazinho to his mates –  played for Brazil and was part of the squad that won the 1994 World Cup.

Indeed, Mazinho featured heavily in one of the enduring images from that tournament. After Bebeto netted in the quarter-final against Holland, he was joined by Mazinho and Romario by the corner flag to rock the cradle in tribute to the scorer’s newborn son, who also went on to be a footballer.

Mazinho played 35 times for Brazil during a career in which he represented Vasco da Gama, Lecce, Fiorentina, Palmeiras, Valencia and Celta Vigo. He briefly coached Greek side Aris while Thiago and his brother, Barcelona’s Rafinha, were making their own way in the game. Rafinha opted to represent Brazil, while Thiago chose Spain: “I have lived and grown up here,” he said when asked to explain his decision.

Thiago’s old man can point to the World Cup winner’s medal on his mantelpiece but the Liverpool midfielder can counter with nine domestic titles with Barca and Bayern Munich as well as a couple of Champions League medals.

A few shouts for this iconic Bebeto celebration from USA 94.

The Borussia Dortmund striker has never shied away from the fact his dad used to play a bit. At least, he did until Roy Keane caught up with him.

That’s the myth anyway. Alf Inge Haaland actually had his career ended by a knee problem which pre-dates Keane’s retribution but whatever the cause, the Norway midfielder was forced into early retirement, which gave him more time to groom his lad into the hitman he is today.

Unlike some sons of former players, Haaland is happy to openly embrace his heritage. Indeed, he uses it as motivation. In 2017, he said: “The goal is to become a better player than my dad was. I hope to get more caps than he did.”

He’s only 30 caps short of his father, but Graeme Souness told Virgin Media of his suspicions that Haaland inherited his innate eye for goal from his mother: “His mum must have been a good player because his dad was a plodder!”

Erling Braut Håland said this week he still doesn't think he's as good as his Dad was.

The Arsenal striker has 63 caps for Gabon – but he’s still 17 short of his father.

Pierre Aubameyang made 80 international appearances during a career as a midfielder spent mostly in France. The majority of his appearances came at Le Havre and Laval, where the family was living when Pierre-Emerick was born in 1989.

Despite father and son collecting more than 140 caps between them, the family’s relationship with the Gabon authorities has been fractious, to put it nicely. In 2018, Pierre-Emerick had to deny claims from Gabon’s Football Federation that his dad had been made joint coach of the national team alongside former Rangers and Hull striker Daniel Cousin.

“You announce to the whole world that my father is going to be national team coach – you don’t even have his agreement,” he said.

“The president of the federation called my father and didn’t even ask about his health – even though he is sick at the moment. Just going ahead and giving a press conference even though my dad had said he would be giving an answer the next day – which was going to be ‘no’ by the way.

“The day the federation stops being amateurish maybe the national team will be able to progress and once against earn some good results. You ask yourselves why I have problems with you? Why I don’t want to come and play for the national team? Well you have just shown why once more.”

The Barcelona midfielder’s dad guarded goal at the Nou Camp, predominantly as a back-up to the likes of Andoni Zubizarreta and Vitor Baia between 1990 and 1999.

But Busquets Sr had a brief spell as No.1 around the mid-1990s and a spell in the spotlight in 1991 when he stood in for Zubizarreta when the Barca legend was injured for the European Cup Winners’ Cup final against Manchester United in Rotterdam.

Not quite three years old, little Sergio will have seen Mark Hughes skip past his AWOL (from his goalline, not his children) Dad before tw*tting United into a 2-0 lead.

Jack may have an England cap, but his dad had football’s finest beard. That’s a tough call…

Cork Jr has certainly made a decent fist of following in his father’s footsteps. Alan Cork played mostly for Wimbledon during the Crazy Gang era before a couple of seasons at Sheffield United. He holds the record for first-team appearances and first-team goals at Wimbledon and is the only player to have scored in all four divisions of the pre-1992 Football League and the Premier League.

Jack started at Chelsea and though he never broke into the first team at Stamford Bridge, he represented every England youth team on the way to achieving a single senior cap as well as an appearance at the 2012 Olympics with Great Britain.

Hearing about Meireles' beard but I doubt it beats that of Alan Cork, the oldest-looking footballer in the universe: pic.twitter.com/KLZ4GDby0y