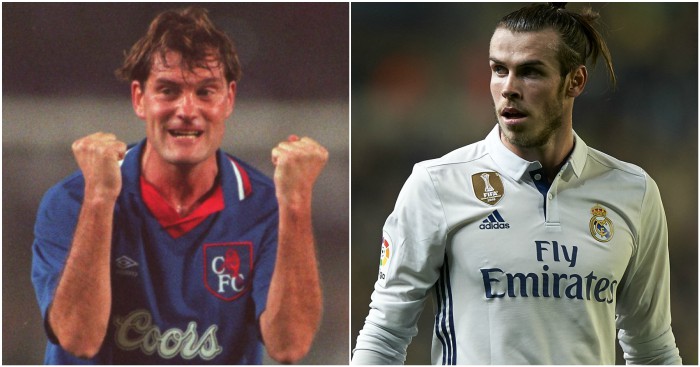 Gareth Southgate believes £47.5million centre-half John Stones could be a success in midfield. He can take inspiration from this adaptable bunch…

Glenn Hoddle
The former England boss was a divisive figure in management and a derisive one in punditry, but almost everyone agreed Hoddle was a wizard as a player. It is doubtful, though, that English football, at a time when midfield battles were won with graft and guts, was ready for Hoddle’s brand of magic. Upon returning from France in 1991, Hoddle moved himself into a deeper role – the deepest role – to help Swindon initially, then Chelsea.

Few managers would have had the courage to do that, so it helped that Hoddle was his own boss. After taking over at Swindon in April 1991 and rescuing them from relegation, the then-33-year-old built a back five around himself as sweeper, a move which helped Swindon achieve promotion to the Premier League in 1993 via the play-offs, with Hoddle scoring the Robins’ opener in the final.

Hoddle didn’t stick around at the County Ground, instead taking up Chelsea’s offer to be their player-manager. The new boss implemented the same ideas at Stamford Bridge, and though their league positions (14th, 11th and 11th) suggest his reign was hardly a raging success, Hoddle is credited with laying the foundations for Chelsea’s eventual transformation into the behemoth they are now.

Upon retiring as a player in 1995, Hoddle tempted Ruud Gullit to England and gave him the opportunity to drop deeper too, back into the position he had favoured before joining AC Milan. Gullit was a huge hit as a sweeper, with Hoddle remarking after one exhibition: “It was like watching an 18-year-old play among 12-year-olds.”

Javier Mascherano
The Argentina ace made a similar journey to Hoddle from midfield to centre-half, though that is where the parallels end. As midfielders, the pair couldn’t be more different – Hoddle was the creator, Mascherano the destroyer.

Despite offering different traits to Sergio Busquets, Andres Iniesta and Xavi, the ex-West Ham and Liverpool workhorse accepted early in his Barcelona career that there was little chance of breaking up the triumvirate. But there was an opening at the back, and Mascherano pinpoints a late Champions League tie-saving challenge on Nicklas Bendtner in 2011 as the moment everything changed.

“That tackle marked a before and after,” he told The Guardian last year. “From then on, I played at centre-back: that tackle changed everything. I found my position and I’ve been there all these years, trying to keep my place and keep this level.”

Alan Smith
The former Leeds striker scored six goals in his first season after crossing the Pennines to join Manchester United. But Sir Alex Ferguson, who was facing the prospect of having to replace Roy Keane in the not-too-distant future, had a plan for Smith. “Roy sees characteristics in Alan that he saw in himself as a young player, which could help Alan develop into a very good player in that position,” uttered the Scot.

Smith was robbed of the chance to establish himself as a midfield force at United by a career-threatening leg break during his second season. But 11 years later, Smith is still playing at Notts County, and the former England striker believes his positional switch benefited him.

“It helped me,” Smith told FourFourTwo. “More so after my injury, which took 10-15 per cent of my capabilities away. If you lose two or three per cent at the top you’ll struggle. I had to re-invent myself as a player; be a bit more reserved and learn the game again so that I knew how to play a position properly.”

Gareth Bale
The Welshman’s ascent from figure of fun to the world’s most expensive player is one of the more inspirational stories in the modern game. As a left-back playing second fiddle to Benoit Assou-Ekotto, Bale was almost offloaded to any of Birmingham, Nottingham Forest or Middlesbrough, with Stephen Hunt once suggesting Spurs were willing to use the youngster in a part-exchange deal for the then-Reading winger.

With Bale refusing to budge, Harry Redknapp opted to try the 20-year-old in a more advanced position and the ex-manager has been claiming credit for Bale’s almost instant transformation ever since, despite evidence to the contrary. As a winger, Bale tore up the Premier League before earning himself an £86million move to Real Madrid in 2013 to play alongside the player he had modelled his game on: Cristiano Ronaldo.

After settling at the Bernabeu in Ronaldo’s shadow, Bale began to eye a more central role. Rather than approach Carlo Ancelotti, Bale and his agent went straight to the president behind the coach’s back. Ancelotti refused to be dictated to but after the Italian was sacked and replaced by Rafa Benitez, Bale got his wish, temporarily at least.

Antonio Valencia
The Manchester United lynchpin made the opposite journey to Bale, but his transformation has been almost as remarkable.

Valencia enjoyed a productive spell as a right winger after joining from Wigan in 2009 to replace Ronaldo but a particularly poor season in 2012-13 while wearing the No.7 jersey appeared to signal that his days at Old Trafford may be numbered. Sir Alex Ferguson had spotted Valencia’s potential as a full-back but it was under Louis van Gaal that the transformation from winger without a trick to rock-solid right-back really gathered pace.

Now, under Jose Mourinho, Valencia is one of the first names on the United team-sheet, with the full-back captaining the Red Devils during the Europa League final. Ander Herrera labelled his team-mate “the best right-back in the world, maybe with Dani Alves,” and Mourinho loves him: “I just think he is the best right-back you can have. There is no better right-back in football… It is a privilege for us to have such a good player and such a good man.”