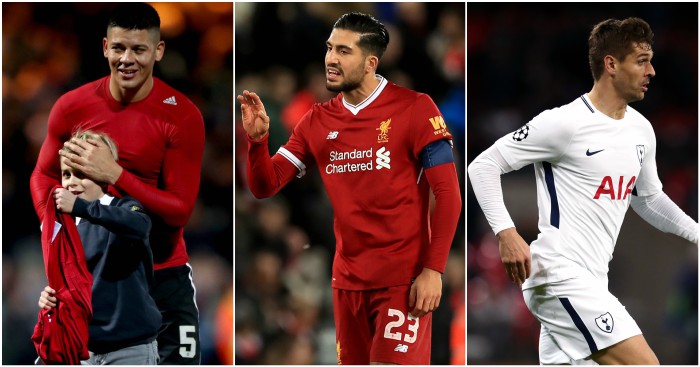 Marcos Rojo (Manchester United)
Rojo is a centre-back who retains a lot of goodwill with Jose Mourinho. He is ultra-committed with a side of snide, the perfect Mourinho defender. And yet even his manager must be disconcerted at how unreliable Rojo remains, the walking, talking yellow card.

Having only returned two months ago from an anterior cruciate ligament injury, Rojo might still be finding his way back into his stride. But Manchester United’s first team is no place for tentative steps. Rojo was given a torrid time by Sam Surridge, a 19-year-old on loan from Bournemouth. That hardly bodes well for the Premier League.

With Phil Jones, Eric Bailly, Chris Smalling, Daley Blind and Victor Lindelof all as competition in central defence, Mourinho will have no time for taking risks with a player struggling for form. Are we entering the final months of Rojo’s United career?

Arthur Masuaku (West Ham)
I largely agree with the point that you’d rather be spat at (which wipes off easily) than have your ankle or nose broken by a late tackle or stray elbow. I’m sure most reasonable people would agree with that sentiment.

Yet that hardly makes spitting at an opponent any more acceptable. It is a disgusting, dirty thing to do and an extended ban is justified. Players know the rules, and such an extreme loss of temper merits censure.

Masuaku made the PR move of having an apology posted on the official West Ham website, saying he had let down “team-mates, the manager, coaches, board and the fans”, insisting that it was out of character and admitting that West Ham’s coaches had put a lot of faith in him.

Those were the right words, and everyone deserves a second chance. Yet Masuaku will know that his extended absence comes at the worst possible time for West Ham and David Moyes. His manager’s post-game anger at Masuaku’s actions demonstrates that it will take more than an apologetic statement to win back his place.

Emre Can (Liverpool)
We have known for some time that Can is intent on leaving Liverpool, but it was still a surprise to hear Jurgen Klopp’s honesty over the issue of a player running down his contract to move on a free transfer and thus command a higher salary.

“He’ll stay beyond the winter,” Klopp told DAZN . “Emre is still a young lad but he has developed into a great player and is very important for us. Sometimes a player just wants to sit out his contract. That’s not cool for the club, but there are moments in which you have to accept it. And as long as the player behaves like Emre does, then I have absolutely nothing to complain about. He gives everything he has and identifies with the club.”

He might well give his all, but there will be increased scrutiny of Can’s place in Liverpool’s team now everybody knows he is not fully committed to the cause beyond this season. Liverpool supporters can be an unhappy bunch when a first-team player deigns to move on.

It hardly started well. Can was wretched against West Brom on Saturday, named captain for the game. He has a habit of playing a little like Jonjo Shelvey in panic mode, tearing around and trying to be involved in every tackle in order to impress but only succeeding in being caught out of position by two or three well-placed passes.

Nobody can play excellently every week, but Can must expect his performances and personality between now and May to be subject to greater inspection. As Alexis Sanchez can tell him, that is the lot of a want away first-team player.

Fernando Llorente (Tottenham)
A Plan B who not only offers little impact when called upon as a replacement for the Plan A but actively makes the Plan A worse when they play together. Llorente is neither use nor ornament at Tottenham.

That’s not to say that Llorente deserves significant blame. After Roberto Soldado and Vincent Janssen, he is the third striker to find the task of being Harry Kane’s back-up impossible simply because it is so difficult to replicate what Kane does.

That problem is exacerbated by Kane’s demands to play in every fixture, and his seemingly inexhaustible energy levels. Any striker must be immediately able to play in third or fourth gear despite spending most of his time twiddling his thumbs.

If the target man Plan B is not going to work, Lucas Moura’s arrival might at least offer a different option. He will play wide, allowing Heung-Min Son to be the central striker Plan B just off Kane or in his place. Which might mean curtains for Llorente.

Renato Sanches (Swansea City)
If Sanches thought that the sacking of Paul Clement might have done for his chances at Swansea City, he will have been pleased to see fellow countryman Carlos Carvalhal replace him. Surely the goodwill could be retained?

So it would seem. After Sanches produced a reasonable – if not brilliant – performance against Tottenham on January 3, Carvalhal made a point of praising the 20-year-old.

“Renato, I think he was 20 years old two months ago or something,” said Carvalhal. “He is a boy, he is still improving, he is not a player who knows everything about football. He is in the process to be a better player. “We give him a clear role in the last game and in this game also.

“In the first game he didn’t start so well but in the second half he played a better level and I think after three days, just three days, he jumped to another level for this game. I believe that I am sure he will play a better level in the future because Swansea have contracted really a very good player.”

Carvalhal is right that we cannot expect consistency from Sanches, but nor too can Swansea afford wild lurches in performance level from a central midfielder given the urgency of their position in the Premier League. Sanches was desperately poor against League Two opposition on Saturday. What has happened to Euro 2016’s Young Player of the Tournament?

The other doubt about Sanches is his injury problems, and he left the field with another muscle injury against Notts County. This season goes from bad to worse.