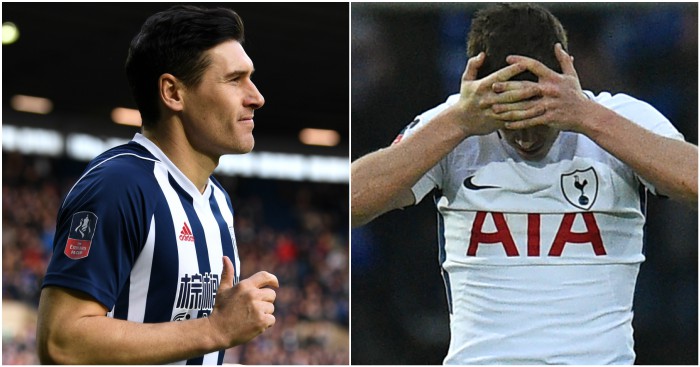 Fernando Llorente
The Spanish striker was not the only Spurs reserve who struggled at Spotland but this was the latest in a series of underwhelming displays from Harry Kane’s stand-in.

It is almost the impossible job but even forgetting comparisons with Kane, Llorente again looked a shadow of himself. The 32-year-old’s struggles are not for a lack of effort, but no goals or assists in six starts – five against lower league opposition – in Tottenham’s domestic cup campaigns this term tells its own story.

Llorente may point to a lack of match rhythm as an excuse, but he knew the deal when he swapped Swansea for Spurs in the summer. And it is not as if he has been the main man everywhere else. Prior to his season at Swansea, he was in and out of teams at Sevilla and Juventus, and though perhaps his role as back-up was not as clearly defined, he should be able to better adapt to playing after periods of inactivity.

Kevin Stewart
The former Liverpool midfielder is not the first player to struggle after making the step down from the cushy surroundings of one of the big six. But Hull are entitled to expect more than what they are getting for an initial outlay of £4million.

Coming into Nigel Adkins’ side at Chelsea on Friday night, Stewart was expected to break up play and harass the hosts, but twice in the first half he was given the brush off by Olivier Giroud, who set up Willian for goals on both occasions.

Upon leaving Liverpool for Hull, Stewart spoke of the move as a better platform to take the next step. Having played less than a third of the Championship minutes available since Adkins took over in December, the 24-year-old has it all to do to convince anyone that he can cope at his current level. As Matt Stead suggested, sending Stewart to Hull for £4m – with almost the same amount due in performance-related add-ons – while taking Andrew Robertson for £8m might be the best bit of business Liverpool have done in recent years.

Tammy Abraham
The Swansea striker may have been keen to impress Gareth Southgate as the England manager watched Swansea’s tie at Sheffield Wednesday but Abraham should be more concerned with catching the eye of Carlos Carvalhal.

The young striker started the trip to Hillsborough because he hasn’t made Carvalhal’s XI in the Premier League since the manager’s first match in charge. On that occasion he was hooked before the hour mark, after which Swansea went on to turn around a deficit to begin their climb away from the foot of the table. Since then, aside from 16 minutes against Burnley, he has been restricted to FA Cup duty. On Saturday’s evidence, the only thing that could keep him in the side is the injury to Wilfried Bony.

It wasn’t supposed to be like this for Abraham. After a prolific season at Bristol City last term, this was intended to be the centre-forward’s breakout year in the top flight. Four goals in his first eight games made for an encouraging start, so much so that Southgate gave the Chelsea loanee his first England cap against Germany in November. It was at least one step too far and the Three Lions boss will surely have written off the 20-year-old for this summer’s World Cup. More worryingly, his club manager will be similarly reluctant to offer many more imminent opportunities.

Gareth Barry
Barry and Jonny Evans were made to face the music after their part in the shenanigans in Barcelona last week and though Evans was stripped of the captaincy – temporarily, most likely – at least the defender offered some justification for keeping his place in Alan Pardew’s side. Barry looked as lost in midfield as he might have trying to navigate Barcelona’s one-way system while chowing down on a Big Mac and fries.

If Albion were braced for a backlash from their fans, it never came. The Hawthorns crowd stayed with their side even during a timid first-half performance that saw them trail at the break.  The former England midfielder, though, was not spared when he was hooked with 18 minutes remaining. Barry, who turns 37 this week, was booed off when Pardew replaced him with Chris Brunt. This appears to be building up towards a surprisingly sad end to a record-breaking Premier League career.

Harry Winks
The Tottenham midfielder has spoken of his struggles to regain his fitness following a couple of ill-timed ankle injuries, and Winks remains off the pace if his hour at Rochdale is any indicator.

Having missed seven weeks prior to the fourth-round replay win over Newport, Winks was not named in the squad for the meetings with Arsenal and Juventus, having watched the draw at Liverpool from the bench. The 22-year-old had a point to prove but for most of his outing at Spotland, he was played at his own game, with Rochdale swarming him and Victor Wanyama in central midfield.

Winks was ineffective and dispossessed on a couple of occasions, with one of those instances leading to Dale’s opening goal. He was replaced by Erik Lamela shortly after Lucas Moura’s leveller, though perhaps the hosts’ late equaliser might benefit Winks. Without the replay, it is difficult to see where he might have got another opportunity in the coming weeks.