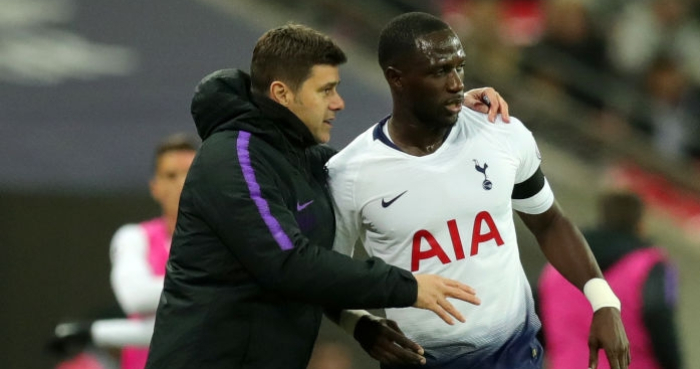 Moussa Sissoko
It has been quite the journey. From the worst signing in Tottenham’s entire history to one of Mauricio Pochettino’s most trusted lieutenants, Moussa Sissoko has experienced as many ups as he has downs in north London. Ronan Keating is looking on with envy at this rollercoaster.

‘Joke figure is slowly becoming cult hero’ was the line used to describe the Frenchman after his latest influential showing. A player who failed to have any discernible impact in his favoured position as a winger has now helped dominate the expensively assembled central midfields of Chelsea and Real Madrid over the past two seasons, slowly settling into a new role at the age of 29.

It is important to note that this is not a new development. Sissoko has lost just once in his last 22 starts for Tottenham, with only Manchester City able to nullify his unique talents over the past 12 months. Thirteen Spurs players have more minutes in all competitions this season, yet none have maximised theirs so effectively.

As easy as it would be to say no-one saw this coming, Mauricio Pochettino once again showed his immense foresight in January. He described Sissoko as “one of the most important players” in his squad at the start of the year, adding that “there is no other player in the team who can provide” such balance. Someway, somehow, Pochettino backed the right horse against all odds.

Ross Barkley
“When there is an injury to one of your best players it is not simple,” said Antonio Conte after Chelsea’s defeat in the second leg of their League Cup semi-final against Arsenal in January. “Especially when on the bench the only substitute is Ross Barkley.”

The midfielder had barely kicked a ball since his move from Everton, yet the wall was already adorned with frustrated and scribbled writing. Barkley’s Chelsea debut was as inauspicious as possible, an ineffective performance summed up by a late corner that failed to beat the first man as his side searched for a crucial equaliser.

Barkley played just twice in the Premier League for Chelsea last season; both games ended in 3-0 defeats for the Blues. Barkley was removed after 54 minutes against Bournemouth in January, and lasted 77 against Newcastle on the final day. In a World Cup year, England’s former Next Big Thing was never part of the conversation.

While Conte’s exit was inevitable, Barkley’s subsequent resurgence was anything but. Chelsea’s former manager was criticised and scrutinised throughout his final year in charge, yet his treatment of a struggling midfielder was never the issue. He never held Barkley back, and his successor would find similar difficulty in breaking the self-imposed shackles.

Maurizio Sarri has somehow solved the conundrum, coaching and coaxing instead of lauding and dawdling. Chelsea have scored 16 goals and conceded six in 515 Premier League minutes with Barkley on the pitch, scoring 12 goals and conceding five in 665 minutes without him. The forgotten man is providing a timely reminder of his abilities.

Michael Keane
It should come as little surprise that Sam Allardyce reportedly felt Michael Keane was ‘not up to it mentally’ at Everton. Often the first card played by an outmoded and outdated manager to explain the under-performance of certain squad members, it tends to be a painful misdiagnosis of the actual problem. A crisis of confidence is not a weakness that needs to be stamped out, nor a frailty that has to be tested.

Considering Keane’s first season at Everton, it would have taken the strongest of characters to prevent doubt from creeping in. He made 30 Premier League appearances: eight under Ronald Koeman, three for David Unsworth and 19 under Allardyce. And there is a snapshot of the potential problem. Throw Nigel Pearson and Sean Dyche into the mix, and each of the most important managers in Keane’s development were centre-halves in their own playing careers, each insistent that their way was the only way. Too many cooks spoiled a potentially delicious broth.

Marco Silva’s appointment was expected to see Everton sacrifice any defensive solidity in favour of attacking vibrance. Yet only the top four have conceded fewer goals (15), and only Chelsea, Liverpool and Manchester City have allowed fewer shots. Keane thrived when asked to concentrate on defending at Burnley, and when partnered with Kurt Zouma or Yerry Mina instead of Ashley Williams or Phil Jagielka, history is finally repeating itself.

Wayne Hennessey
Wayne Hennessey had to wait 16 months for his first Premier League clean sheet at Crystal Palace. The Welshman made just four appearances in that time, such was his inability to find a way to dislodge Julian Speroni.

Signed in a January 2014 transfer deadline-day splurge by Tony Pulis alongside Scott Dann, Jason Puncheon, Joe Ledley and Tom Ince, Hennessey’s purchase was the most bizarre of that particular five. He had failed to hold down a place with Championship side Wolves, and had spent half of the season on loan at Yeovil. A player tainted by previous Premier League relegation was surely not fit for a similar survival battle.

Rather suitably, Hennessey struggled to keep a convincing grip on a starting spot at Selhurst Park even as Speroni’s advancing years started to count against him. He briefly lost his place to Steve Mandanda in 2016, then again to Speroni a year later, but eventually reclaimed his crown both times. He stayed atop the Palace mountain due more to the failures of his potential replacements than his own excellence.

Yet the same cannot be said for this season, when he has finally established himself as a consistently reliable presence at the back. Roy Hodgson finally signed a successor worth his goalkeeping salt in Vicente Guaita in the summer, but that has only forced Hennessey to properly step up his game. His 69.1% save percentage is higher than that of both Kepa (69% lol) and David de Gea (67.7%), while only three keepers have kept more than his four clean sheets.

Paul Dummett
“I haven’t had that sort of thing before. It’s taken a long time. It was strange when I heard it. I was buzzing. I just need to keep putting performances in, so they keep doing it and sing it louder. It was weird. Normally people shout, ‘Dummett, you’re shite.'”

It took 18 long years, but Paul Dummett finally realised his childhood ambitions in March. A player who joined the club at the age of just eight finally had his name chanted at St James’ Park, a 26-year-old briefly stopped in his tracks by a long-awaited moment of appreciation.

“If the club had bought me for £8 million it might have been different,” said a left-back whose relationship with the fans has only recently become one based on mutual respect. “When you’ve come through the academy and cost nothing maybe they assume you’re no good. And if the team is struggling, you’re associated with it more as a local lad.”

Dummett has not only struggled to earn the respect of the fans. He once told The Times that, upon his return from a loan spell with St Mirren in 2013, he was offered a new deal with a caveat: “Pardew told me he was giving me another one-year contract but said, ‘I don’t think you’ve what it takes to play in my team.'”

Five years on, Dummett is the player Newcastle cannot afford to lose, and Pardew’s own eight-year contract has two years left to run, a full four years after the Magpies sacked him.