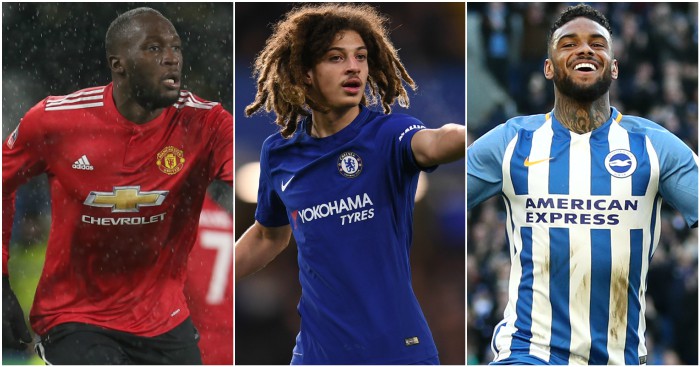 Lucas Moura
On his first Tottenham start – indeed his first since May 20 last year – Moura showed absolutely no signs of rustiness and offered no hint that he will need time to adjust to English football.

From the right in the first half at Spotland, the Brazilian was equally comfortable coming off the flank or darting down the outside, appearing more at home in Mauricio Pochettino’s side than some of his team-mates who had just as much to prove. Moving to the left after half-time, the 25-year-old spent more time coming inside, from where he notched his first Spurs goal and an important equaliser.

Most encouraging for Spurs fans, who were no doubt already well aware of Moura’s speed and technique, was the new boy’s physical sharpness and application. The 25-year-old was willing and able to do the dirty work at Spotland and is evidently ready to contribute immediately as Spurs’ season approaches a crucial phase.

Riyad Mahrez
A break – albeit unsanctioned – seems to have done the Leicester winger the world of good if his display against Sheffield United is anything to go by. Mahrez may want to leave the King Power Stadium but it appears to have sunk in that the only way the big clubs will come knocking again is if displays consistent form between now and the end of the season.

Perhaps Mahrez was encouraged by the cheers his name received when it was read out to the crowd before kick-off. Between that and the standing ovation he was afforded when he was substituted in added time, the Algerian provided his usual mix of penetration and panache, and when the Foxes needed a match-winner, it was he who provided the pass for Jamie Vardy to apply the finish.

Leicester appear willing to be the bigger party, showering the winger with love, hiding whatever resentment they may be harbouring sbout his one-man strike. It is in everyone’s interest to get along between now and the end of the season and the signs suggest all sides are willing to leave the events of recent weeks in the past. For now.

Ethan Ampadu
“No player made more tackles (4), clearances (4) or interceptions (3) against Hull, no player blocked more shots (1), and he did not commit a single foul. He completed each of his 30 passes, and has misplaced just seven of 179 in his last five games.”

But, as Matt Stead suggested, the stats don’t tell the whole story. And the most impressive number is the defender’s age: 17.

Again, rather than a rookie, Ampadu looked like a leader with at least a decade’s worth of first-team experience behind him. Playing almost as a sweeper, guiding Gary Cahill and Antonio Rudiger ahead of him, the former Exeter starlet appeared equally at home surrounded by full internationals as he did in the Under-23s at Lincoln in the Checkatrade Trophy.

Chelsea get plenty of stick for not giving youth a chance but only occasionally does a youngster come through who appears ready-made for the first-team. Ampadu seems to be that rare talent and Antonio Conte, who whoever is in charge next season, has to find a way to keep giving the teenager the minutes he needs and deserves.

Romelu Lukaku
It perhaps comes as no big deal to the centre-forward that his opener at Huddersfield represented his 20th goal of the season, making it four consecutive seasons in which the Belgian has achieved the landmark. But a striker is judged by his goals and while many have questioned other facets of his game, at least Lukaku can point to the fact that he is delivering those.

And Lukaku, as he keeps telling us, does appear to be developing and improving his all-round game. He was arguably United’s most productive threat during the dismal defeat at Newcastle and as well as applying a couple of finishing touches at the John Smith’s Stadium on Saturday night, his contribution outside the box was as laudable as what he achieved inside.

Now to bigger occasions, namely Sevilla on Wednesday and Chelsea next weekend. These are the occasions on which Lukaku will be judged having previously struggled to shine. Huddersfield has to serve as the warm-up for greater challenges and tougher questions ahead.

Jurgen Locadia
Brighton’s record signing scored on his delayed debut for club, helping the Seagulls see off Coventry to reach the quarter-finals. With Leonardo Ulloa also on target, the real winner is Chris Hughton, who has his side in the best shape they have been all season ahead of a crucial phase in their battle for survival.

Locadia scored only 15 minutes into his first start but his all-round play offered plenty of encouragement. Indeed, Hughton suggested he had been pleasently surprised: “When you bring a player you have watched him and know the type of player he is but sometimes a player comes in and does things a little bit different to what you thought or he is better at something that you thought.”

With cup progression secured, focus switches back – if it was ever taken away – to league matters, with Swansea at the AmEx this weekend. After that, they face top-half opposition in the following four fixtures, including the cup quarter-final at Man Utd. With Locadia and Ulloa among the goals, in addition to Glenn Murray, the Seagulls look as well placed to earn their first win against a top ten team as at any point during their debut season in the Premier League.