Home Arsenal Five players who make us wonder: what do they do? 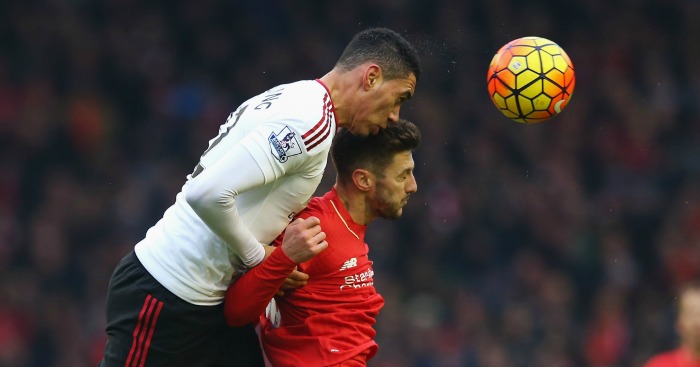 Marouane Fellaini
There is something rather poetic about Marouane Fellaini’s Manchester United spell. The Belgian bridges the gap between two eras at the club: the failure of David Moyes, and the struggles under Louis van Gaal. No one player epitomises post-Sir Alex Ferguson Manchester United quite like the 28-year-old. Moyes loved him, signing him for £27.5million in the summer of 2013, and so does Van Gaal, under whom he has become what some would describe as a ‘striker’.

Fellaini is a very tall man. His strength should be obvious: heading the ball. It must therefore be the cause of huge frustration for Manchester United fans that he has lost 10 more aerial battles than he has won this season (35 to 25). He was beaten by Lucas Leiva for a header in the victory over Liverpool at Anfield on Sunday. He has scored two goals in his last 18 Premier League games, with no assists in that time-frame. His hand – or head – in Wayne Rooney’s winning goal against the Reds at the weekend points to something, but this is nowhere near the kind of tangible return we should expect from a player who has accumulated over £40million of transfer fees during his career. He makes fewer passes per game than 15 of his team-mates, while the same amount make more tackles. Seventeen make more interceptions. That only four have attempted more shots is more of an indictment on the current United than a testament to the Belgian’s effectiveness.

Alex Oxlade-Chamberlain
Alex Oxlade-Chamberlain has made 141 appearances for Arsenal, and has 24 England caps. How? When did this happen? Signed from Southampton for £12million in 2011, Oxlade-Chamberlain was once an explosive winger with blistering pace and a physical style. It’s hard to argue that he has not regressed in the subsequent five years. Oxlade-Chamberlain, still only 22, has not progressed as was predicted, and has now transitioned to a central midfield role. If there is any club at which one will find it most difficult to prosper in such a position, it’s Arsenal. He does not offer the passing range of Santi Cazorla or Jack Wilshere, nor the tenacity and battling style of Francis Coquelin or Mathieu Flamini. Aaron Ramsey is simply better, and he ain’t no Mesut Ozil. Being ahead of Tomas Rosicky and Mikel Arteta in the pecking order is not exactly something to brag about.

The England international has scored no goals and provided no assists in 19 appearances this season, of which only seven have been starts. In terms of per-game stats, he has:

Adam Lallana
Daniel Storey asked the question in his 16 conclusions on Liverpool 0-1 Manchester United: What is Adam Lallana?

While some would expect a £25million signing to have some discernible strengths, Lallana’s remains a mystery. In his last 30 Premier League games, he has scored just one goal and provided four assists. Luis Suarez has scored more goals – eight to Lallana’s five – for the club since March 2014, and the Uruguayan’s last game for the club came in May of that year. So he is no goalscorer. He makes the same amount of tackles per game as Jeremain Lens, and even his dribbling, the one characteristic with which you could truly credit the 27-year-old, is achieved at a rate which is no better than Angelo Ogbonna or Gareth Barry. He has also been substituted in half of his 14 starts; he ranks first in the ‘run around and look knackered’ per-game stakes.

In the words of Storey: ‘The bedrock of Lallana’s Liverpool career has been his ability to run down a touchline, do a Cruyff turn to stop the ball and then lay it back either to a right-back or central midfielder.’

Fernando
Under the dictionary definiton of the word ‘middling’ reads the name ‘Fernando’. Signed by Manchester City for £12million from Porto in summer 2014, the Brazilian midfielder has basically been tasked with not being Fernandinho. He has started eight Premier League games this season, including three of City’s total five defeats. A haul of no goal or assists this campaign is understandable for a defensive midfielder, but 43 players make more tackles per game, while seven team-mates make more interceptions, 11 attempt more shots, 12 make more key passes, and 11 complete more passes overall. He does not rank first for a single statistic in the Manchester City squad.

Ryan Mason
What is a Ryan Mason? An England international, apparently. The f***?

Is Mason a goalscoring midfielder? Two strikes in 40 Premier League games suggests not. Is he a passer? 11 Spurs team-mates complete more per game than the 24-year-old, while nine create more chances. He has no assists. Is he a ball-carrier? Certainly not based on the fact he makes 0.5 dribbles per game. Mauricio Pochettino has used Mason as a holding midfielder, an orthodox central midfielder and as a No 10 this season, with Mason making 10 appearances. The 24-year-old provides a window into a rather bizarre past for Spurs. He made 29 starts in central midfield last season, with Nabil Bentaleb second with 24. Etienne Capoue started 11, Moussa Dembele six, Benjamin Stambouli four and Paulinho two. What a difference a season makes.