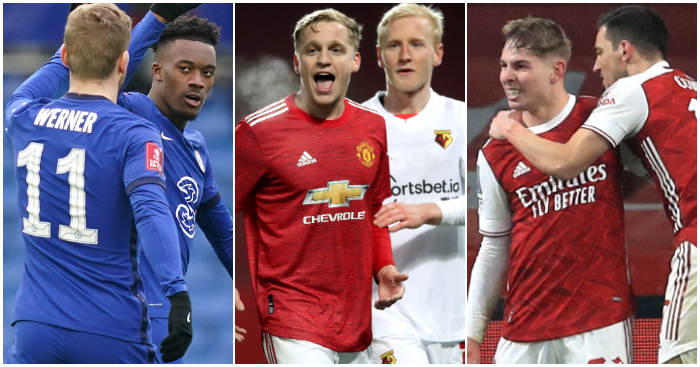 Donny van de Beek
Manchester United’s unexpected title tilt is perhaps the worst thing that could have happened for Van de Beek. With the Red Devils able to go top of the Premier League this week before visiting Liverpool on Sunday, Ole Gunnar Solskjaer will be minded to play it safe for the remainder of the Premier season.

Which means it’s back to the bench for Van de Beek until the next round of the FA Cup. And that is a shame, because the Holland midfielder deserves an opportunity to shine on stages bigger than the FA Cup or Europa League can offer in the coming weeks.

Bruno Fernandes hogs the spotlight as No.10 – no one is shifting United’s talisman from his starring role. But there is a place for Van de Beek as one of the leading man’s supporting cast.

The £40million midfielder put on a star turn against Watford as a deeper-lying playmaker alongside all-action hero Scott McTominay. It is a double act which deserves a longer run. But Solskjaer will already have Fred pencilled in to play against Burnley and Liverpool.

United’s lack of a top-class screener does Van de Beek no favours. Solskjaer should address that as a priority in the summer regardless, but the recruitment of a mobile defensive midfielder could unlock Van de Beek’s potential as well as better protecting United’s back four.

In the meantime, though, Van de Beek will shuffle back off the stage and the questions Solskjaer grew tired of weeks ago will continue.

Callum Hudson-Odoi
Frank Lampard is clearly not convinced by Hudson-Odoi. Which is hard to fathom when you consider the faith he has put in the winger’s fellow academy graduates.

Hudson-Odoi continued his habit of shining on third-round weekend by setting up the first and scoring the second in Chelsea’s 4-0 win over Morecambe. Three successive years he has been the Blues’ best performer at this stage. In the couple of previous seasons, it was a start he failed to build upon.

That was when Chelsea weren’t as spoiled for choice as they are now in attacking positions. The added competition has restricted Hudson-Odoi to just two Premier League starts this season and less than an hour in his preferred position on the left wing.

But with Timo Werner and Christian Pulisic struggling on that flank, Hudson-Odoi must be due a turn. The 20-year-old presumably thought he would get his share of opportunities when he eventually signed a long-term contract shortly after Lampard was appointed. A season and a half later, now is his time to kick on.

Carlos Vinicius
“Come on Marine, these are sh*te!” bellowed one of the non-league club’s neighbours from his back garden after Joe Hart waved Neil Kengni’s 30-yarder on to his crossbar. That, we’d love to believe, prompted Vinicius to smash in a 13-minute hat-trick in Spurs’ 5-0 win on a wholesome day when Marine, Spurs and Covid were all winners.

Vinicius was in something of a no-win situation. Anything less than a couple of goals against the eighth-tier side would have been seen as a failure. But his brace settled any Spurs jitters that may have been bubbling up after a goalless first quarter of the game on Merseyside. His third and Spurs’ fourth before the break saw the striker double his previous haul for the club in less than a quarter of an hour.

Even then, he couldn’t win.

As if Carlos Vinicius did the Mbappe arms folded celebration after scoring against a bunch of plumbers. 😂😂😂 #MARTOT #mbappe pic.twitter.com/qFaXUa7aMT

But the on-loan striker, once more, did precisely what was demanded of him by Jose Mourinho. “It is nice for him,” said the manager. “Of course, for a striker that doesn’t play a lot because in front of him is the big one – every time he has a little chance to play, like in the Europa League, he is there for us and we are very happy.”

It wouldn’t stop the sheer panic that would engulf White Hart Lane should Harry Kane again be struck down by injury, but Vinicius can only take his chances when they come, even if they are against the likes of Ludogorets and a bin man.

Oliver Burke
For the first time this season, Sheffield United won a game of football. Okay, it was a scratchy victory over a side 18th in League One, but a win’s a win and the Blades are in no position to be sniffy.

Few did more than Burke to help Chris Wilder finally achieve his 100th win as United boss. The Scotland winger wasn’t introduced until after half-time, with Wilder understandably going strong in search of that elusive winning feeling.

Burke began by missing a sitter but he atoned within moments by racing through to score United’s second goal – his first for the club – in a 3-2 triumph. He then hit the post as the Blades showed some refreshing resilience to immediately regain the lead having chucked it away within three minutes of Burke’s strike.

This has to be a platform for Wilder’s side. The next step is for Burke and the Blades to arrest his ongoing record run of winless games at the start of his Premier League career. The winger has not tasted victory in any of his first 25 top-flight appearances, with his last action – the defeat at Burnley – seeing him surpass Gareth Bale’s unwanted benchmark.

F365 Says: No headache for Arteta as Arsenal stand-ins flounder

Emile Smith Rowe
The Arsenal youngster made the most not only of his opportunity to play off the bench, but also the reprieve from a red card he was given in added time of Arsenal’s eventual win over Newcastle.

Smith Rowe began the evening on the bench as Arteta sought to rest him – which would have been an extraordinary measure to suggest just over a fortnight ago when he had yet to feature at all in the Premier League prior to the 3-1 win over Chelsea. But since that triumph which kickstarted Arsenal’s season, Smith Rowe has been pivotal in the subsequent run which has lifted the gloom at the Emirates.

He and Saka were called for in the second half while their more high-profile, senior stand-ins toiled in the face of Newcastle’s dogged resistance. At least Nicolas Pepe ‘tried’ while Willian, in particular, was awful and his struggle in the No.10 role highlighted how much Arsenal have come to rely on Smith Rowe already.

Had his red card not been overturned, the consequences would have been felt way beyond the extra-time period. Smith Rowe would have sat out Premier League matches against Palace, Newcastle and Southampton to leave Alexandre Lacazette looking towards Saka as his sole supply.

But Lacazette, who followed Smith Rowe off the bench, need not worry. And, typically, it was the three who combined for the game’s lone moment of real attacking quality which culminated in Smith Rowe breaking the deadlock after 109 long minutes.