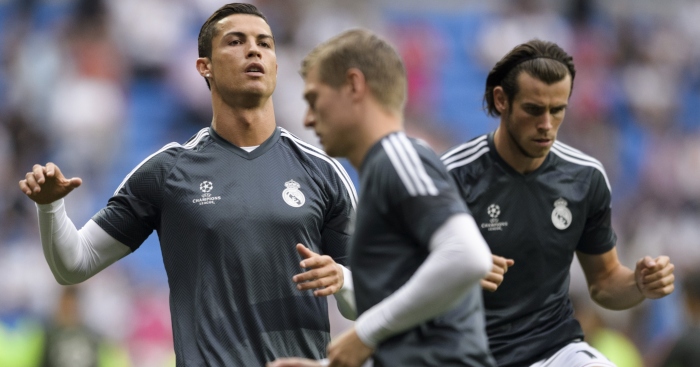 Manchester United are about to begin a rebuild of their squad, with the club said to be targeting young English players. That, though, would not address the woeful absence of character or leadership within their dressing room. These players might already have peaked, and their resale value might not be to Ed Woodward’s liking, but they would instantly improve United’s squad…

Toni Kroos
The Germany midfielder presumably thanks his lucky stars before he goes to sleep every night that he left David Moyes and Ed Woodward hanging in 2013. In the six years since, Kroos has won two league titles in Spain and Germany, and the Champions League three times in addition to nine other pots. United, meanwhile, have ended up here.

But there is a chance that Woodward could belatedly get his man. With Real Madrid planning a rebuild similar to United’s, Kroos may be deemed surplus to requirements at the Bernabeu. With Real and United said to be miles apart on their valuations of Paul Pogba, it seems increasingly likely that a player or two could be chucked in.

Kroos could walk into Carrington, lob his medals on the table and instantly assume the authority of the dressing room. United desperately need to reinforce their engine room and Kroos, who has won the World Cup and multiple Champions League titles with two of Europe’s biggest clubs, can replace Pogba, Ander Herrera or anyone else in the Red Devils’ midfield.

At 29, Kroos is hardly finished and still possesses the talent to lead by example, as well as pushing those around him. Leroy Sane will testify to the German’s high standards: “He has to improve his body language,” Kroos said of his international team-mate last September. “He’s a player who has everything you need to be a world-class player but sometimes you have to tell him he has to perform better.”

Christ knows what Kroos would make of Anthony Martial.

Cristiano Ronaldo
If ever there was a time for United to re-sign Ronaldo, it should be now. Typically, though, just when United need him most, the persistent speculation about a return to Old Trafford has subsided into silence.

United are at the stage where Ronaldo’s goals and all-round genius on the pitch would be a bonus. His presence, focus and insatiable drive are the traits the Red Devils most need. Twenty-plus Premier League goals a season would be a massive perk too.

Whereas the players in the United dressing room can’t relate to the great figures in United history- even those as contemporary as the Class of ’92- Ronaldo’s presence is far more awe-inspiring than being shown around the Cliff, visiting the spot where Nicky Butt once scalded Peter Schmeichel’s cock with a kettle.

Even Roy Keane was happy to stand back and leave Ronaldo to it when the former captain saw the teenager’s work ethic when he arrived at United in 2003. Sixteen years on, Ronaldo could offer the kind of leadership Keane did back then, similar to what Eric Cantona gave Giggs, Scholes, Beckham and co, providing a template of the levels that should be expected at Old Trafford.

Will it happen? Almost certainly not. Juve might briefly mull over an offer which would give them a profit on the £100million they paid Real last summer, but with his first season in Italy defined by Champions League failure, Ronaldo will be determined to try again, regardless of how much his ego may be tempted by the thought of being United’s saviour.

Gareth Bale
Until recently, the Real Madrid winger would have been seen as the ideal figure to improve the mentality of the United dressing room. Bale employed Ronaldo-esque levels of application during his time at Tottenham – at one point Harry Redknapp wanted to use him in a part-exchange deal to sign Stewart Downing – to establish himself as the Premier League’s brightest talent and the world’s most expensive player, taking Ronaldo’s title and becoming his team-mate.

At Real, Bale had to be fight to be accepted, which eventually happened after he scored a stunning winner in his first Copa del Rey final and a header in the Champions League final against Atletico. Another three Champions League winner’s medals followed, crowned with a two-goal display in last year’s final against Liverpool, when Bale seemed to be on a mission to prove Zinedine Zidane wrong for dropping him.

A year later, though, Bale finds himself at a crossroads. Zidane is back at the Bernabeu and his view of Bale appears dimmer than before. Reports suggest that Bale has been told in uncertain terms that he has no role to play, and the fans have made clear whose side they are on.

Still, Bale is determined to stay at Real, not necessarily to prove Zidane wrong, but because he enjoys the lifestyle that a £500,000-a-week salary in Madrid provides.

If Bale’s motivation to play has waned to such an extent, then he probably isn’t the right man for United, even if Woodward would buy him anyway. But if he can rediscover the hunger that got him to Real in the first place, then he could be a huge asset.

Diego Godin
You might understand Woodward’s reluctance to move for Godin this summer given the United chief has had his fingers burned before. A year ago, when the executive vice-chairman was running his own recruitment campaign in spite of Jose Mourinho’s wishes, it seemed Godin used United to secure better terms on an Atletico Madrid contract he never actually signed.

Mourinho didn’t hold a grudge and was reportedly willing to try again in January before the axe fell upon him. Six months later, Godin is available on a free transfer, but Woodward is apparently nowhere to be seen.

Strange that, when you consider that two of the things United most lack is a competent central defender and a leader in the dressing room. Godin has won seven major titles with Atletico, including the La Liga title in 2014 and a couple of Europa Leagues in addition to reaching two Champions League finals. He has been the mainstay of Uruguay’s defence since 2005, winning 126 caps along the way, playing at three World Cups.

But rather than United, it seems likely Inter Milan will benefit from Godin’s experience next season, with Inter said to be paying the 33-year-old around £111,000 a week – roughly the same figure United are paying Marcos Rojo to do little short of f*ck all.

Mats Hummels
So United will have to look elsewhere for defensive reinforcements. How about another big name who might be more receptive to an approach than before?

Hummels was wanted by Moyes in 2012 and again by Louis van Gaal in 2014. Instead, the centre-back moved to Bayern Munich in 2016 and, like Kroos, the former Dortmund star must be pretty chuffed with his choices.

Now, though, the 30-year-old is no longer an automatic choice for Bayern, with Niko Kovac opting to rotate Hummels in and out of his XI this term. If that didn’t provide the motivation to prove himself, his axing from the Germany squad certainly should.

Hummels was among a Bayern trio ruthlessly culled in the wake of their World Cup failure last year, though his was the most controversial of Joachim Low’s cuts. The former Dortmund star is waiting on reassurance from Bayern that he won’t fall similarly out of favour. If that isn’t forthcoming, Hummels will consider his options, of which he will have plenty.

Aged 30, Hummels is hardly over the hill. Juventus are apparently interested; if he’s good enough for Juve, he would certainly enhance Solskjaer’s options.