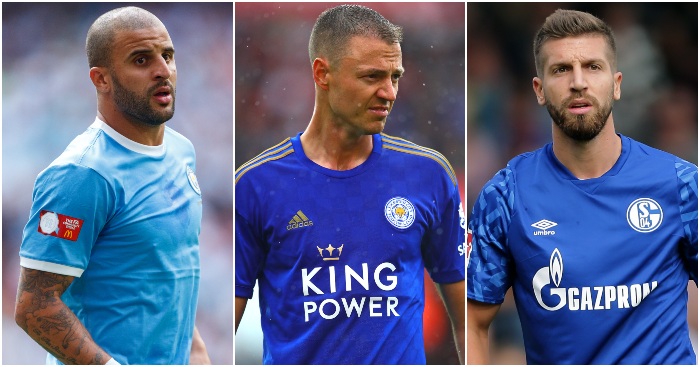 Manchester United – Jonny Evans
Ole Gunnar Solskjaer has just blown a world-record fee on Harry Maguire, but there’s another centre-back at Leicester that many reckon should still be at Old Trafford.

Sir Alex Ferguson is apparently one of those people and Evans’ move to West Brom for £6million in 2015 is said to have left the former manager ‘stunned’. The Northern Ireland defender played 131 Premier League games for United over seven seasons – five under Ferguson – but Louis van Gaal moved him on after injuries and some ill-timed ropey form conspired to deprive him of the chance to fill the boots of either Rio Ferdinand or Nemanja Vidic.

Evans explained his thinking in moving to West Brom: “You had Chris Smalling and Phil Jones, two young England centre-backs, Marcos Rojo had come in as a new signing. They were younger than me and if there was anyone that was going to move on…”

Four years later, Rojo isn’t fit for purpose, Jones is never fit at all, and Smalling has failed to establish himself as a leader in United’s defence. Evans, meanwhile, moved to Leicester from West Brom for another bargain fee and has rebuilt his reputation as one of the Premier League’s top centre-backs. As Ferguson thought he would.

Liverpool – Danny Ward
The Wales keeper moved to Leicester for £12.5million last summer. It was a deal too good to turn down since Alisson’s arrival from Roma seemingly relegated Ward to fourth choice behind Loris Karius and Simon Mignolet.

But Jurgen Klopp already knew he couldn’t rely on Karius or Mignolet and that sooner or later, both would be on their way. Karius has been shipped out to Besiktas while Mignolet has headed to Club Brugge after a year of diligent sitting.

Ward has done much the same at Leicester, who he joined after the World Cup presumably on the assumption that Kasper Schmeichel would be leaving. The Foxes first-choice stayed and had an underwhelming season, leading to even fewer offers this summer and, consequently, fewer opportunities for Ward.

Had he stood his ground at Anfield, or even left the club on loan again following his successful spell at Huddersfield, then Ward might be sat on Liverpool’s bench rather than Leicester’s this coming season, while the Reds would be spared the inconvenience of shopping for a stand-in stopper.

Manchester City – Matija Nastasic
Manuel Pellegrini never really revealed why he got rid of the Serbia centre-back in 2015, when Nastasic joined Schalke on loan before making the move permanent later that year. It turns out the player didn’t get much of an explanation either.

“I was thinking a lot: ‘What is the problem?'” Nastasic told The Guardian earlier this year. “After some time I spoke with Pellegrini and he explained I had to wait for my chance. In the end there were not so many opportunities to play.”

It wasn’t like that for Nastasic under Roberto Mancini, who made the youngster a first-team regular after signing him from Fiorentina in 2012 in a deal worth £13m plus Stefan Savic. But Nastasic’s face didn’t seem to fit under Pellegrini so he moved to Schalke.

There the 26-year-old has established himself as one of Europe’s leading centre-backs, with AC Milan said to be most keen on taking him to Italy. City have hardly missed him, but with Vincent Kompany having retired, Pep Guardiola is undoubtedly short in central defence.

Tottenham – Kyle Walker
It’s just not a summer for Guardiola unless he’s signed a full-back or two, and Joao Cancelo looks likely to put a smile on the Manchester City manager’s face should he complete the formalities around a £27.5million-plus-Danilo deal.

For Mauricio Pochettino, the opposite applies during this window. The Tottenham boss is shedding full-backs with Kieran Trippier deemed surplus to requirements and Danny Rose said to be available too.

Pochettino doesn’t seem overly concerned with replacing Trippier but going with what he has got at right-back – Kyle Walker-Peters and Juan Foyth – is something of a gamble on Spurs’ behalf. A year after it was thought that Tottenham had pulled the wool over City’s eyes by getting around £50million for Walker while replacing him with World Cup hero Trippier, how they might wish their former full-back was still around.

Roy Hodgson’s current options netted two Premier League goals between the three of them last season. Connor Wickham’s injury problems provide him with some mitigation, but Christian Benteke and Jordan Ayew don’t have the same excuse.

Former Palace striker Gayle has scored more Premier League goals than Benteke over the last two years – and he spent half of that time in the Championship. Being harsh, you might say the second tier is really Gayle’s level, evidenced by the fact that Newcastle don’t see him as a starter, while the main interest in his services is coming from Leeds, Stoke and West Brom.

But with three days of the window remaining and few options available to Hodgson, re-signing Gayle is a deal that could be done. And he couldn’t possibly be any worse than Palace’s other strikers.