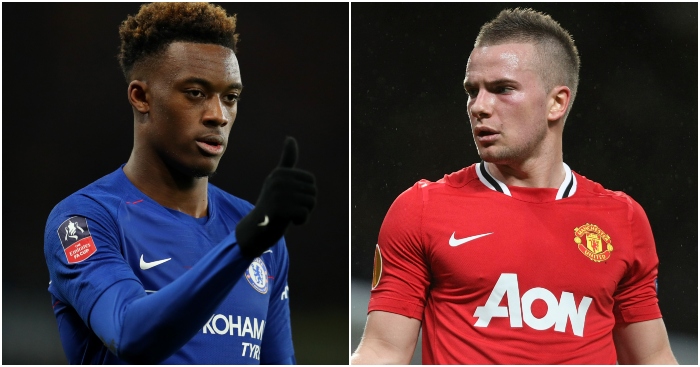 Callum Hudson-Odoi
Chelsea fans are gasping to get the winger in their first team, while Bayern Munich want to pay at least £35million to get him in theirs. A reminder: the 18-year-old has played 74 minutes in the Premier League and is yet to make a single start.

Maurizio Sarri seems extremely reluctant to give him that opportunity but while the Chelsea manager’s methods continue to be questioned, Hudson-Odoi’s position will only strengthen.

The teenager, a rare Chelsea academy graduate who seems to have a chance of thriving at the top level, is out of contract in less than a season and a half and his agent looks like having a very cushy job this summer if things continue heading in the same direction. Hudson-Odoi’s problems may only really begin when he finally does get the opportunity to play, wherever that might be. The expectation only continues to build.

Phil Foden
The Stockport Iniesta finds himself in a similar position to Hudson-Odoi, though his exclusion is because Pep Guardiola cannot find room in Manchester City’s XI, whereas Sarri simply seems determined not to in his Chelsea side. Guardiola has also offered rather more reason for his judgement to be trusted.

Foden’s potential is frightening. With England, he made the team of the tournament at the Under-17 Euros before winning the Under-17 World Cup and being named the competition’s best player. That earned him the curious honour of BBC Young Sports Personality of the Year.

Still, Guardiola has been unable to offer Foden any more than 13 substitute Premier League appearances. In the cups, Pep is rather more free and easy with his minutes and, as Steven Chicken pointed out in the wake of his latest outing, Foden has racked up three goals and two assists while making the starting line-up for seven of City’s nine FA Cup, Carabao Cup and Community Shield games this season. It all puts Pep in rather a tight spot: Foden certainly appears ready to play in the Premier League but who do City drop while they go toe-to-toe with Liverpool?

Maybe Foden should go out on loan, but City would perhaps justifiably argue he is better staying under Pep’s wing. Again, when he finally does earn a run of games in the Premier League, he has quite the name to live up to.

The youngster picks the ball up inside his own half, drives forward, and buries it!

His fourth goal of the season 👊 pic.twitter.com/h9gH5LwGu5

Tom Cleverley
While Cleverley sat on the sidelines nursing foot and ankle injuries during the late months of 2011, it felt like some Manchester United fans were anticipating the return of the new Zinedine Zidane to their midfield. Granted, the academy graduate made a promising start to his maiden season in Sir Alex Ferguson’s first team, but in the absence of the recently-retired Paul Scholes, it seemed many were getting carried away after a tidy three-and-a-quarter matches and an impressive cameo in the Community Shield.

United were 2-0 down to City when Cleverley came on at half-time at Wembley. United fought back and the then-21-year-old claimed an assist. He kept his place for United’s opening three games of the season, which took in wins against West Brom and Tottenham, as well as a ruthless demolition of Arsenal. But in the fourth, at Bolton, Cleverley was crocked by Kevin Davies.

He returned just over a month later, but 56 minutes into a Ferguson-approved “outstanding” performance at Everton, Cleverley picked up an ankle injury that would keep him out until March. During those four months, the anticipation grew to such a level that Cleverley, a tidy-but-harmless midfielder, stood little chance of meeting it. While he recovered, Scholes dug his boots back out, which effectively ended the Bradford Beckham’s hopes of establishing himself.

Henrikh Mkhitaryan
Jose Mourinho is never happier than when he’s dishing out some tough love – or being a b*stard, depending on how you view it. It’s a fine line.

One of the former Manchester United manager’s first signings at Old Trafford in 2016 was Henrikh Mkhitaryan for around £25million. Having not long ago returned a playmaker to Borussia Dortmund in the underwhelming shape of Shinji Kagawa, United fans had high hopes that the club might have learned some lessons and that the Armenian could make a difference to a side shorn of creativity and appeal by Louis van Gaal.

But Mourinho kept Mkhitaryan back, saying the former Shakhtar Donetsk star wasn’t ready for the hustle and bustle of the Premier League. The evidence of his first start when he looked hopelessly out of his depth against Manchester City made it a stance hard to argue with – but that didn’t stop many from trying.

When Mkhitaryan was given an opportunity in the Europa League, he generally made a good impression against continental opposition. In the Premier League, though, he offered only the odd flash, but those glimpses were enough for many United fans to take the player’s side over the manager.

Five assists in the opening three games of last season only added to Mkhitaryan’s allure but, as Mourinho perhaps anticipated, his form quickly fell off a cliff again. He was sent to Arsenal a few months later in exchange for Alexis Sanchez, and it is still hard to fathom which side grabbed the worst end of a particularly sh*tty stick.

Jack Wilshere
You can understand Arsenal fans hyping up Wilshere to be the next Xavi and their dismay at his failure to meet those stratospheric expectations. They had already seen their academy graduate come out on top against the Barcelona maestro and his mates as a 19-year-old in 2011 and his sad demise wasn’t entirely his fault.

That performance as a teenager in the last 16 of the Champions League gave Arsenal – and England – a taste and it was sweet enough to linger through the weeks and months Wilshere sat on the sidelines. He missed the entirety of the season after that breakout performance against Barca because of injury as Arsenal fans sat, waited and hoped that Wilshere – one of them – would return in 2012 and help reverse the mediocrity that had already begun to creep in at the Emirates.

But it wasn’t to be. Wilshere could never justify the hope Arsenal fans invested in him, mainly due to his physical fragility – though there were times the player did not help himself. He left last summer after what many would consider to be a creditable Arsenal career. It just wasn’t anything near as successful as many hoped.