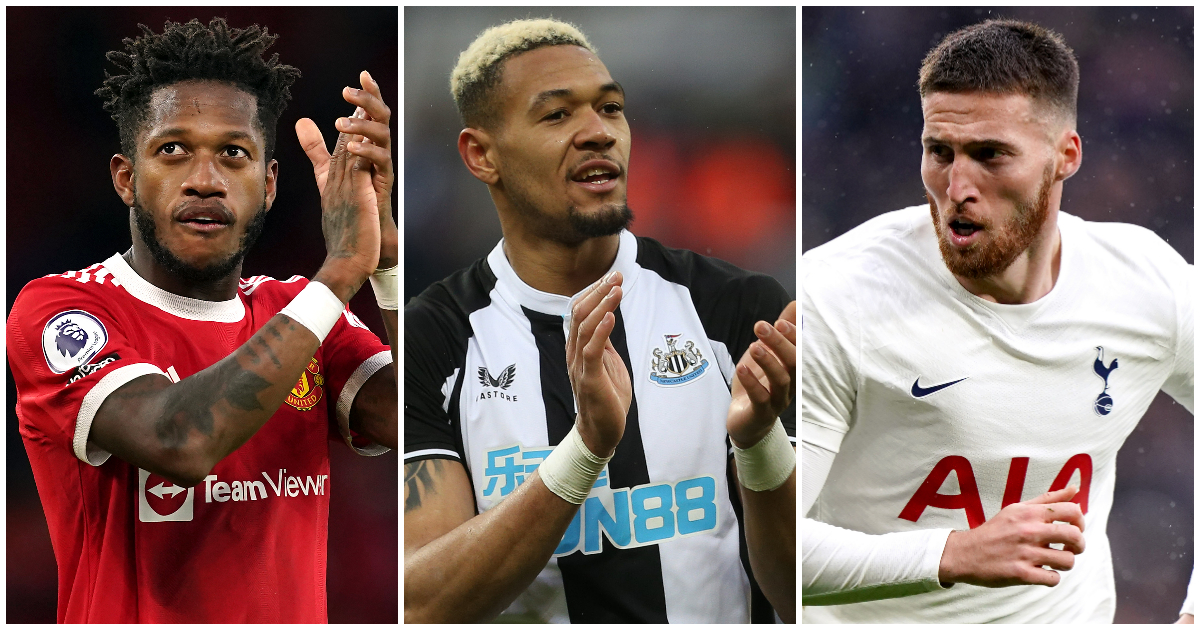 Joelinton was a joke figure at Newcastle but now he’s one of the Premier League’s best midfielders. Matt Doherty was finished at Spurs. Not now…

Joelinton (Newcastle United)
The Brazilian’s transformation in fortunes has surely been the greatest of the season, all sparked by a switch in position.

Eddie Howe is receiving plenty of plaudits on Tyneside right now and he deserves every word of praise for spotting Joelinton’s potential as a midfielder. Everyone aside from Newcastle scouts could see that the £40million man wasn’t a centre-forward but few saw a possible solution to help the club get value for money from their record signing.

The player himself deserves even greater credit. Joelinton was a joke figure on Tyneside and throughout the Premier League. It would have been easy for him to give up – perhaps the main reason he didn’t was because there was no other club willing to offer him an escape route.

Now, Joelinton has shown himself to be one of the best-performing midfielders in the top flight. In the era of specialists in the engine room, the Brazilian is an old-school box-to-boxer. This is a remarkable stat…

Since he started playing CM, no player in the Premier League has made more successful tackles than Joelinton (40).

Half of those (20) have come in the games since the ‘3 Jos’ started playing together, exactly the same amount as @Joewillock!

Matt Doherty (Tottenham)
“Doherty is another player who I’d like to underline the improvement in,” said Antonio Conte on Monday night after the Republic of Ireland international teed up two goals for Harry Kane in the 5-0 demolition of Everton.

It was the first time post-Jose Doherty has started consecutive Premier League matches. He scored one and assisted another at Leeds last time out before showing again on Monday night that perhaps his Spurs career isn’t as doomed as many thought.

Back in January, it was thought that Spurs needed a right wing-back as a priority, and the club made efforts to sign Adama Traore for the role. Traore went to Barcelona and with no thought for an alternative, Conte was made to muddle on for the rest of the season.

But Doherty’s form could save Daniel Levy a fortune in the summer. Not that there is anything complicated in his rapid improvement; it is simply a case of Doherty playing where he’s best.

“Obviously wing-back is the position I love,” he said after Everton were humped. “That’s the reason why I’m at Tottenham. I was playing in that position at Wolves.”

Fred (Manchester United)
The Brazilian midfielder began the campaign being viewed as the one player Manchester United to upgrade with the greatest urgency, and his early-season display against Everton – when he was muscled off the ball by renowned heavyweight Demarai Gray – did him no favours whatsoever.

But Solskjaer stuck with him – most likely because of the absence of alternatives – and Ralf Rangnick did likewise after Fred scored the first goal of the German’s interim era. His form under Rangnick has seen United fans ease off on Fred, as has Roy Keane. Or at least, he had…

“If Ole walked in here now, I’d grab him by the collar and say ‘why are you playing Fred in the middle of the park?’,” the former skipper said after United’s first derby humiliation.

He wasn’t done: “Anyone who tells me Fred is good enough for United – they are in cuckoo land.”

Fred’s form, though, made Keane reconsider. After the £52million midfielder scored against Leeds, Keane said: “Fred has definitely improved his finishing and attacking play in the last few months.”

But his defending still isn’t up to much: “Look at Fred,” Keane said in the wake of the Manchester derby. “You are fighting for your life and you have got a midfielder who is standing there like he is waiting for a bus.”

United fans have flip-flopped over Fred in a similar manner. Everyone can see the Red Devils need a better midfielder, but at least he’s trying, which is more than can be said for some team-mates.

Granit Xhaka (Arsenal)
The Arsenal midfielder has never pretended that he’s a fan-favourite at the Emirates and he should be applauded for possessing an ounce of self-awareness, even if he too often lacks the necessary self-control. As evidenced by the time he returned fire on the fans when his substitution was cheered in 2019.

But Xhaka has endeared himself more to the Arsenal faithful this season, even after his approval rating dropped dramatically in the wake of his daft red card in the 5-0 thumping at Man City.

So much so that Mikel Arteta admitted at the end of last year that he was considering handing back the armband stripped from Xhaka’s bicep by Unai Emery.

As for his relationship with Arsenal fans, the Switzerland midfield admits they will probably never be ‘best friends’. But at least they can tolerate each other now.

“I feel much more love than one or two years ago. I will make mistakes because everyone does. We are not perfect. But I will give 100 per cent in every training session and game.”

Forster was given a new five-year contract in 2017, when Saints were said to be wary of Manchester United’s interest in the giant keeper. United’s interest dissipated in line with Forster’s form, which slumped so low that he was dropped by Mauricio Pochettino and shipped off to Celtic on loan by Mark Hughes.

Saints fans, frustrated by errors and an obvious discomfort with the ball at his feet, hardly missed Forster during his two-year exile from the first team which ended last January when he was brought in from the cold to keep a clean sheet against Liverpool.

But Ralph Hasenhuttl was won over by Forster’s “open-mindedness about trying to develop his quality with the ball” and Saints fans have this season begun to feel comfortable with Forster in the Saints sticks.

How long he will be there isn’t clear since his contract is up at the end of the season while Alex McCarthy has signed new terms. Saints supporters would be happy to see him stay, but only on reduced terms to the £90,000 a week he was offered when he was attracting interest from the big hitters.