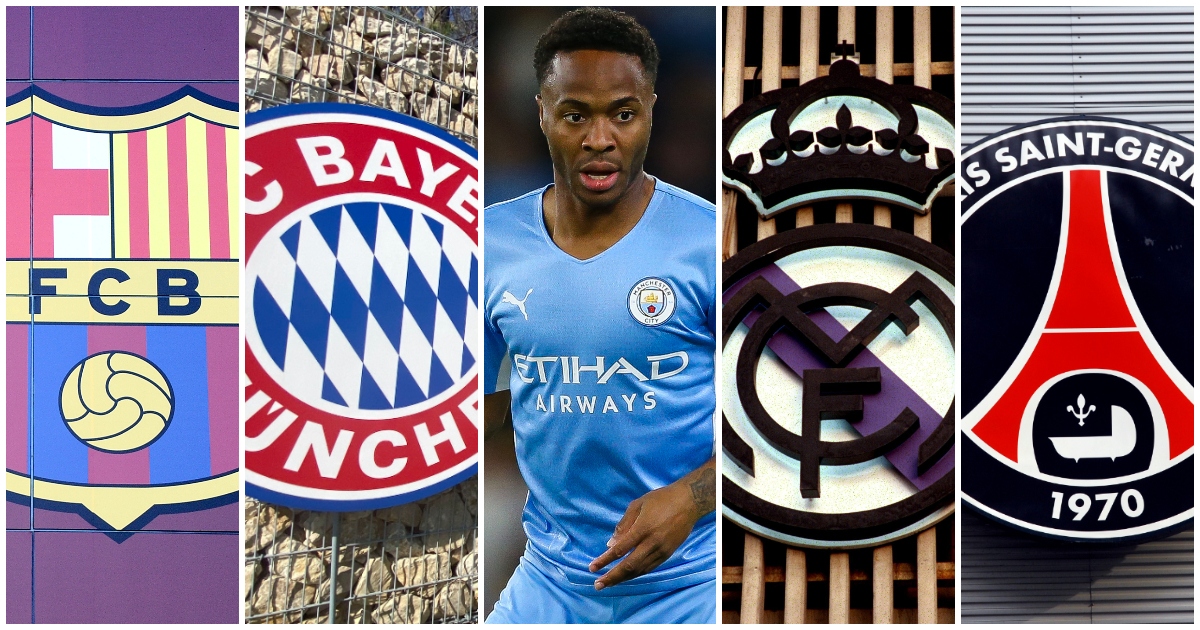 Raheem Sterling has a desire to play abroad, but where might he go? We assessed his chances of a big move to the continent, with Barca and Juve among his better options.

Raheem Sterling says he would consider the possibility of leaving Manchester City and the England winger quite fancies a move abroad.

“If there was the option to go somewhere else for more game time I would be open to it. Football is the most important thing to me.

So if the 26-year-old was to try his hand on the continent, where might he end up? We’ve looked at five possibilities.

Barcelona
The Barca link is the most recurring theme when it comes to speculation over Sterling’s future. Reports suggest the Catalans were keen to sign Sterling in the summer but they had a big enough job on just paying the players already on their books before they could contemplate the prospect of coughing up the kind of fee City would have demanded.

Apparently, Barca tried to borrow Sterling towards the back end of the window and having expressed a willingness to pay his current salary – regardless of whether they have the means – there is talk that they could resurrect a loan deal in January, perhaps with the option to buy.

Barca may be a reasonable fit for Sterling right now, though the Sterling of 18 months ago would probably have taken one look at the basket case Barca have become and thought twice about committing the final years of his 20s to a club in meltdown.

From October 2018: Is Raheem Sterling to Real the naughty boy’s next step?

Real Madrid
Real were heavily linked with Sterling a couple of years ago when he was on fire for City, and his representatives were reportedly invited for talks with the hierarchy at the Bernabeu.

Sterling, though, has since parted with Aidy Ward, the agent who spoke with Real in 2019 and had kept the line open. And the England star’s stock has certainly fallen since there was first talk of him becoming one of Real’s marquee signings.

That was prior to Covid and now Real are more focused on signing Kylian Mbappe. By the time they have paid the France star his desired salary, there may not be enough in the pot to meet Sterling’s current demands, which currently cost City in the region of £300,000 a week, especially when Real have more pressing matters to address than adding another wide attacker after Mbappe.

PSG
Should Mbappe move to Real, that would leave a vacancy in PSG’s attack.

When there were rumours of a possible City exit in the summer, the Parisiens were third-favourites to land Sterling, behind Barca and Tottenham. As a replacement for Mbappe, Sterling could be a good bet.

Sterling has shown similar versatility to Mbappe in being able to play across the front line. But if Sterling’s standing at City doesn’t improve, PSG may well look elsewhere if they need to distract their public from the fact they failed to keep Mbappe. Signing a City substitute on the cheap probably won’t cut it.

Bayern Munich
Bayern were also in the top five possible destinations for Sterling during the summer but the smart money would surely swerve the Germans.

Bayern were keen on Sterling once upon a time, many years ago when the winger was still at Liverpool and the Bavarians were hunting for a possible successor for Franck Ribery. Since then, Bayern have been shopping at City for wingers, with Leroy Sane making the move last year, and his presence in Julian Nagelsmann’s squad alongside Kinglsey Coman, Serge Gnabry and Jamal Musiala means Bayern are well stacked in that area.

Coman’s contract situation could change that, but if Bayern are going to move for an attacker, it would more likely be a centre-forward or Florian Wirtz, who can play off the left.

“If I want my happiness at a certain level I need to be playing football,” Sterling said this week. “I need to be scoring goals and enjoying myself.” The prospect of him being any more content in Munich than he is in Manchester right now seems remote.

Sterling among one per club Newcastle could sign in January

Juventus
Apparently, being offered to Juventus was one of the things that prompted Sterling’s increased drive to seek a new challenge away from City.

Reports suggested Sterling was dangled in front of the Old Lady when City were negotiating over signing Cristiano Ronaldo through the summer. That got Sterling’s back up at the time, but it might not be such a bad idea.

Juve are certainly short of a left-sided attacking option and there is little doubt that Sterling would be guaranteed more game time in Turin than he might be at Real, Bayern and PSG.

Could Juve afford Sterling’s salary? The Bianconeri are trying to move away from paying huge wages, with Ronaldo off the books and Aaron Ramsey being hawked around to anyone who might be interested.