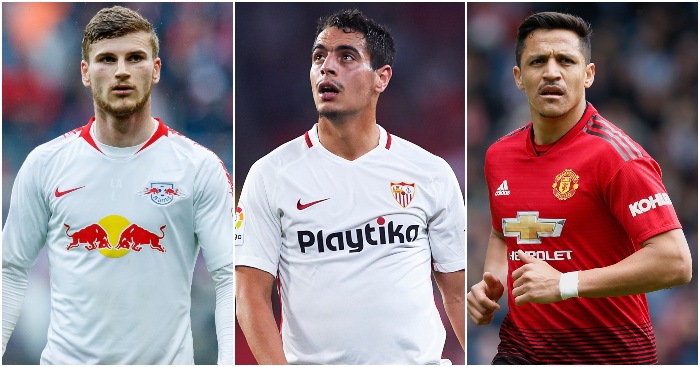 It seems likely that Romelu Lukaku will leave Manchester United before the deadline, most probably for Inter Milan. With whom will Ole Gunnar Solskjaer replace the Belgian? Should United replace him at all? Here are five possible options…

Wissam Ben Yedder
The Sevilla striker was heavily linked with United a few weeks ago but after it was reported that the Red Devils ‘have everything agreed’ for Ben Yedder, things went suddenly quiet.

The prospect of not being able to shift Lukaku will keep United from making a definitive move for a striker until the current No.9 is being paraded by Inter Milan. But should they return to the matter of Ben Yedder, then United will be acting in an uncharacteristically shrewd manner.

The numbers will certainly appeal to Ed Woodward since the 28-year-old’s relatively modest £36million buy-out clause compensates for the miles on his clock. The figures should also satisfy Solskjaer since Ben Yedder’s last season were 30 goals and 11 assists in all competitions.

Ben Yedder is the anti-Lukaku. At 5ft 7in, the former Toulouse forward is quicker and more nimble than the Belgium star and certainly a more natural finisher. So it is no surprise that PSG and Barcelona are also interested…

• directly involved in 0.8 goals per game across the season

Moussa Dembele
The Lyon striker is another French forward United reportedly thought they might snare for around £35million. But similarly, after initial reports at the start of the window, the trail seems to have gone cold while United dig their heels in over Lukaku.

Dembele is more like the type of target you would expect United to pursue. The former Celtic striker is young – he turned 23 last month – and it was thought he might be available at an attractive price, one that would still afford Lyon a vast profit on the £19.7million they paid Celtic a year ago, but still a figure which would provide much-coveted sell-on value since Dembele has yet to be capped by France.

In his single season in Ligue 1, Dembele netted 23 goals in all competitions to help Lyon finish third and reportedly catch the eye of Eric Cantona. But it seems he has unfinished business.

“I still have another four years on my contract, I will be at Lyon next season,” he vowed last month. And footballers never go back on their word…

Pierre-Emerick Aubameyang
Reports, however spurious, continue to swirl surrounding United’s interest in the Arsenal striker, the latest of which suggests a £62.1million is on the table.

Aubameyang’s appeal to United is obvious. The Gabon striker shared the Golden Boot with Sadio Mane and Mo Salah in his first full season in the Premier League since joining Arsenal in January 2018. Following his move from Borussia Dortmund, Aubameyang has netted 41 goals in 65 games.

Arsenal appear to be rather less incentivised to sell, however. Yes, United’s reported bid would represent a small profit on the £54million they paid Dortmund and Aubameyang turned 30 last month. That figure would free more funds for Unai Emery, who is trying to rebuild his squad on a shoestring budget unless he can generate more through sales.

But one of the few positives about Arsenal at present is the partnership between Aubameyang and Alexandre Lacazette. Selling Aubameyang may raise the necessary cash to buy Wilfried Zaha – or at least make a more serious offer for the winger – but the Gunners would arguably be no better off.

For Aubameyang, a move to United would certainly warrant a hefty par rise, but the striker has more chance of keeping a regular place at Arsenal since Solskjaer seems dead set on using Marcus Rashford as his first-choice centre-forward. Champions League involvement might have cushioned that blow but United are certainly in no position to offer that as a guarantee any time soon.

27 – Pierre-Emerick Aubameyang has netted 27 goals in all competitions this season, a haul only Sergio Aguero (31) can better among Premier League players. Gold. pic.twitter.com/Z4Lt16L7Rz

Timo Werner
With Werner now in the final year of his contract at RB Leipzig, the noise around the Germany striker seems to have dulled just as it should be at its loudest.

Perhaps that is because most people assume Werner, like much of the hot German talent, is already Bayern Munich bound. The 23-year-old seemed most likely to move to the Allianz Arena but it Bayern appear in little hurry to get a deal done.

RB Leipzig have been trying to persuade their prize asset to sign a new contract but should they accept defeat, they will not let Werner go cheap. Around £50million is being demanded of Bayern which is making them consider leaving it a year and moving again when Werner becomes a free agent.

Such a delay and Bayern’s uncertainty over Werner’s value, especially in a central role, offers United – and anyone else –  an opportunity to move in for a versatile striker who has netted 40 goals in the last two seasons.

Liverpool have been heavily linked with Werner – but United were uppermost in his mind when he spoke to FourFourTwo last year.

“Manchester United and Liverpool were the teams I watched quite a lot in England. They were the two that I’m a little bit a fan of, because they have so much history. When Alex Ferguson was the coach, United won everything and were outstanding. Playing in the Premier League is a dream for me. I would like to play for two or three clubs, and Manchester United are one of those clubs. But when I have to decide, I’m more Manchester United than Liverpool.”

No replacement
With United in dire need of strengthening the centre of their defence and their midfield, there is a possibility that Solskjaer will look to fill the sizeable hole left by Lukaku without turning to the transfer market.

Before the United manager mentioned Alexis Sanchez earlier this week, the Chilean’s existence had been somewhat forgotten this summer. The forgettable form of United’s highest earner is to blame for him becoming almost inconsequential at Old Trafford, but Solskjaer was keen to talk up Sanchez when asked about the expensive flop who has scored five goals in a season and a half so far: “If we get him firing, he can get us 20 goals easily.”

It is a stand Solskjaer has little choice but to take. There is no interest in relieving United of Sanchez’s wages; they are stuck with him so they might as well try to tease some form from him.

Alternatively, at the other end of United’s pay scale you will find a hugely exciting crop of youngsters, Tahith Chong and Angel Gomes among them.

But Mason Greenwood is the striker giving many United fans the feels. “Mason will definitely play more games,” said Solskjaer before the 17-year-old netted his first senior goal against Leeds on Wednesday, and the hope at Old Trafford is that the manager stays true to his word.

Greenwood’s versatility will certainly boost his prospects, as Solskjaer explained: “He can play all front four positions, he can play 10, seven, 11, nine, he’s a natural footballer. With his left foot coming in, he can play anywhere along the frontline.” That wand of a left peg has prompted comparisons with Robin van Persie, though Greenwood seems more likely to get more minutes in a wide position, with Anthony Martial and Sanchez acting as Rashford’s primary back up through the middle.

Maybe United do not need a replacement for Romelu after all?