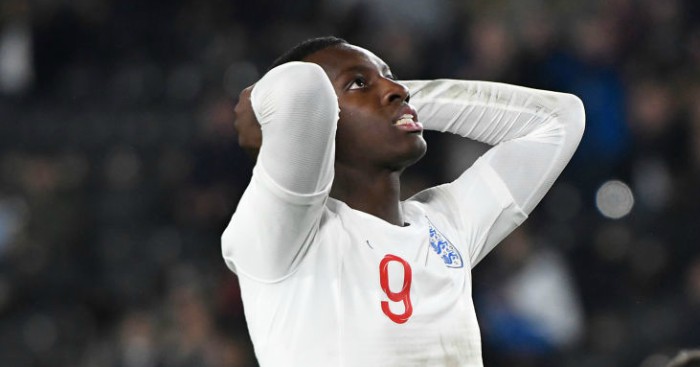 With 17 of the 23-man England squad having played in the EFL at some stage in their careers and Chelsea trio Tammy Abraham, Mason Mount and Fikayo Tomori all called up having been on loan in the Championship last term, we take a look at five current Football League stars who could hope to get the Three Lions nod in the near future.

Eddie Nketiah – Leeds United (on loan from Arsenal)
Leeds United’s on-loan striker from Arsenal might not be first choice at Elland Road, but the predatory teenager has far more chance of getting the call from Gareth Southgate than the 26-year-old Patrick Bamford.

It will take a superb effort for any player to score more goals from inside the six-yard box and a Marching On Together tattoo will adorn my body (Marcelo Bielsa can choose the limb/other) if any player wins more points than the 19-year-old this Championship season.

It is hard to envisage any child growing up dreaming of being a super-sub, but Nketiah has all the qualities which make him suit the role perfectly and his youth is not one of them. The current England squad boasts four strikers, all of whom are first choice for their clubs. Should Nketiah help Leeds reach the Premier League, it would only take a couple of months of scoring from the bench – be it for his parent club or another loan – to figure in England’s plans when a goal is needed late in games.

Grady Diangana – West Bromwich Albion (on loan from West Ham United)
West Brom are the near-perfect team of the Championship, and one player who exemplifies their wonderfulness is the on-loan winger who has lit up the second tier with great attacking play and greater goals. There are few better loanees in the second tier this season.

With nearly a goal every other game, the 21-year-old is developing late but developing at a rapid pace with senior football finally under his belt after spending his teenage years on the books of West Ham’s youth team with fleeting appearances as a senior Hammer.

I promise you @WestHam this Diangana guy sucks. Like absolutely shocking on the ball. Just trust my word, no need to watch the tapes

But regular football at this level is proving beneficial to both player and Baggies, and potentially England in the future.

Diangana will take heart from Leicester City midfielder Harvey Barnes, who spent the first half of last season on loan at the Hawthorns and is now a regular Fox, and is surely only a couple of injuries away from a call himself.

Jarred Bowen – Hull City
Perhaps the most consistent performer on this list and Hull City are very fortunate to have the 22-year-old still on their books. Fourteen and 22-goal returns in the last two seasons already look set to be beaten if the forward remains on Humberside past January, when you would bet he will already be in double figures once more.

Bowen could easily figure in any non-top six Premier League side and it seems only a matter of time until his pace, raw talent and predatory finishing are terrorising top-flight defences. As for the international scene, Bowen has never received a call-up at youth level but then, neither had the likes of Rickie Lambert, Kevin Davies or Jamie Vardy. And Bowen is better than at least two of those three.

While the wings are not a department where England are seriously lacking right now, Bowen is only a double figure goal-scoring season in the top flight away from telling reporters he thought his call up was “a prank by the lads”.

Dael Fry – Middlesbrough
While Bowen has escaped the attention of St George’s Park, Middlesbrough centre-back Fry has England youth experience galore having represented the young Lions from U17 right through to U21 level, even scoring twice for the latter. Fry began making a name for himself in the 2018/19 season, playing in the heart of Middlesbrough’s defence for more than half their league matches in a season where no team conceded fewer times.

Statistics like that won’t go unnoticed, especially given England’s weakness in the area beyond Joe Gomez, um, Harry Maguire, and *checks notes* maybe John Stones. Actually, forget waiting for Fry to make a move to the top flight or to even rid himself of this impossible club; one of the few bright lights of Middlesbrough’s recent dark times could be one of the final key components in the England set-up.

Now just get him out of the hands of Jonathan Woodgate and Aidy Boothroyd and don’t let Sean Dyche cast Ben Gibson-like aspersions at the Toulon Tournament winner and England have potentially got themselves a good one here.

Josh Brownhill – Bristol City
The oldest player on this list perhaps, but also the most reminiscent of the man we all wish was English, John ‘McGinniesta’. Brownhill is not a goalscorer, he is not the most creative player in the division and does not possess the highest defensive numbers in Bristol City’s side. So why is he on this list?

At 23 years old and with no England youth experience or Premier League minutes to his name, the reasons for believing Brownhill could be of international quality do not jump out immediately. But Brownhill is an enigma of a player, as Robins supporters would be only too happy to inform you.

One of the best passers in the division and one of increasingly few players in the modern game equally adept at playing in a two or three-man midfield, Brownhill’s ability to control the tempo of a game is a quality not always exemplified by England’s current, shallow roster of midfielders. One season of Premier League football with a successful team could see him earn a surprise call-up that few saw coming. You heard it here first.