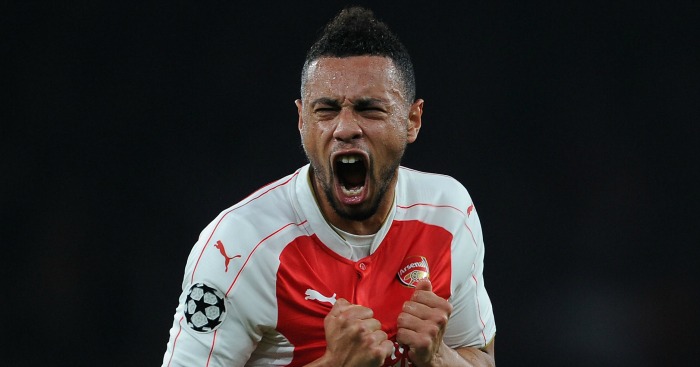 This time last year, we published a feature on the five – no, six – Premier League players disliked by their own fans. Twelve months later, and Marouane Fellaini might not have engineered a complete U-turn, but Jose Mourinho’s favourite child is no longer a villainous figure for his own fans.

Francis Coquelin
It was only as recently as May 2015 when Arsene Wenger issued his most memorable and impassioned defence of Francis Coquelin. “‘If we had bought Coquelin at Christmas for £40m, everyone would say ‘what a signing’,” he said. “I am sorry he didn’t cost any money, he is still a good player.”

It was a fair assessment at that stage. Coquelin, although not nearly as good in possession as Santi Cazorla and Jack Wilshere, not nearly as dynamic as Aaron Ramsey, and only just as French as Mathieu Flamini, was a welcome addition to the midfield. He added grit, determination and an edge to an Arsenal side constantly found to be lacking in all three.

Time has not been kind to Coquelin, however. He was a breath of fresh air at first, but the stench of mediocrity now lingers over the 25-year-old. He has become error-prone and lacklustre, a fading force as opposed to a midfield enforcer.

The most damning statistic is thus: Coquelin has missed ten games this season, and Arsenal have won each by an aggregate scoreline of 30-5. He is a curse. He is also one of only three outfielders to have started their five Premier League defeats, alongside Nacho Monreal and Alexis Sanchez. He is a squad option relied upon far too often as a first teamer.

Moussa Sissoko
A man who made no secret of his desire to move from Newcastle to Arsenal, it is little wonder that Moussa Sissoko continues to struggle against the tide of some Tottenham fans six months after his record-breaking move to White Hart Lane. That the most expensive player in the club’s history flirted so openly and outrageously with Arsenal will never sit too comfortably with some supporters.

Those hoping that Sissoko could win them over with his performances will have been disappointed. The Frenchman has undeniably improved of late, but he set the bar so low it would have been difficult not to trip over it. He went ten games without scoring or assisting a single goal, and is yet to make his mark on the scoresheet after 21 appearances. He was even dropped earlier in the season by an angry Mauricio Pochettino. The 27-year-old who outclassed Paul Pogba in the summer has been largely anonymous this season, even against League Two opposition in Wycombe in the FA Cup.

Simon Mignolet
Of the six players who appeared on this same list this time last year, only one remains. And that one somehow remains between the posts of the Liverpool goal. Loris Karius might have dislodged Simon Mignolet as the club’s starting goalkeeper at the beginning of the season, but the new arrival did not quite manage to knock the Belgian off his f***ing perch.

It seems almost surreal that Liverpool are back to square one with their goalkeepers. Karius was supposed to be the antidote, the all-saving, all-catching young blood from Germany forcing Mignolet into the shadows. A succession of mistakes has set the 23-year-old’s development back, and he now faces three more months on the bench unless Jurgen Klopp decides to change goalkeepers for a third time this season. With errors creeping back into Mignolet’s game after a relatively positive return, that might be the only option. Maybe just keep alternating them after six games?

Claudio Bravo
But as disliked as Mignolet is at Anfield, he is a relative deity in comparison to Claudio Bravo at Manchester City. Many were displeased about the decision to displace Joe Hart in the summer, but they begrudgingly accepted that this was Pep Guardiola’s way. The consensus is that it was not only the Spaniard’s first mistake, but his biggest.

The fact that he has not saved a single shot since January 2 is alarming, but the true disappointment lies in his apparent strength. Bravo was signed as a key exponent of Guardiola’s short passing style, but the 33-year-old looks uncomfortable in possession and spreads panic throughout his defence. It might still work, but City need a capable goalkeeper in the present, not a 30-something one for the future. If only they had a decent replacement out on loan somewhere.

“It has been difficult, I have to be honest and say so. Of course there are some games you just want to forget.”

So yes, when West Ham’s summer signing admitted last month that there are “some games you just want to forget”, he probably had a few in mind. And that is without even mentioning the ones where he was booed by his own fans. It’s Havard knock life, after all.