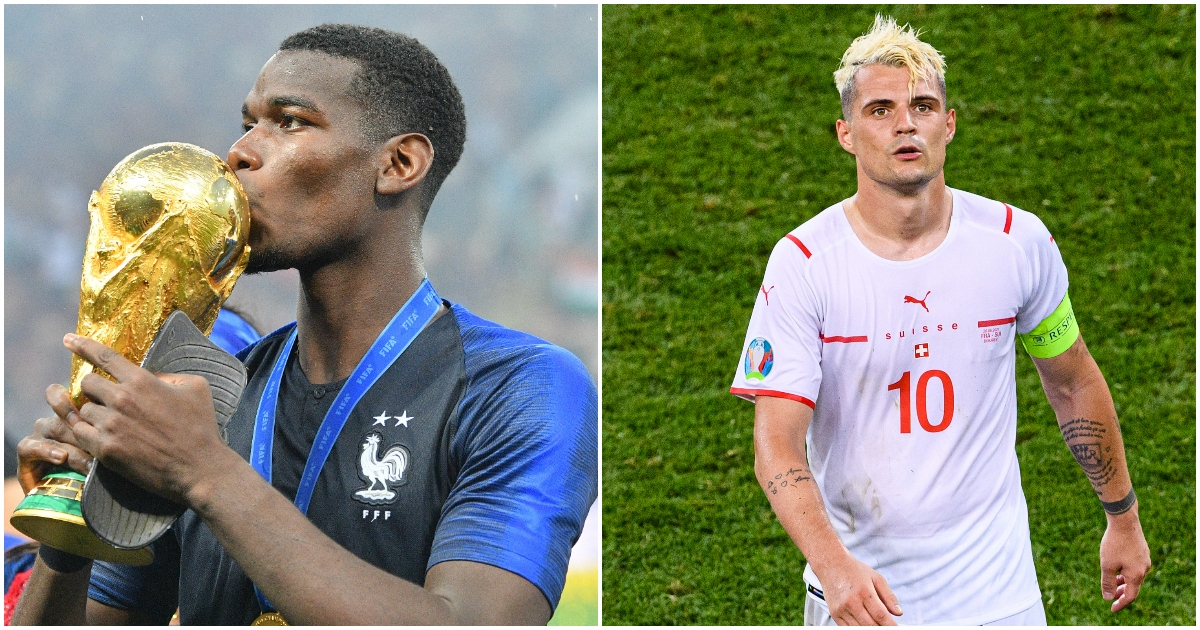 Representing your country on the international stage is something that players do with great pride. Some are clearly happier playing for their national team than they are their club, however. We have picked out five Premier League stars who perform better for their national side than their club…

Granit Xhaka (Arsenal and Switzerland)
The 29-year-old Switzerland captain was one of the best midfielders at Euro 2020, only for his summer of excellent football to coincide with transfer rumours. A move to AS Roma seemed very likely, with Jose Mourinho commenting on Xhaka’s Instagram posts, to the player himself discussing his future – obviously saying he was “focused” on the European Championships when questioned on the matter. There were rumours the Arsenal midfielder had agreed a five-year deal with the Italians, that he was willing to give up bonuses to leave north London, and that the Gunners were only wanting around €20m for his services.

€20m for one of the first names on Mikel Arteta’s team sheet? Baffling. And the Serie A club didn’t even want to pay that fee. Given his performances at the Euros, why Roma decided not to cough up the fee must have been because they couldn’t afford him, right? The £34m signing of Tammy Abraham tells us differently. To add to the oddness of this transfer fiasco; once Roma pulled out of negotiations, Xhaka signed a one-year contract extension at the Emirates.

Xhaka has not been a bad player for Arsenal. The fact they finished in the top four for 20 consecutive seasons, and have failed to do so once since he joined really is just a coincidence. While he has been an important player for the Gunners, he hasn’t exactly set the league alight. He has divided opinion throughout the Emirates fanbase, and it seems you either love him or you hate him in north London. Xhaka is definitely not hated by the Swiss fanbase, however. He has 98 caps for his country, scoring 12 goals, and made his debut for his country at the age of 18. At Euro 2020, he absolutely ran the show against the world champions, bossing the midfield as Switzerland beat France on penalties. Xhaka picked up a second-half yellow card, however, and missed the quarter-final penalty shootout defeat to Spain. It is feasible to suggest the Swiss side could have beaten Luis Enrique’s men had the Arsenal playmaker been available.

Paul Pogba (Manchester United and France)
Another player that divides opinion, but on a much larger scale. Pogba looks like the best midfielder in the world and a potential Ballon d’Or winner nearly every time he represents Les Bleus, but for United is often the scapegoat after a poor result, and has rarely looked like the player that dominates matches for France.

There is absolutely no doubting Pogba’s ability, he was the man of the match in the 2018 World Cup final, scoring a fine goal as France battered Croatia in Moscow. It just seems like he cannot be arsed for United half the time, and that is probably down to the lack of trust in the managers he has worked under, as well as the personnel around him. The France squad is ridiculous, whereas the Red Devils have utilised some questionable players over the years. Given their summer transfer business, Pogba should be performing better this term, and he hit the ground running, making four assists against Leeds United on matchday one, overtaking his tally from the Premier League season prior. It is safe to say his form has dipped in tandem with United’s.

Pogba’s future is uncertain, but what we do know is that his agent, Mino Raiola, will get him a sweet deal next summer, whether it be a move back to Juventus, or perhaps a switch Real Madrid, Barcelona, or PSG. An Old Trafford stay is possible, but it would be understandable if they don’t want to offer the 28-year-old a huge contract if he doesn’t consistently perform for United as he does under Didier Deschamps for his country.

Andriy Yarmolenko (West Ham and Ukraine)
Xhaka and Pogba are better for their countries, however, Yarmolenko looks like a completely different player altogether. The 32-year-old forward has played 66 times for the Hammers, netting ten times. They spent £18m on the Ukraine captain back in 2018 after an excellent time at Dynamo Kyiv in his home country, followed by an average spell with Borussia Dortmund.

Admittedly, Yarmolenko has had his fair share of injury and fitness problems since moving to England. He seems fit and ready to go this season, but as West Ham’s form is so good, it is near impossible for the Ukrainian to break into David Moyes’ starting XI. Thankfully for the attacker, they have plenty of matches having qualified for the Europa League – where they have helped themselves to 10 points from their first four games – and are in the quarter-finals of the Carabao Cup.

Yarmolenko has 105 caps for Ukraine and as captain is one of the first names on the team sheet. He also has an eye-catching 44 goals for his country. Only three England players in history have more international goals than that – although that number will probably be four if Harry Kane gets on the pitch at all against San Marino. At Euro 2020, Yarmolenko was Ukraine’s best player; he scored a screamer in one of the matches of the tournament against the Netherlands. Against Macedonia, he scored one and assisted the other in a 2-1 win, and assisted in a last 16 extra-time win against Sweden. West Ham fans were definitely watching on, baffled as to who this fella was, because he is definitely not the one that has been playing in claret and blue.

Harry Maguire (Manchester United and England)
The first Englishman on this list – and there could have been a few more – Maguire actually looks like a competent defender for the Three Lions, plus a pretty solid threat from attacking corners and free-kicks, whereas for United this term, he has looked like a fish out of water.

Perhaps it is a bit knee-jerk to include the ex-Leicester City man on this list due to his performances this season, but it is fair to say that he does perform better for England than he does United. Maguire’s struggles are down to the lack of defensive structure under Ole Gunnar Solskjaer, his clear lack of fitness after being brought back too early by the Norwegian following a calf injury, plus a potential Euro 2020 hangover.

Maguire has 40 caps for his country and is a crucial player under Gareth Southgate. Similar to at United, in fairness, the conversation is always ‘who will partner Maguire for England’. At least it was before John Stones came back to form. En route to the Euro 2020 final, the 28-year-old starred for England after missing the first two matches due to an injury, scoring in the quarter-final win against Ukraine.

The reason Maguire’s national team form is better than his club form seems pretty simple when you think about it. In the Premier League and Champions League, he is constantly playing against world-class forwards and excellent teams. For England, however, facing opponents like San Marino, Albania, Andorra and Iceland, respectively, can make anyone look good. Playing in a proper system, under a manager with a clear philosophy helps. Hence the point mentioned prior, many England players could have featured in this list. Raheem Sterling, Harry Kane, Luke Shaw (all based on their form this season, primarily) and Jordan Pickford spring to mind.

Miguel Almiron (Newcastle United and Paraguay)
I must admit, if Almiron performs worse for Paraguay than he does for Newcastle, we would have to ask the question; why does he still get called up? No offence, Miggy.

The 27-year-old broke the Magpies’ transfer record in 2019, joining from MLS side Atlanta United for around £20m. It ended Michael Owen’s 14-year record (£16m from Real Madrid) and also broke the MLS transfer record. Joelinton’s arrival five months later then obliterated that record, and Joe Willock’s permanent move from Arsenal in the summer also overtook Almiron’s transfer. This is all pretty irrelevant, I’m just showing that Newcastle don’t often spend big, but when they do, it doesn’t tend to go too well.

Almiron took 11 months to score his first Newcastle goal and now has 13 in 102 appearances for the northeast club. He is yet to open his account for the 21/22 campaign and last scored a competitive goal for the Toon in a 3-2 win over Southampton in February 2021. He bagged a brace that day, equalling his four-goal haul from the Premier League season prior.

Now, the former Atlanta playmaker does not exactly carry Paraguay on his back, but he is a lot more effective for the South American country than he is for Newcastle. Paraguay last appeared in a World Cup in 2010, and are not very good at the minute. However, while he struggles for Newcastle and his game time varies, Almiron is a mainstay in Paraguay’s starting XI and he helped Los Guaranies reach the last eight of the Copa America in the summer, scoring a goal and providing an assist in a 2-0 win against a decent Chile side along the way.