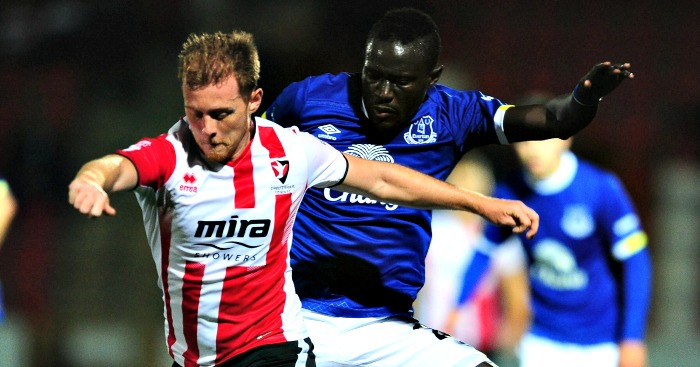 It’s safe to say the Checkatrade Trophy has been a wild success this season. Formerly the Football League Trophy, the competition has undergone a revamp, with the main change being that 16 teams from the Premier League and Championship would be allowed to enter.

Many, many, many top-flight clubs refused the invitation, but some did not. Here, Football365 takes a look at the most recent round of Checkatrade Trophy fixtures, and we pick out five Premier League squad members who have been relegated to taking part in the much-derided competition. The players on this list were signed for almost £30m combined.

Oumar Niasse
Ronald Koeman admitted himself that he “couldn’t understand” why Oumar Niasse would not leave Everton this summer, and it is not difficult to fathom the manager’s confusion. When the football world looks back in years to come upon the £13.5m signing of an unheard-of striker as Romelu Lukaku’s potential competition for a striker place, it will do so with similar bemusement.

Roberto Martinez described Niasse as “the type of player who can have an impact in any game” upon signing him in January, but within a matter of months it became clear that this would not be a successful union. The Senegal international was afforded just 142 minutes of Premier League action last season. That must seem like a luxury compared to this campaign, with Koeman far more ruthless than his predecessor in calling a spade a spade and calling a sh*te striker a sh*te striker.

The 26-year-old has not even made the bench for a single Premier League game this season, but did feature in the Toffees’ Checkatrade Trophy fixture against Cheltenham on Tuesday. He was substituted in the 57th minute, and did not warrant a single mention in the Liverpool Echo’s report on the 2-1 defeat. A reminder that Niasse is the fourth-most expensive signing in Everton’s history.

Charlie Adam
When Charlie Adam was asked of his feelings at not playing a single minute in any of Stoke’s first three games of the Premier League season, his response was somehow endearing. “It doesn’t help when you keep buying midfielders,” he said on September 9, presumably while staring at a picture of Mark Hughes, the Stoke manager flanked by two individuals whose faces had been crudely crossed out in red pen.

Those two men, of course, would be Giannelli Imbula and Joe Allen, the former signed last winter, with the latter pushing poor Charlie further down the midfield pecking order when he joined from Liverpool in the summer. Along with Glenn Whelan, their arrivals have consigned Adam, who made 22 Premier League appearances last season, to a role on the bench. He has played just 23 minutes this campaign.

Which is where the Checkatrade Trophy comes in. Stoke under-23 managers Glyn Hodges and John Perkins have been permitted to unleash an angry and frustrated Adam on the tournament this season, with unsuspecting young players around the country haunted by memories of toothy grins and mistimed slide tackles. The 30-year-old has played every minute of Stoke’s group-stage campaign thus far; the Potters are bottom, behind Bradford, Bury and Morecambe. The Scot scored against the latter of that illustrious trio on Tuesday; it was a consolation strike in a 3-1 defeat.

Callum McManaman
Who knew a slight winger who is the absolute antithesis of a towering centre-half would eventually struggle in the world of Tony Pulis? The Welshman made Callum McManaman his first signing as West Brom manager in January 2015, but the former Wigan man has slowly descended into nothingness at The Hawthorns. Just two years on from joining the club, he will be counting down the days until the window re-opens.

What sets McManaman apart from many in this list is that he did not even play in his club’s EFL Cup fixture – that being a defeat to Northampton Town on penalties. Instead, the 25-year-old has been afforded only games in the Premier League 2 and, of course, the Checkatrade Trophy. On Tuesday, he featured in a strong Baggies side which included Boaz Myhill, Craig Gardner and Jonas Olsson. They played Luton Town. They lost 2-0.

Yohan Benalouane
All Claudio Ranieri had to do was hand him a solitary minute at the end of a comfortable win, but no. Yohan Benalouane came within a Nathan Dyer of being handed a Premier League winner’s medal at Leicester. He could have been mentioned alongside the Buttners, the Wallworks, the Aliadieres. But, having played just four games throughout their incredible season, he was ineligible. By one game. One f***ing game.

Leicester are often praised for their business in the summer 2015 transfer window. N’Golo Kante, Christian Fuchs, Robert Huth and Shinji Okazaki all signed, and each individual played a key role in their eventual title triumph. What is often forgotten is that Gokhan Inler also joined for £3m, and Benalouane moved from Atalanta to the King Power Stadium for £5m. He played in the Foxes’ first two games of the Premier League season, but featured just twice more before joining Fiorentina on loan. He didn’t play a single minute for his temporary club, either.

Fast-forward to this season, and the 29-year-old has found himself struggling for opportunities again. Having not been able to find a club in the summer, Benalouane has maintained his match fitness in the Checkatrade Trophy, playing in the penalty shoot-out win over Sheffield United, then featuring for the full 90 minutes against Grimsby Town. He managed to keep them at arm’s length as Leicester secured a clean sheet. Go him.

Donald Love
Take a look at the bottom of the Premier League table, and you will find Love in a hopeless place. The Robin to Paddy McNair’s Batman, Donald joined Sunderland in a double deal from Manchester United in the summer, as David Moyes sifted through the long list of contacts in his phone to find the secretary at Old Trafford. The fee for both players was announced as a combined £5.5m, but Love was reported to cost just £1m.

To his credit, the 21-year-old started both of Sunderland’s opening Premier League fixtures. He was then demoted to a role as second-half substitute against Southampton, and has not played in the league since that August game. But he has featured in the Checkatrade Trophy, where his second-half goal inspired plucky Sunderland to a victory over Hartlepool.