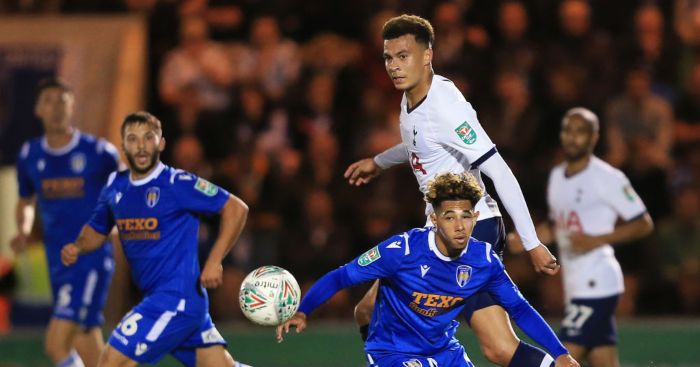 Some enhanced their reputations but…

Dele Alli
The reviews were certainly mixed, much in the way that fresh manure could be described as either pungent or fetid. Neither description is wrong, they are just verbalised differently.

So one outlet suggesting that Dele Alli ‘should be doing better against a lower-league defence’ is no different to another that felt his performance was ‘appalling’. Both saw a 23-year-old previously linked with Barcelona and Real Madrid toil against a defence that sits tenth in League Two.

Alli was not let down by debutant Troy Parrott; it was rather the opposite. It is difficult to work out whether it is more damning to create as many chances in 90 minutes as Eric Dier as it is to lay on as many goalscoring opportunities as Christian Eriksen and Heung-min Son both managed in 25-minute substitute cameos.

When even Jesse Lingard might start to take pity on you and sympathise with your plight, you know something has gone wrong. Neither he nor Alli have scored since January; both he and Alli summed up the respective demises of both themselves and their clubs in their most recent appearances. And there does not seem to be a regular starting place for either when their teammates are fully fit. For Alli, this really is not the sort of company he was meant to keep.

Seriously, what has happened to Dele Alli? I want 16/17 Dele back so bad 😤

Phil Foden
The problem with questioning why he isn’t playing is that it increases the pressure placed on him when he eventually does. Every pass is poured over, every tackle analysed, every moment highlighted.

Phil Foden would ordinarily dominate such games. His best Manchester City performance to date was in this competition last season against Oxford, but he also started and impressed at home to Fulham and away at Leicester in the fourth round and quarter-final. To stand out above the crowd in these circumstances is his bread and butter, the one thing he has always guaranteed. The demand for him to play would not exist if he disappointed on the smaller stages.

It was surely just an off-day, but such forgettable, anonymous displays only push his first-team breakthrough further away. And while that is a particularly harsh outlook, that is precisely what this level of hype invites.

Every @ManCity Fans Globally has their opinions and I have mine😎

Phil Foden needs to stay focus on learning his craft, stay away from the hype and most of all the destructive English Madia.

Che Adams
For every action, there is an equal and opposite reaction. And for every Southampton striker that impresses, there has to be a direct competitor whose stock falls ever so slightly.

Failure to score against Portsmouth would be no problem, were it not part of a deeper malaise. The 23-year-old has now gone seven games without his first Southampton goal, and didn’t even have a shot as the leading striker on Tuesday.

That is very much the inverse of his Premier League issue, where no player has had more shots (12) without scoring this season.

It will inevitably take time to settle into a side that is slowly rediscovering itself. In the meantime, there will be plenty who fear that 22 of his 45 career professional league goals coming last season was more indicative of a purple patch than prolificity.

What is going on with Che Adams? Can’t even get a goal against Portsmouth now 😬 not the firing young fresh striker we saw at Birmingham

Andre Gray
Five players have registered double figures for Watford goals in all competitions since the start of the 2017/18 season. Midfielder Abdoulaye Doucoure and Gerard Deulofeu, who only joined on loan in January 2018, are both on 12. Next is Roberto Pereyra (13), who took plenty of time to establish himself. But former record signing Andre Gray (15) should feel particular shame at sitting below Troy Deeney (17).

Being signed by Marco Silva and slowly marginalised, reintegrated then pushed back out again by Javi Gracia only offers slight mitigation. And while the arrival of Quique Sanchez Flores brings a clean slate for everyone, Gray’s has been tarnished. His immediate substitution after Watford made it 2-1 against Arsenal was a clear message, while his 13 minutes against Manchester City were mercifully short.

Given the chance to impress against Swansea, Gray failed. ‘A poor night up front for Gray, whose first touch repeatedly let him down. An uncharacteristic performance from the striker,’ was the Watford Observer’s take, with goalscorer Danny Welbeck ‘on his way to recovering full fitness’. When the summer signing finishes that journey, and Ismaila Sarr is fully acclimatised to the Premier League, where does Gray fit in?

Tom Davies
There might be no bigger victim of football Twitter’s unyielding taste for blood. Tom Davies, a 21-year-old academy product, youngest captain in Everton history and former Golden Boy nominee, has become the poster boy for this confusing, conflicted era at Goodison Park.

He is not perfect. His determination to play the ball forward at all times can lead to unnecessary risks being taken, and he lacks the recovery pace to account for frequent losses in possession. But his ambitious play ought to be applauded and embraced rather than questioned or criticised. When such condemnation so often comes from a particular section of his own beloved fanbase, it has an obvious effect on the confidence of a player who has only just turned 21.

With that said, Davies needs to start taking the sort of chances that came his way on Tuesday. He was not particularly poor against Sheffield Wednesday, nor did he show anything out of the ordinary. It was his mistake that almost gifted the opposition an early goal, and the Liverpool Echo gave him the lowest rating of any Everton player.

The calls in some quarters for him to feature ahead of Morgan Schneiderlin are understandable. The 11 Premier League minutes – all on the opening day – that Marco Silva has given him is also completely counter-intuitive. And the fact that he was captain on his last two league starts before being dropped from the squad completely for the next game does rather encapsulate how poorly he has been managed. But when a statement performance was needed, he mustered a mere whisper.

Tom Davies is no better than Morgan Schniederlin pass it on 👍🏻